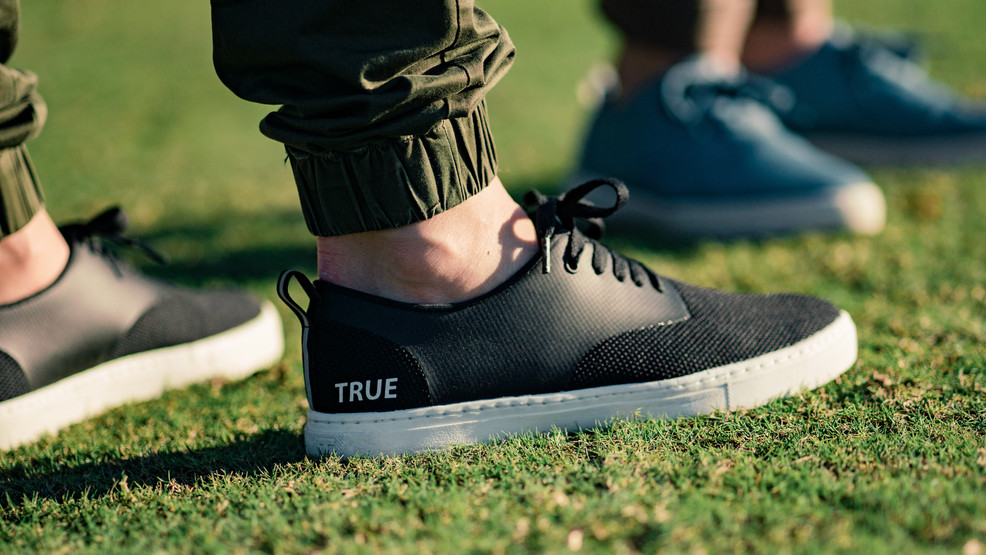 It's one of the best feelings in golf, like draining a birdie putt, or crushing a drive.

"I grew up playing with heavy, bulky shoes," said Jason Moore, President of TRUE Linkswear. "It was always such a relief to get finished with your round and take your golf shoes off."

TRUE is a Tacoma-based company that's changing the game when it comes to golf shoes, building them with the walking golfer and, yes, Northwest golfer in mind.

"A lot of people don't realize it, but if you're playing golf sometimes you're walking seven, eight, nine miles a day, up and down hills with a bag on your back," explained Moore. "So we wanted to build a shoe actually designed around the human foot. More ergonomic, more natural, providing support where you need it. A little cushion, tread, waterproofing. The things that will actually help you get through a four, six-hour round."

Comfort is only part of the equation. For the team at TRUE, the goal is to make shoes that are also stylish and, above all else, perform well. It makes sense given Moore co-founded the company with his brother, Ryan, who has played on the PGA Tour for more than 15 years.

"We started back in 2009. At the time [Ryan] couldn't find a pair of golf shoes he liked. We were trying to find something that was comfortable, something like a shoe we'd workout in or go for a walk or a hike in. We couldn't find anything on the market," said Moore. "Some people approached us with this wild idea of coming together to build a golf shoe company and we're like 'Sure, let's try it'."

The concept was an instant success, but Moore admits TRUE took off too fast and working with major retailers proved to be especially challenging.

"When you're sitting down with these huge buyers and big mega sports stores, they have really strong opinions about what they want," explained Moore. "They want [the shoe) in a certain color or size, maybe even certain features at a certain price point, and you start making compromises."

So three years ago, the brothers took back control of the company and came up with a new approach. They started selling direct to consumers online, with shoes designed just the way the duo, and their team, wanted them. The result, new designs like the TRUE Lux Pro and TRUE Lux Knit, which took about 18 months from concept to hitting the market.

"We call it selfish innovation. We have this process where we go, if we wouldn't actually wear it, if that's not a feature that would make the shoe better or more functional, if it doesn't feel better at the end of the day, then why are we putting it in there?" said Moore.

That approach has been a hit with casual golfers and pros alike. While Moore and fellow Washington-native Joel Dahmen are the only players officially sponsored by TRUE, the company has plenty of other fans on the PGA Tour.

"Any given week there might be six or eight guys on the PGA Tour lacing up our shoes," Moore said. "Really just having them stand behind our product and say I'm wearing it because I want to, not because I'm getting paid to, I don't think you could have a higher praise."

Ultimately though, whether you're a tour player or a recreational hacker, the folks at TRUE know success on the golf course is measured by more than just your final score.

"We always say, golf is about camaraderie. It's about getting out with your family, your friends and having a blast," said Moore. "So, for us that's all we could hope is you actually get out and enjoy the walk."