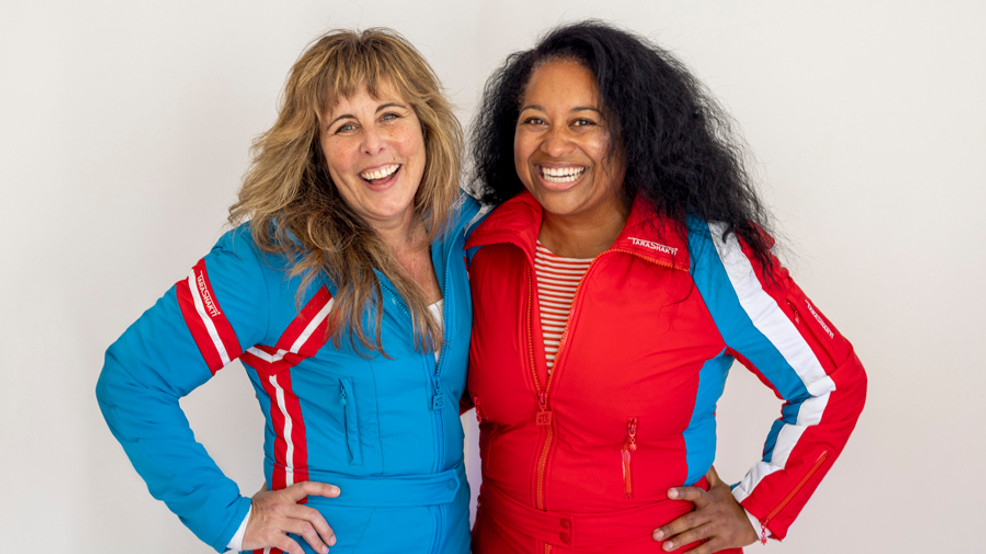 Two Seattle entrepreneurs Tara Clark and Quan Ralkowski launched their vintage ski suit brand, TaraShakti, to the delight of women everywhere. Through inclusive sizing, scholarships and sponsorships, plus purposeful events and partnerships, this women-owned, women-funded and women-of-color-founded brand is committed to expanding access and opportunities for underrepresented and marginalized groups. In total, $50 per suit is passed on to two important Seattle organizations; in the first year of business, TaraShakti donated a total of $5,000.

The inspiration behind the brand came from Clark's late friend, Holly Geiger, who in 2013 demanded that her women's ski crew show up in Whistler in onesies.

"My friends and I were so happy to meet her demand," Clark says, "because in 2011, Holly was diagnosed with glioblastoma and given 1-5 years to live, leaning heavily towards the one year. She was still with us after two years, so when Holly asked to show up in vintage ski suits, we didn’t think twice. We felt so lucky she was still with us."

Clark immediately discovered she had a deep, indescribable love for vintage suits and skied in them with her young boys, "I created a ski video parody to Macklemore’s 'Downtown' called 'Downhill,' raising money for brain cancer research while expanding my collection/obsession to 100 vintage suits. Thanks to research and treatment provided by Seattle-based Ben & Catherine Ivy Center for Advanced Brain Tumor Treatment founded by the late Dr. Greg Foltz, Holly far exceeded her prognosis, living 10 years beyond diagnosis. She passed away on October 9, 2021. Had she not received the cutting-edge treatment from the Ivy Center, TaraShakti would not exist. Because of that, we choose to honor our origins and contribute $25 from every suit sold to the Ivy Center."

The TaraShakti origin story immediately resonated with Ralkowski as well, because — in a strange twist of fate — her mother also passed away from cancer, and Dr. Greg Foltz was her brain surgeon.

"Dr. Foltz was an extraordinary human," she says, "and the work he did gave my family three additional years with my mother. During those three years, my mom lived her life to the fullest which, when I listen to Tara speak about Holly and her ski crew, is exactly what TaraShakti embodies."

Clark says that the star power comes from their fashion-forward winter pieces being incredibly comfortable, high-performance suits. The water-resistant outer fabric has stretch not found in most winter wear, allowing the suits to fit all shapes of women from size 0 to 14.

"We will stay focused on the feminine fit as we work to thoughtfully develop extended sizes so all sizes can experience the magic of TaraShakti suits," she promises.

She adds that many women are hesitant to wear a one-piece, thinking they don't have the “right figure” to look good.

"But when they try on a TaraShakti suit," she says, "they immediately light up and discover they look amazing."

Ralkowski also raves about the vintage-inspired suits' cut and style, "Most ski wear on the market are designed by men. But our suits are designed, developed and tested by women, for women. Most women are used to wearing multiple, bulky layers that leave you looking like a potato, but our suits are sleek, comfortable and truly flattering on everyone! I’m an XL and usually pretty self-conscious about what I wear, but the second I put this on and looked in the mirror, I thought, 'Well damn, I’ll rock this everywhere.'"

The duo shares a commitment to expanding access and opportunities for underrepresented and marginalized groups. As they continue to build the TaraShakti Foundation, they are creating partnerships with organizations and artists to further their mission of "igniting powerful moments of positivity, possibility and connection."

Ralkowski says that, as a bi-racial Black and Latina woman who grew up skiing, she was often the only person of color on the slopes, "Working with organizations to bring inclusiveness and access to the mountain is so vitally important. Using our platform to amplify the amazing work of organizations with this mission is one small way TaraShakti is committed to creating a more inclusive environment on the mountain."

Clark also talks about two projects dear to her heart — Believe Love Unite and World in My Backyard. Formerly, she was a professional photographer for 15 years, supporting her partner as he pursued an education in medicine. They met as agricultural volunteers with the US Peace Corps serving in the mountain kingdom of Lesotho, Southern Africa.

"As his career in emergency medicine became established," she explains, "and our two boys required more time and parental attention, I backed away from my photography business to support my family. But, not one to stay creatively idle and a global backpacker who loved meeting people in far corners of the world where most would not choose to travel (Haiti, Colombia, Laos, South Sudan, etc.), I realized I could foster my love of the world and the people in it by meeting the people who live in Seattle."

In 2012, she created The World in My Backyard Project, with the goal of meeting, interviewing and photographing a person born in every country in the world now residing in Seattle. The subject would always be the first person she met from that country, without vetting or trying to find the best story first.

"It was a life-changing project for me that I had to backburner because work and parenting required my attention," she says, adding that she hopes to return to the project one day. Plus, her first subjects, Lakpa Rita and Phurba Dikee Sherpa, led to TaraShakti contributing $25 per suit sale to the NW Sherpa Association.

The second organization, Believe Love Unite, is a grassroots campaign that began in late 2016 after Clark grew tired of being inundated with "negative/fear-based rhetoric that seemed to be coming from all sides in regards to people and the state of our world." She adds, "I believe deeply in people and just wished our country could stop and see each other, stand up for each other and find common ground." You can read the full story here.

What's next for these two? Clark says they're looking forward to pop-ups and trunk shows, both locally and nationally. "And then we get to play in the mountains on our 2023 Snow Tour that kicks off in Sun Valley on December 8," she adds.

"We’ll be in Capitol Hill October through December," she says, "which will give everyone a chance to experience the magic of TaraShakti!"