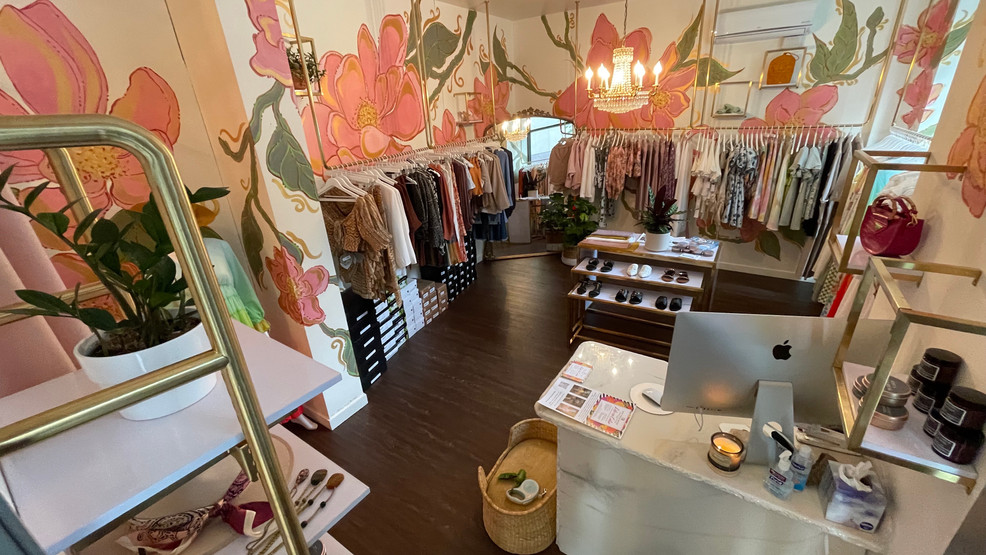 Rabecca Onassis Boutique is not your typical Seattle apparel store.

Among the usual grey and black clothing that walks the streets of the rainy city, owner Frilancy Hoyle struts in a bright yellow dress. With her store, she invites others to be bold with their fashion.

"I came to Seattle and said, 'I'm going to put every color somewhere in everyone's life,'" she said.

Inside her store on Western Avenue between Blanchard and Lenora, walls are freshly painted with floral murals, and racks are lined with colorful garments. At Rabecca Onassis Boutique, Hoyle wants Seattleites to know they can still look fabulous on a budget.

"My store is that; super affordable, high-quality pieces without breaking your bank," she said.

What's the story behind the name? Rabecca Onassis is actually Frilancy Hoyle's grandmother. By tradition, Hoyle's cousins and aunts all named one of their daughters Rabecca after her grandmother. Hoyle, contrastingly, named her boutique after her. She never met her grandmother but felt connected to her by their shared love of fashion and color.

"I don't have kids. I don't plan on having kids. Maybe, I don't know," she laughs, "this boutique is my baby."

Prior to opening her Seattle boutique, Hoyle lived in Michigan. Growing up, she couldn't afford the big-name brands, so she shopped secondhand at thrift stores. She styled thrifted outfits for herself, and soon enough, her friends were asking her to style them for their senior pictures. Local photographers caught on and hired her as their stylist for clients, which she did in exchange for her own senior photos.

A few years after high school, Hoyle knew two things: 1) she needed to get out of Michigan, and 2) she wanted to pursue fashion. So, in 2013, she dropped out of dental school, visited her cousin in Bonney Lake, Washington, and quickly fell in love with the area.

Soon after, she started as a professional stylist at Nordstrom. During this time, she posted pictures of her outfits on social media, and her followers started begging for the details. She took this as a hint she should start a fashion blog and quickly had a friend create a website for her.

After a few months, brands started reaching out to Hoyle. As more and more brands wanted to work with her, she realized the power she had in generating traffic to these brands. If she wanted to, she thought, she could do the same for her own brand. To test out her theory, she opened an online boutique.

"If this doesn't work out, it's online. I can just delete it and be done," she said.

Luckily enough, she never had to delete her online store. In the summer of 2019, she opened up her physical shop in Pike Place.

The store is entirely her — she refuses to have investors, so every penny comes from her and her husband. More so, every piece in her boutique is carefully selected. Often, she features local artists from the area, as well as designers from New York, Australia, Los Angeles, Brazil and London.

"All the pieces that I have in my store, I have to touch them, I have to try them on, and I have to wear them for like a few days just to see the feedback I get from my audience on my TikTok, on my Instagram, on my blog," she said.

"Business, since COVID, has been very trying and discouraging, but in the midst of all the craziness and what's going, I'm still hopeful," she said.

During the rough first months of the pandemic, Hoyle's 6-year-old niece showed her the app TikTok. Hoyle played along; maybe there was some way for her to use this form of social media for her business.

"I had no choice but to learn it [TikTok] because I had all this time on my hands," she said.

She thought the app was silly at first — she usually pictured dancing teenagers lip-syncing to popular songs. She would never have guessed that TikTok would be the driving force that kept her business open throughout the pandemic. When Hoyle posted a video of new product, TikTok users rushed to her website. Eventually, the clothes she posted on TikTok quickly sold out, thanks to her growing number of TikTok followers (over 384k and counting).

"I never thought in a million years that I'll be making money off TikTok," Hoyle said. "I remember when the previous president was talking about banning TikTok in the U.S., I was like, 'Oh my gosh, I'm going to be really screwed.'"

Her popularity is constantly growing on TikTok and Instagram, and it's because of the authenticity of her style. Her style is a reflection of her life.

"You're telling a story through your fashion without saying anything, so I let the clothing speak for me or what I'm going through that day," she said.

Transitional periods in life, like the one she's currently in, inspire her fashion sense. It's in these transitions that she feels most creative. In the near future, Hoyle would like to turn her creativity into her own fashion line. She says it's a big risk right now with the current pandemic. Nevertheless, she's ready to strike when the moment is right. She took a big risk when she traveled across the country to pursue fashion, but it's paying off; She's doing what she loves in a city she loves, and she hopes she inspires others to go after their passion.

"I'm inspiring other kids to chase what they're passionate about," she said. "You only have one life to do it."