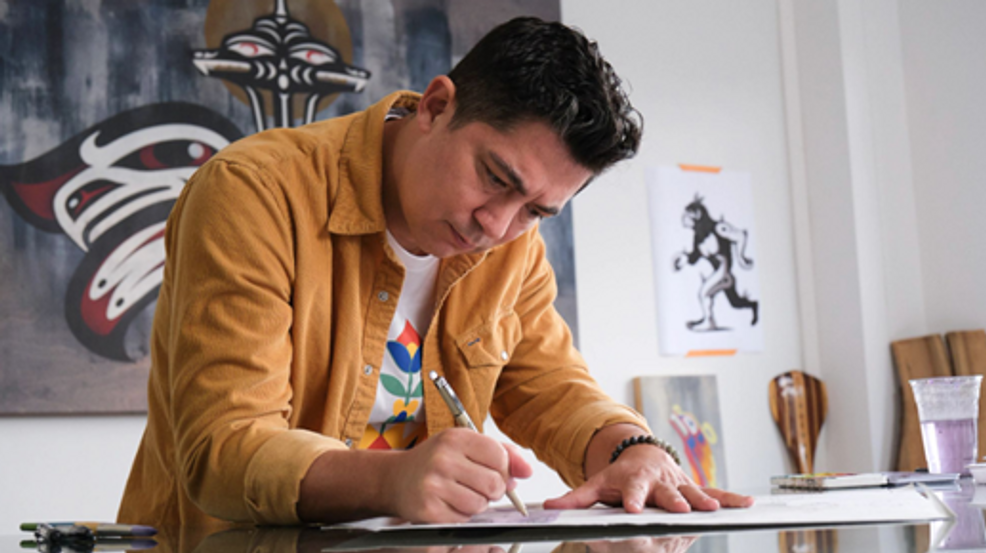 Gong is an artist, educator and public speaker who was raised by hisgrandparents in the Nooksack tribal community.(Image: Brooks Running)
SEE MORE

The collection illustrates Gong’s interpretation of Sasquatch through Indigenous art, culture, and the natural history of the Northwest and honors runners' undeniable connection to the land on which they run.

"When people are lacing up these shoes, I want them to be gently reminded that they are one with nature. It’s just as important to be stewards of the land as it is to care for our own physical and mental health," said Gong.

"It’s also marked with a visual nod to Coast Salish art, a crescent and trigon pattern. Beyond working with a Native artist, the business partnership underlying the project represents best practice for major companies that want to honor Native art, stories, or themes," said Gong.

"Sasquatch is a global symbol of the northwest and our natural environment," said Gong, "It also evokes the spirit of discovery that trail runners and hikers feel as they head into the woods."

"I was inspired by the idea of elevating the pop culture image of Sasquatch - which is often portrayed as a joke or a snarling 'ape man' - by creating a backstory that’s highly influenced by indigenous perspectives on Sasquatch. Like other characters from traditional stories, Sasquatch carries teachings for those who are listening."

Gong was raised by his grandparents in the Nooksack tribal community, "Being raised in Nooksack, I have a sense of shared identity that goes back thousands of years. This kind of deeply rooted identity gives me direction and drive because it comes with intergenerational accountability. How am I honoring my grandparents? How am I making the world a better place for future generations? While my sense of community has become broader in adulthood, I try to carry this value forward in my work," said Gong.

To further encourage runners to tread mindfully, Brooks is also partnering with the Snoqualmie Tribe Ancestral Lands Movement to amplify their mission and empower runners to recreate in a way that is centered in respect, rather than conquest, because acknowledging ancestral Native lands can deepen the running experience for all of us.

Louie Gong is an artist, educator and public speaker who was raised by his grandparents in the Nooksack tribal community. Although he is best known for his highly sought-after, hand-drawn custom shoes, Louie has received international recognition for a body of work that - like his mixed heritage - defies categorization. Louie is also the founder of Eighth Generation, a Seattle-based company owned by the Snoqualmie Tribe that provides a strong, ethical alternative to “Native-Inspired” art and products through its artist-centric approach and 100% Native-designed products. As a runner and talented shoe artist, Louie was the perfect partner to create a collection that celebrates the connection between people and the land they run on.