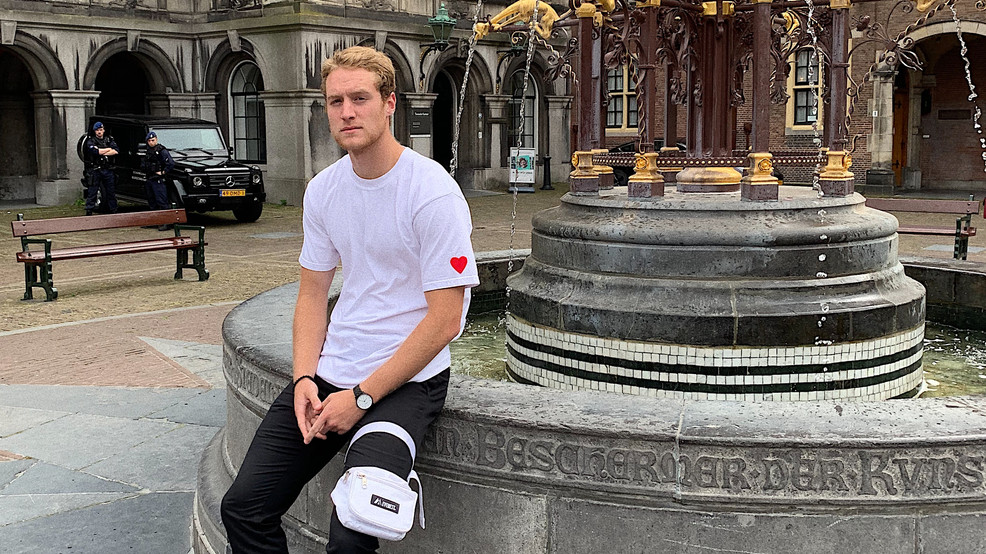 "It felt like an everyday sadness," said Porter, "I'd mask it, and try and be my normal cheery self, but my grades started to slip and my coaches and teachers noticed that I wasn't giving it my all."

His parents got involved and got him to a doctor, who diagnosed him with clinical depression. From that point on he was surrounded by support, but he still felt alone.

"One of the hardest parts about depression is you feel like you're stuck with it, it's not something that will go away, you just have to hunker down and get through it alone," he said.

Throughout high school and into his sophomore year in college at UW, Porter felt like he was battling this beast solo, but then something changed.

"I had this idea to literally wear my heart on my sleeve, to share with others how I was feeling on a day to day basis," he said. "I bought a pack of white t-shirts from Costco and went to the fabric store and bought some felt hearts."

It was a way to show others how he felt and start a conversation about mental health. During a study abroad trip in Amsterdam, Porter wore the broke heart shirt daily and people started asking questions. The positive feedback inspired Porter to launch HOMS Seattle (Heart On My Sleeve Seattle), a clothing line aimed to give people an outlet to deal with mental illness through clothes.

But Porter didn't start this venture on his own. Throughout his ongoing struggle with depression, one person has always remained a constant in his life, his childhood best friend and UW roomie Myles Gaskin.

"He's has been by my side since the seventh grade," said Porter. "We were roommates at UW, played football together in high school and in college, he is so much more than a business partner, he's a best friend."

Freshman year in college was one of Porter's deepest depressions.

"He [Gaskin] helped me through it," said Porter. "I told him things I've never shared with anyone else."

From childhoods best friends to football players to business partners, it just made sense.

Porter has personally designed the HOMS Seattle line from doodles in a notebook he draws during class.

"There are three hearts that stand for the difference phases your heart feels," he said. "I think it's important to acknowledge that if you have a broken heart, own it, but also know it will be whole again one day."

The HOMS Seattle clothing line is just a start for Porter.

"Since launching the line I've had random parents reach out to me concerned about their kids' struggle with depression and I want to serve as a voice to those in need and I strive to be a resource for parents" he said. Plus, helping others has really supported Porter's own mental health journey.

"I can't even express how amazing this has been for me personally, the creative aspect is so therapeutic," said Porter. "If I could go back and talk to my freshman self in high school I'd say 'everyone has stuff going on, you're not alone and no problem is too small.'"

What's next for Porter? "I hope to write a book one day about mental health,"

As for football, Porter says he'd love to chance to play in the NFL. "It all depends on how the season goes, it's every kid's dream that holds a football to go big isn't it?"

If you are experiencing suicidal thoughts or have concerns about someone else who may be, call the National Suicide Prevention Lifeline at 1-800-273-TALK (8255). You will be routed to a local crisis center where professionals can talk you through a risk assessment and provide resources in your community.