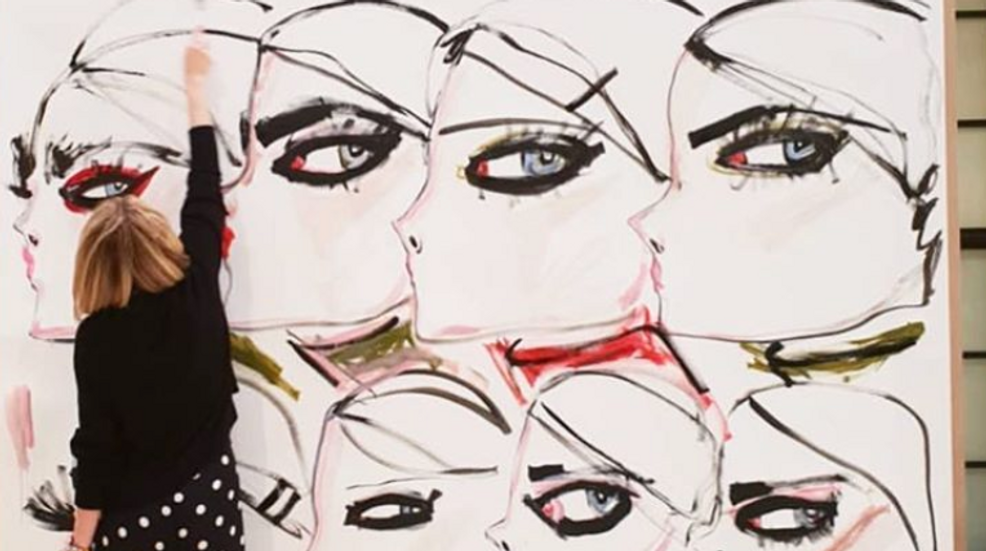 High Fashion. It's a world of glitz and glamour, of flashbulbs, runways and couture gowns. Many will never have a chance to wear designer like Gucci and Valentino, but fashion illustration gives people a chance to appreciate, maybe even worship the clothes, in a different way.

"It allows people who don't necessarily have access to high fashion brands to invite a high fashion vibe into their home," explained Blair Breitenstein, who is among New York City's most in-demand fashion illustrators. "It gives me a reason to have this fantasy world in my life because I wouldn't normally be wearing these designers."

Breitenstein has worked with some of the biggest names in the industry, like Chanel, Prada and Sak's Fifth Avenue - her art has graced the pages of major magazines and she's amassed a serious following on social media. But her passion for fashion and art began growing up on Mercer Island, and spending time with her grandpa, an abstract painter, and grandma, a serious fashionista, who just might be Breitenstein's biggest fan.

"The way my grandma dresses - she still dresses this way to get the mail, she puts on a full outfit. She gets her hair done every weekend in a beehive - full jewelry, clothes at all times. So I think I was really just inspired by her love of fashion," she said.

As a child, Blair often flipped through the pages of her grandma's copies of W Magazine, Vogue or Town and Country. She also collected...shopping bags.

"The Nordstrom shopping bags during Christmastime when we were growing up, they had illustrations on them," said Breitenstein. "When I was a 7-year-old I would save every bag and every gift card from Nordstrom that had an illustration on it."

Breitenstein didn't initially pursue art as a career. She got a communications degree from Washington State University and went to work at an ad agency in Seattle. Then she started sharing her fashion illustrations on the internet.

"Etsy was the platform that made me realize people were interested in paying money for my artwork because people were buying my prints. They were $25 and I would make them at Kinko's," she said. "It made me realize people wanted what I was creating. From Etsy, I started using Instagram. Instagram is where I started tagging brands, magazines and creative directors. With Instagram you can see when you're tagged in something, so I just kind of caught the attention of some important people."

One of those important people was an executive at Oscar de la Renta, who invited her to New York to sketch backstage and from the audience during their fashion show.

"I remember seriously crying at my desk when I got that email because by then I had started getting a little bit of professional work. So, I started thinking 'It would be a dream to go to a fashion show'. When that happened the only word I can think of [to describe it] is surreal. I had literal tears because it was one of my dreams coming true," she said.

Working with de la Renta opened doors. She traveled to Europe for two seasons of fashion week with MAC Cosmetics and designed international packaging for the cosmetics brand Fresh, among many other memorable projects. But, its Blair's approach, her style - that sets her work apart. It's abstract, playful and often spontaneous.

"Sometimes a drawing will take me ten minutes and I don't think that means it's any less of a piece of artwork," said Breitenstein. "I think it just adds a fun dynamic to my work having it be quick and having you see little mistakes like a drip of water. I think those things make it unique and fun and not too serious."

Her pieces often focus on the subject's eyes and include a vintage vibe, something that continues to resonate with her fans and big brands, including one close to home.

So, what's next for Blair? With fashion shows on pause, she's finding new inspiration in the world around her like household items, food or simply the view from her roof.

"I think part of my future is going to be trying new things and different subjects and I'm really excited about that."