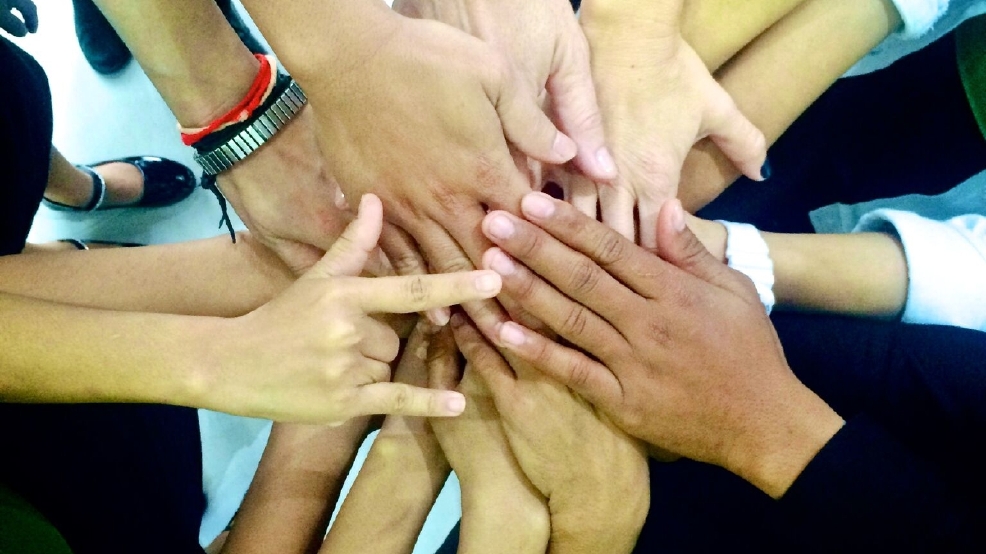 The aim of the program is to transform the lives of trafficked teens and children globally into confident, self-sufficient and financially independent individuals. They established a salon in Cambodia were survivors can go to be safe, learn skills and rehabilitate. It's called the Kate Korpi Salon and Academy in Cambodia, and is a high-end western-style salon and academy currently staffed by western-trained stylists. (Image: Justice and Soul)
SEE MORE

Talk about a life changing decision. One day Seattle salon owner Matthew Fairfax is working with a client, the next he's off to Cambodia to fight sex trafficking. It's really ALMOST as simple as that.

Fairfax owns James Alan Salon and Spa in Shoreline, and was perfectly content to go on doing that until, he says, a conversation made him do a 180.

"A client from my salon was doing work over in Cambodia and asked for help," said Fairfax, "I said no – in fact, I think I may have said 'HELL NO' - but given that she was a client, I was encouraged to have coffee with her. Two hours later, hearing all the horrors of trafficking and realizing that some of the survivors were younger than my granddaughter, I knew I had to do something. When I approached my salon team, they agreed".

Along with partner Lauren Ebright, Fairfax founded the Justice & Soul Foundation. Both had been separately introduced to the horrors of sex trafficking and the impact on young women and men around the world; Ebright through her church and Fairfax, as mentioned above, through his client. The aim of the program is to transform the lives of trafficked teens and children globally into confident, self-sufficient and financially independent individuals. They established a salon in Cambodia were survivors can go to be safe, learn skills and rehabilitate. It's called the Kate Korpi Salon and Academy, and is a high-end western-style salon and academy currently staffed by western-trained stylists. These stylists are primarily from the United States and other developed countries, some full-time and some volunteer guest artists. They work with the survivors - turned students - in a positive, safe environment. The students are selected from partnering non-governmental organizations for the program, and tuition is provided through scholarships from the salon profits. All profits in general from the salon go toward supporting the academy.

At one point, Seattle was actually number FIVE in the nation for trafficked teens, which really brought the issue closer to home for Fairfax . As part of this story, I was able to speak with a brave trafficking survivor, who wanted to remain anonymous - let's call him Chris. Right away, I learned that this issue is not black and white.

It was 9 p.m. on a Tuesday here in Seattle when I found myself FaceTiming with a 20-year-old boy in Cambodia who had been through more trauma in one day of his life than I think I could ever be strong enough to face in a lifetime. Looking at Chris, you'd never guess that - behind that giant smile and kind eyes - he's a survivor of sex trafficking. He credits his happiness now to all that has drastically changed in his life.

His story is heartbreaking; he lost his mother at a young age and was left to be cared for by an abusive father. Eventually, Chris ended up in an orphanage where his physical abuse continued, and sexual abuse started. By 16, he was on his own. Lost, confused and in a downward spiral - Chris traded sex for money and gifts. He says he found himself trapped in an underworld; bullied for being gay, so depressed he strongly considered suicide.

"Matthew gave me hope, a smile and a real purpose," he said. After he lost his mom, all he sought in life was love. To love, and be loved in return. Yes, it sounds like a line out of a Disney movie, but it was really that simple. But Chris' road wasn't the road of a fairytale character - it's still a struggle every day. But through teachings at the salon's academy - like self-esteeming building workshops, life skill classes and assistance building a career path - Chris felt like his future was bright for the first time, ever.

Chris admits he often lied to others in the past to protect himself, but he's proud to say he's changed and is growing. As a gay man in Cambodia he still feels the daily struggle, fear and rejection from his estranged family and society. But he's never felt out of place at the salon. In fact, he feels at home.

"For the first time I can share my feelings," said Chris. And - be accepted by his peers.

After graduating from the program Chris decided to stay at the salon to continue his advanced education and to work as a stylist. He remembers graduation day as a huge milestone. He did say he woke up that morning yearning for his mom.

Somebody hand me a Kleenex.

Want to get involved? Here is how.

Tell every stylist you meet to volunteer in Cambodia – they need one month of time and talent. Donate money. Fixing this problem is expensive and all of us need to help. Not everyone can go to Cambodia but everyone can donate $10 or $20 per month and make a huge difference. Read up on how to spot the signs of a trafficked person – we all need to take part in the solution. AND COME TO THE FASHION SOULSTICE this Saturday, March 25th. It's the program's annual fundraiser and how the majority of their budget is achieved. But more than that, it's a celebration of students and their accomplishments! To find out more about supporting the cause, visit justiceandsoul.org.