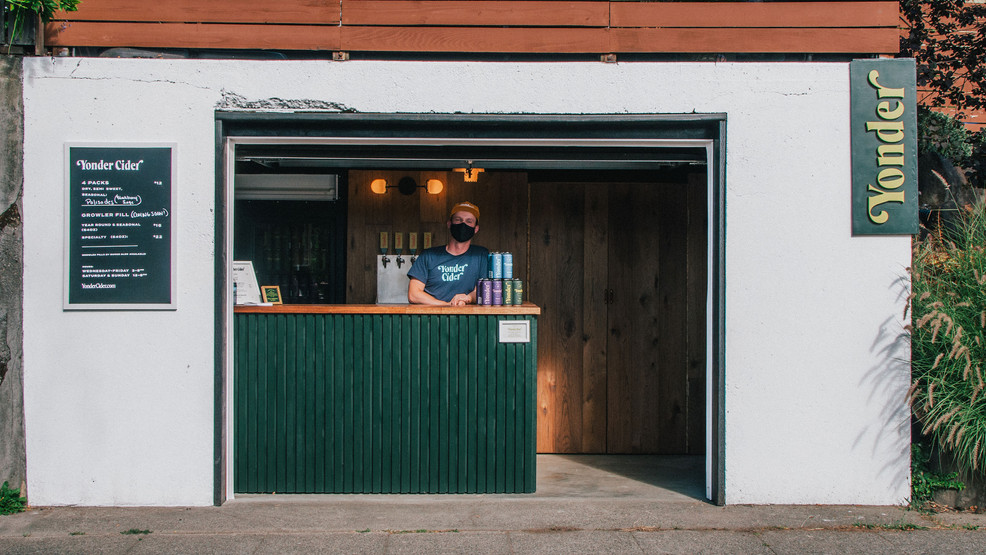 Yonder Cider: Thinking outside the box, inside a garage

When Yonder Cider set up shop in founder and president Caitlin Braam's garage last August, it instantly grew a following of devoted customers. And now, these cider lovers will have another spot to grab Yonder beverages at its recently-announced tasting room, coming to Ballard this summer!

Yonder has teamed up with Bale Breaker Brewing to bring a laid-back atmosphere encompassing beer, cider and rotating food trucks into one space.

"We're ready to grow," Braam said. "And we're excited about it."

When Braam and her co-founders Tim Larsen and Maddy Porter hit the ground running in January 2020 to plan Yonder's launch, they hit a roadblock three months in.

"The playbook was thrown out the window," Braam said. "We had to get creative."

About a month and a half into the pandemic, Braam's street in the Greenwood-Phinney Ridge area shut down as a Stay Healthy Street, and foot traffic increased. Her father-in-law casually suggested she sell the Wenatchee-sourced cider from her garage since so many people walked by constantly, and Braam took the challenge.

"I kept thinking about it, like, what if we could?" Braam said. "And then we took it to a really crazy level."

Because her garage is detached from her home and her street was shut down, the officials Braam consulted with designated her proposal a "gray area," which allowed her to open Yonder Bar. Once the bar, built to be COVID-friendly, opened up in August, it accrued regulars and out-of-town visitors.

"It's just cans to go, but it gave people something when there wasn't a lot to do," Braam said. "A place to go, a friendly face to see, a quick conversation - a community to build."

Couples would swing by on their nightly walks, families would bike to Yonder Bar every weekend, and even people would even make the drive from Tacoma - just to pick up a couple 4-packs. Neighborhood dogs - who are all on a first-name basis with bartenders - got into such a routine of stopping mid-walk for dog treats from Yonder Bar, they still sit in front of the garage door when it's closed, waiting for their reward.

That's unfortunately all the time now, as Yonder Bar closed on Feb. 15th after a member of the neighborhood complained to multiple authorities. They weren't in violation of any codes, beyond some zoning laws that ultimately caused the closure.

Since the closure, Yonder Bar has received thousands of signatures on a letter of support, and an outpouring of encouragement from the community. Through cookies, cards and comments, she saw the impact the bar had on the neighborhood.

"The things people were saying were just so heartwarming," she said. "Honestly, most people weren't talking about the cider. They were talking about the sense of community and how it was a bright light during the pandemic. That is what surprised me the most: how much it meant to people as a place to safely go during a pandemic."

Braam knew she had to challenge the closure and started contacting her city council members. Now, she says a new bill that was introduced two weeks ago will allow businesses like Yonder to survive during a difficult time after all. She's optimistic about what she calls the "Bringing Business Home'' bill, and with it in the works, zoning officials have approved Yonder Bar to open again on Saturday, March 6. If the bill passes, this could mean Yonder Bar is open for business for good.

Looking toward the summer, the team is prepping for the tasting room to open in the former space of Populuxe Brewing in Ballard. The space is large, so Braam reached out to Bale Breaker Brewing Company to collaborate.

To get around policies that don't allow breweries and cideries to share spaces, Braam, her husband and the three founders of Bale Breaker have started a distillery together, allowing the new space to eventually create new beverages like apple brandy and whiskey, that are byproducts of existing Yonder Cider and Bale Breaker products. Braam hopes the tasting room will open in early July. The distillery's name? Wise Fool Spirits.

"Because we'd either have to be wise to be doing this," Braam said with a laugh, "or complete fools."