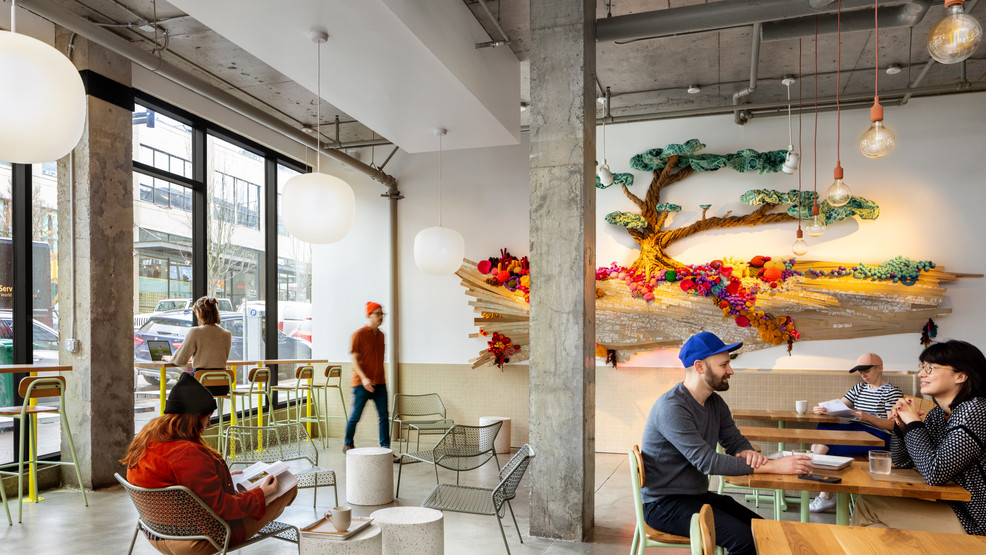 Make 'shroom for Wunderground Coffee, from the founder of Cupcake Royale

Besides the fact that Wunderground’s signature coffee drinks are infused with adaptogenic mushrooms like Lion’s Mane and Chaga, the space itself is – for lack of a better term – wonderful. Between the pastel-colored packaging and the whimsical wall sculpture made from knitted flowers, paper and wood, Wunderground Coffee in Capitol Hill is where wonder, creativity and connection collide.

While Wunderground Coffee may have only launched in June 2021, founder and owner Jody Hall, who also founded Cupcake Royale, is not new to Seattle’s iconic coffee scene. Prior to her Cupcake Royale venture, Hall spent 10 years working for Starbucks, way back when the coffee behemoth had only 30 physical stores.

From working in the marketing department to national partnerships and promotion, Hall aimed to “create an experience around coffee.”

Hall initially got the idea for infusing adaptogenic mushrooms in 2017 after mycologist Paul Stamets spoke at an event about how “mushrooms can save the world.”

Mushrooms, which have been used in Middle Eastern and Chinese medicine for thousands of years, are “foundational to how plants survive and how we survive, and are very foundational to life,” said Hall. “So, our goal with Wunderground was, we saw who was out there [making mushroom coffee], but you really trade off taste for [the health] benefit, and we’re like no – we want it to taste amazing."

Hall and her dedicated team spent years experimenting and testing blends of roasted beans from smallholder farms and adaptogenic mushrooms. In addition to a regular mushroom cold brew and filtered coffee, Wunderground also offers three signature drinks – including a vanilla latte and mocha – as well as two roasted and ground coffee and mushroom blends; Brainchild with Lion’s Mane, Cordyceps for extra brainpower and Hocus Pocus, which is made with Chaga and Reishi mushrooms to boost the immune system.

For the tea lovers, Dream Supply is an instant tea infused with Lion’s Mane and Reishi mushrooms, as well as chamomile. Patrons can also add vanilla mushroom syrup, a mushroom shot or a mushroom mocha syrup to drinks.

“Most supplements are bound up with the substrate of rice, yeast or something into your capsule. We don't touch that – we only use the fruit [of the mushroom] and you get way better polysaccharides and beta-glucans,” said Hall. “These are things that act like a thermostat in your body to fend off anxiety, cortisol, caffeine, and it keeps you level and then obviously helps your brain function.”

Between selling coffee, pastries, broths, sandwiches, salads and more – with chef Alyssia Lisle at the helm – Wunderground Coffee is a one-stop shop to refuel with superfoods and connect with old friends or new acquaintances.

“Wonder is that moment when we’re actually in the moment and we’re not distracted – we have a thought or an idea that we want to run with, get creative and get stuff done,” said Hall. “So the end state of regular consumption of our mushrooms is that we feel more grounded, we feel more present and we feel more connected... My goal is that my thread of everything I’ve done, whether it’s Starbucks [or] Cupcake Royale, is human connection... And I think that a coffee house is something that brings us together.”

Kelly Stroh is a freelance writer for Seattle Refined. Follow more of her work here.