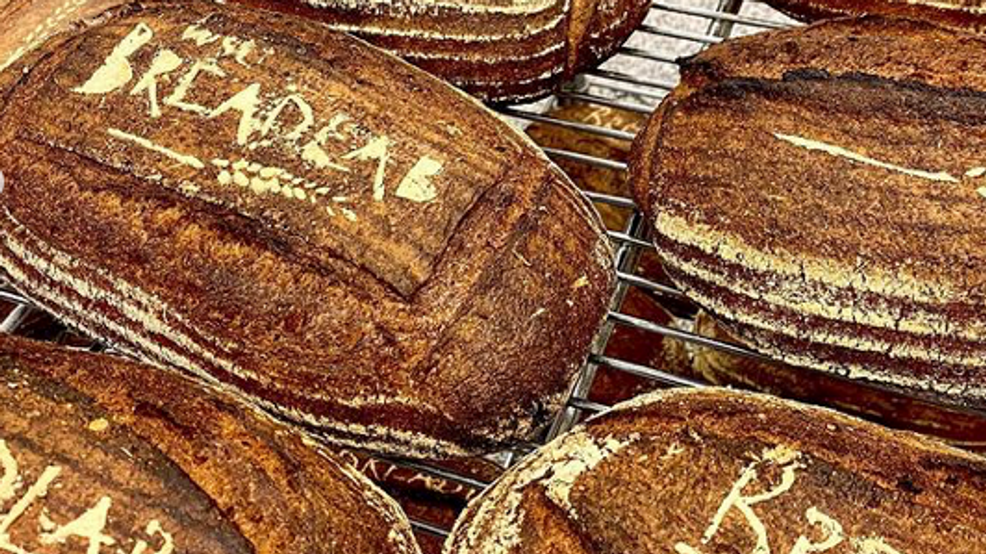 From the Field to the Loaves: Inside the WSU Breadlab

The Skagit Valley is one of Washington state's agricultural hubs. It is not, however, traditionally known for growing wheat.

"Here in this valley we grow 80 crops. Wheat is #80," said Janine Johnson, Special Projects Lead at the Washington State University Breadlab. "So, the Bread Lab resides in Skagit Valley because this is basically where one wouldn't grow wheat conventionally. Most of the wheat is grown on the other side of the mountains."

Located in Burlington, the Breadlab is not a bakery. It's a plant breeding program.

"We're plant breeders who bake. We breed grains for a climate in crisis and we breed grains for better food and farming systems. Then we have this lab where we can do test bakes. So, we take those varieties we grow out in the field and we figure out which ones taste good essentially," explained Kim Binczewski, Managing Director of the Breadlab.

"We breed wheat, barley, rye, buckwheat, dry beans," added Johnson. "And we work here at the Breadlab only with the whole grain."

Founded by Dr. Stephen Jones, the goal of the Breadlab is to make whole grains affordable and accessible to as many people as possible.

The Breadlab brings together scientists, farmers, millers and bakers, anyone who is connected with wheat or grains at some point in the food chain. In doing that, everyone can better understand each other's needs and work together to target them. Four PhD students are currently conducting research at the Breadlab, including Robin Morgan.

"I'm originally from Italy and I moved here specifically for the Breadlab in particular because the breadth of our focus includes anything from the field to the loaves. It's the only place I could find that has all those different aspects intermixed in such an organic way," said Morgan. "My focus is on developing a perennial grain crop...that doesn't die when it's harvest time. So, it's able to regrow and eventually give a different crop the following year...In that way we can reduce our farming impact on the soil to begin with."

That the Breadlab's wheat fields don't look uniform is by design. Unlike what one might consider a 'typical' wheat field where one or two types of wheat are grown at scale, these are home to a variety of diverse grains.

"Commodity wheat is what people think of when they think of a wheat field in Kansas or North Dakota or even in Eastern Washington," explained Binczewski. "It's a much more restrictive system, I would say. [At the Breadlab] we grow wheats that are blue and brown and every shade in between. That you would never find in a commodity system because it would simply get rejected.

According to Binczewski, by increasing the genetic variation of the fields crops can more easily adapt to the environment they're planted in. While breeding wheat to use the whole grain increases yield because it utilizes 100% of the wheat kernel while white flour uses just 70%. But, there are other, more tangible benefits as well."

"It starts with the farmer. If they're growing a unique variety of grain that takes them outside the commodity system it gives the farmer more control over what they're selling and the price they can get for it. So, that's a really big benefit...For consumers, they have a lot more choice," said Binczewski.

"One of the reasons I work here at the Breadlab is because of something called the Approachable Loaf," explained Johnson. "It's simply a sandwich style bread, but it's 100% whole wheat. The most important facet of it and, I think, where the future lies with regional grains is affordability. This bread is meant to be affordable and accessible. That's why we call it the Approachable Loaf."

The Approachable Loaf is perhaps the most tangible example of the Breadlab's mission in practice. The Breadlab started the Breadlab Collective, a group of bakers, millers, teachers and college programs across four different countries who teach, bake and sell the loaf. It contains no more than seven ingredients and must be priced under $6.

"I think what's important for me personally, and I think I can speak for the whole lab, is that people realize one, you can bake with 100% whole wheat. Two, it tastes really good. And three, it's accessible to everyone," said Johnson.

One of the ways the Breadlab does that is by inviting the public in, through the King Arthur Baking School.

Those conversations have, and continue, to happen at the highest levels of the culinary world.

"There are so many things that can be made out of grains that people don't recognize that we use in cooking every day," explained Samantha Beaird, Research & Development Sous Chef at Canlis.

At the Canlis Research Kitchen, the chefs from the Seattle fine dining institution have direct access to the Breadlab's research team. It's an exchange of information rarely found in the industry.

"We play a role in how trends happen, especially in fine dining," said Aisha Ibrahim, Executive Chef at Canlis. "Having the connection we'll have to a team who informs us in ways we can't inform ourselves, because this is what their life's work is about, allows us to use our life's work to connect the guest to a product and the source of that product in a really incredible way."

At the Breadlab, the scope of the work may be broad, but the team believes the impact could be immense.

How will they know if they've been successful? Well, when it all comes down to it, the answer is deliciously simple.