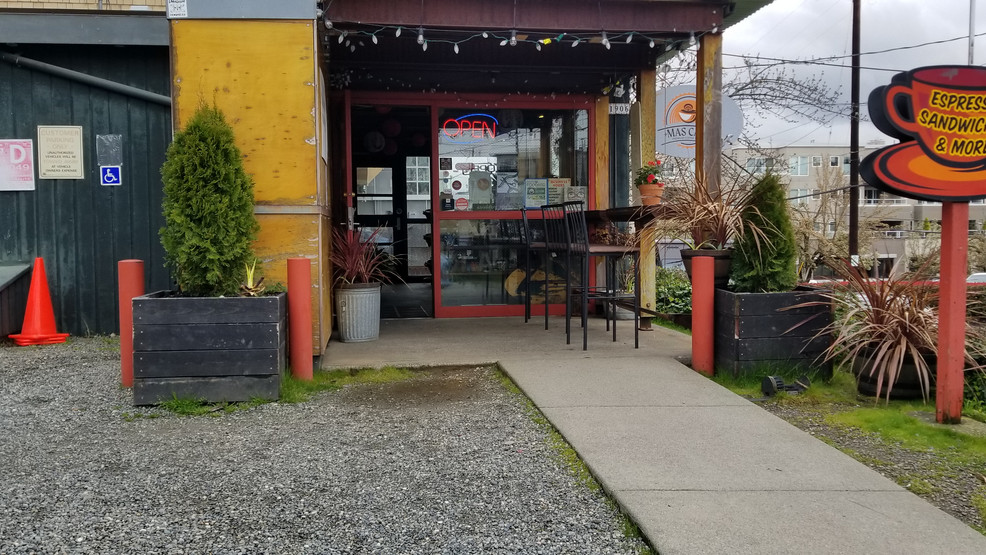 Blink and you might miss it, maybe you already have. Mas Café is a tiny coffee shop in Wallingford, just blocks from Gas Works Park. It is stuffed full of green plants in brightly colored planters, with the space available for customers equivalent to the size of a small bedroom. There are a few stools at a narrow counter, and some tables and chairs outside. It’s not packed with people, but on a Monday afternoon, the flow of customers was constant.

It reads like a long-established business. But Francisco and Gloria Mendoza opened it in August 2020, in the uncertainty of the pandemic.

"It was a crazy time – no one was going out, but people wanted take out and we did DoorDash and other delivery companies," says Francisco. It was a business idea hatched just as lockdown started.

The couple knew the owner of the building’s previous iteration – another café, but more focused on coffee roasting and a few small bites to eat.

"There’s really not much of a kitchen," he says. You can still see the roaster, although they don’t use it. "We always wanted to do our own thing, and we had this opportunity."

They both had worked in the restaurant and catering industry since their arrival in the United States in 2000. But Gloria was skeptical. They would have to invest all their savings. They didn’t know how the pandemic would turn out. Their three kids — ages 5, 11, and 15 — would likely be home for school in the fall.

"I had a lot of questions. I kept saying, ‘what if this happens,’ but he always had an answer," she says.

Even the kids had a vote, but they were all in. The older ones pitch in on vacations, happy to work for whatever ends up in the tip jar.

The area where the café is located — residential with a lot of boat-related businesses — helped it survive in the first uncertain months. They were considered essential services and remained open, while other restaurants didn't survive. Customers were hungry for a place to visit.

"They didn’t have anywhere to go for six months," says Francisco. "When we opened in August, they were really happy."

Now when the couple wakes up, they feel more excitement than worry. The café is closed on Sundays, so they have time to recharge. But there is no escaping the hard work that comes with owning a coffee shop. Everything served in the café is made from scratch, from their own recipes. They serve breakfast burritos, pastries, fresh-squeezed juices, and a small selection of pastries. They make a really good grilled cheese sandwich. The couple, both originally from Oaxaca, share the cooking and baking duties.

The menu is fairly static, but Gloria says that if customers asked for a change, they’d consider it. But they seem to really like the current menu, and she thinks they’d object if one thing was removed to make way for another. In the future, Francisco says he has a dream of adding omelets to the menu, if not at this café, then at another one. His five-year plan includes at least one more branch of Mas Café – maybe he’ll call it Mas Mas Café, or Mas Café Tambien, he says, laughing. He toys with the idea of having a sit-down restaurant, too. But he wants to keep this location up and running, regardless of new ventures, "It’s a good location."

"He is the dreamer," says Gloria. "He thinks big and when he sees a chance, he’ll take it. He is always confident. I want to be like that – not see the downside or the obstacles. I think about what if and he wants to do more, more, more."

Or in Spanish, Mas Mas Mas – perhaps the name of their third store.