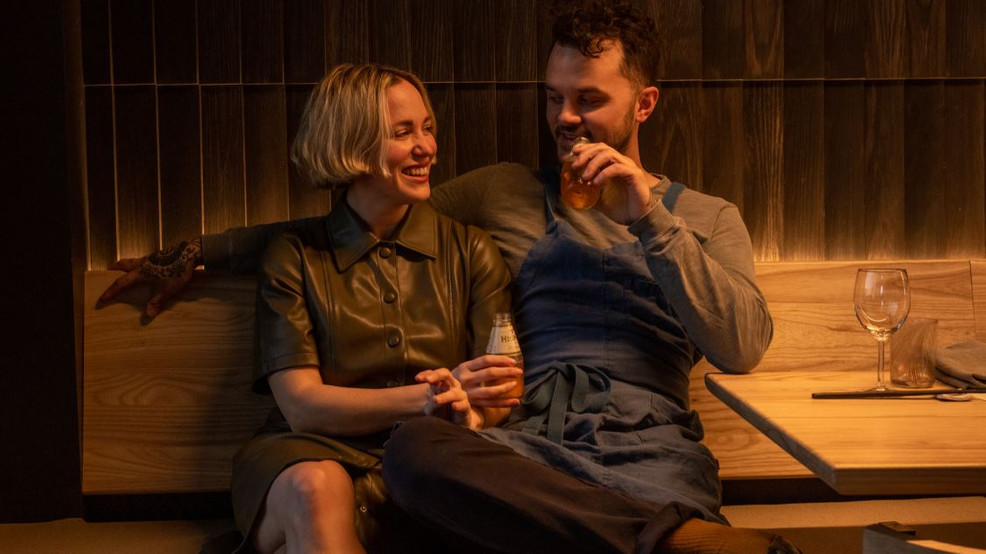 The love story behind celebrated restaurant Tomo in White Center

Jessica Powers never would have imagined that when she went to work with Mark and Brian Canlis at their eponymous fine-dining restaurant that she would end up co-running her own celebrated restaurant with her life partner just a few years later.

It all started when, from time-to-time while working at Canlis, Powers would run across their Executive Chef Brady Williams.

“When we did cross paths, we’d find ourselves laughing at the same things, which led to a friendship outside of work and eventually a romantic relationship,” Powers recalls fondly. “We started talking and have never stopped.”

One of the topics of conversation they kept revisiting was Williams’ long-standing desire to open his own restaurant, a plan that he had since the beginning of his career. Five years after they met, that plan came to fruition. This past September, Williams and Powers opened Tomo, a fine-dining restaurant with a casual vibe.

“Early on in Tomo’s conceptualization, the conversations Jessica and I had around the project surprised us, drummed up excitement for both of us, and made us realize that we could collaborate together on the restaurant in a meaningful way,” recalled Williams. “We had a lot of fun dreaming and scheming which made us want to continue on this path together rather than take different routes once we opened.”

With a background in the arts, Powers knows her way around the creative community. She introduced Williams to his business partner, designers, architect, and general contractor.

“I assumed ‘connection’ would be the end of my participation in the project, but as our daily conversations around it became more serious, we decided to formalize our collaboration,” said Powers. “Experiencing the wilds of restaurant life together on a daily basis is a total trip!”

Before Tomo and Canlis, Williams plied his craft at the beloved Roberta’s Pizza and the Michelin starred Blanca in Brooklyn. It was there that Williams got to work with Carlo Mirarchi. Like Mirarchi, Williams is also a self-taught cook.

“He took me under his wing,” said Williams. “It was there that I learned how to really think about food, about the quality of ingredients, about simplicity and balance in cooking."

It’s this craft and simplicity in both food and design that has made Tomo an instant hit with the community it serves and beyond.

“The atmosphere is truly stunning in its simplicity - which I would come to learn imitates the cuisine Tomo serves,” said Ravitch. “One dish was simply paper thin sliced summer squash in a brilliant olive oil marinade vibrating with basil. We left dinner feeling like we had just come from the home of a beloved friend. It was delightful."

Before opening the doors of their new venture, Williams and Powers thought long and hard about the neighborhood where they wanted to set up shop.

“I wanted to open my first restaurant in a neighborhood where Jessica and I spend our personal time, which narrowed the search to White Center, the ID, South Park, or the greater Rainier Beach area,” said Williams. “White Center is a neighborhood of independent businesses and specialists and I feel at home here."

“We are in White Center all the time learning and failing and improving and building relationships,” echoed Powers.

Their connection to community was evident before they even opened their doors. In July, a fire ripped through White Center's 16th Ave., destroying several buildings and businesses. Two days before they were set to open, Tomo’s kitchen team put aside the stressors of opening a restaurant and joined a block party where they sold foot-long Seattle Dogs under a pop-up tent to help raise money for the fire victims.

Powers sums up their philosophy perfectly, “In terms of how we move in the broader community, I would say that we share a desire for everyone to live with dignity and that informs our actions on a daily basis.”

“What Jessica said really resonates,” Williams reflected. “We are here almost every day. I don’t see that changing.”

“I think we can only become a ‘great’ food city if talented staff can afford to live, work, and make independent projects happen here,” said Powers. While some team members had worked with Williams previously and others are artist friends, Tomo also looked to hire applicants who lived in the neighborhood.

One opening hire, Dustin Nelson, had lived in the area a while when he found out that a “beautiful tasting menu restaurant was opening in the neighborhood.” A hip-hop beat maker and rapper, Nelson (aka Skatey P.) rattles off some of his favorite hangouts in White Center including Southgate Roller Rink, Roxbury Lanes, Good Day Donuts - and now, Tomo.

Nelson did his research on Tomo and loved their vision, so he decided to apply one day.

“They hired me instantly,” exclaimed Nelson.

When we were greeted at the door by Nelson, his smile and welcoming vibe was infectious and that spilled over to his service. For him, the underpinnings of that service starts with the staff family meal.

“I love that we have meetings where we get to meet with our wine purveyors to taste and learn about what we are pouring from the actual creators,” he shared.

Details matter to Powers and Williams. From the food, to the interior, right down to the cups and saucers.

“The buildout looks refined but it was very DIY,” said Williams. “The materials are humble and largely recycled. Many friends came together and offered their skills, hands, and time to help bring the interior together over a compressed time frame.”

One of those friends with skilled hands was ceramicist and former design director at Nordstrom, Kanae Okuyama.

Okuyama met Williams earlier when she was introduced by her friend Akiko Graham. Graham had created plates and serveware for Canlis, as well as Tomo.

“I would see Brady from time to time at gatherings at Akiko’s home," Okuyama recalled. “We were ‘friends of friends’ and then we became actual friends!”

Through this friendship, Okuyama was asked to create special pieces that focused on serving tea and coffee. She jumped at the chance, “I was so excited for the opportunity for my creations to be featured at Tomo alongside Akiko’s pieces!"

There’s no doubt that working in restaurants, let alone running one, can be taxing.

“In restaurants, you are on 24/7," related Powers. “After my Tomo workweek, I need sleep!”

But when she wakes, she’s thinking about food and what she might eat in Seattle that day, “I’m all over the map,” said Powers. “Right now, I’m thinking about pickled vegetables from Kamonegi, geoduck from Taylor Shellfish, Brady’s carbonara, Volunteer Park Cafe matzo ball soup and salt and pepper quail from Billiard Hoang...” The list goes on.

Williams enjoys cooking on his days off and has a predilection for long braises, pasta, hearty stews and other dishes you won't likely find on a Tomo menu.

For the dishes he prepares at Tomo, there tends to be a natural Japanese influence due to his heritage. A set five-course tasting menu with an optional wine pairing might include pork collar with tetsukabuto squash, dry aged beef tataki with miso broth and leeks, or weathervane scallops with potato, cabbage and geoduck.

Located inconspicuously among other businesses along 16th Ave., entering Tomo is a “real feast for the senses.” The space was designed by Seattle-based Graypants Studio. Warm, vertical ash slats line the wall opposite the bar as glowing lights bounce off the textured surfaces, setting the perfect mood in this intimate space.

Tomo is currently open four days a week, instead of seven. As Powers sees it, “time and quality of life are more valuable. I hope for constant revision more than growth.”

“We don’t want to play anyone else's game and are focused on being the best restaurant that we can be right now," said Williams. “To us, that’s creating a restaurant for our friends and others who enjoy what we offer. We hope it becomes a local favorite, a place you can’t wait to return to.”

And from our experience dining there, we have no doubt that it will.

Tomo is located at 9811 16th Ave SW in White Center. According to their website, "À la carte lunch is available Saturday from 11 am to 1 pm. Dinner is served Wednesday through Saturday from 5 pm to 9 pm."

Jenise Silva is a freelance writer for Seattle Refined.