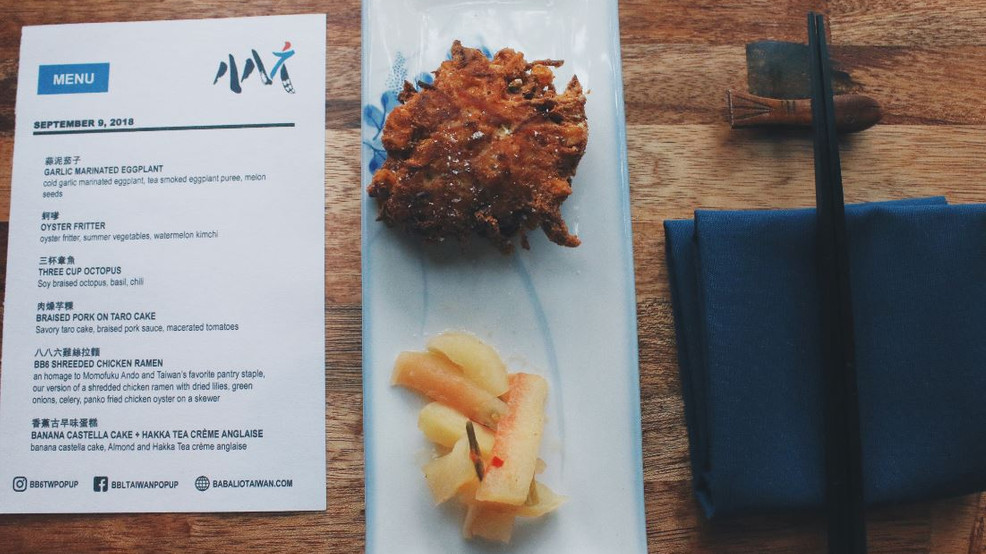 From law to journalism, to stagier, to professional cook.

It’s been a circuitous route, but along the way, Tiffany Ran has never stopped learning, sharing or teaching.

Although she's been cooking for more than a decade, Ran has recently focused all of those skills she’s honed over the years into creating some of the freshest and imaginative Taiwanese dishes for her pop-up, Ba Ba Lio.

“The best part of this job for me is the storytelling,” said Ran. “I love showing people new things, giving them new experiences, and sharing my experiences with them. Food is a great vehicle for exchange, and I love that part of doing pop-ups and cooking Taiwanese food.”

“I wanted to learn to cook, even just as a home cook," she said. "But a lot of cooking, not even to say professional cooking, did not seem like a possibility for me."

On top of that, Ran grew up in a reserved Asian community that embraced a straightforward life: higher education, grad school, and a white-collar existence. There were no discussions of what other options might even be available.

After a brief stint exploring law as a profession, Ran went into journalism, where she hoped to share her love of food and restaurants through her writing. But she was the first to admit that she had zero knowledge of the industry or restaurants in general.

So after noticing a small restaurant opening up on Bainbridge Island, Ran approached the chef and asked if she could stop by and observe. Her ‘fly-on-the-wall” status was quickly tested during a busy service when one of the cooks yelled at her to grab more oregano. Ran didn’t miss a beat as she ran to the walk-in to grab the herb.

“That was my first task. I picked oregano on a busy night to replenish the mise-en-place," she said. "I essentially jumped from being a reporter to a stagier without even knowing at the time what that word meant.”

That restaurant was Hitchcock.

“Chef Brendan [McGill] gave me my start at Hitchcock. I was incredibly lucky," said Ran. "I walked into the right restaurant and got the education of a lifetime.”

But the idea for Ba Ba Lio (which is 8-8-6 in Chinese, the international calling code to Taiwan) really started to germinate earlier when Ran first moved to Seattle. She felt a pull to recreate the dishes her mother would describe to her over late-night calls to Taipei.

“When I moved to Seattle over ten years ago, I was incredibly homesick," she said. "My mother would have returned from the morning market, and she would tell me about all the fruits in season, the deals she scored, and what she planned on making for dinner.”

Those conversations taught Ran a lot about dishes she thought she had forgotten over the years. So Ran started to recreate a lot of them in her own kitchen, because she couldn't find them in any of the restaurants here.

“I had the idea for this pop-up for many years, before the term pop-up was popular, but it ultimately came down to confidence," she said. "I held onto these dishes and ideas like a secret. It took years to really trust in my skills, trust the community even, that they wanted what I had to offer.”

Ran’s first pop-up was in August 2018 at Wann Yen, a Thai restaurant in the University District. It was a 6-course menu coming out of very small kitchen, and that night she served less than 15 people.

But as Ran started to learn more about these and other dishes, she saw how migration has continued to shape Taiwanese cuisine over the course of its history, and nothing is as it seems. Ran has since begun to infuse Pacific Northwest influences into the dishes to reflect her own migration.

“When we're outside of that country looking in, it's easy to assume that the cuisine is stagnant, but even today, the dishes at the night markets are ever-changing, a reflection of the ex-pats, trade, and other influences that are growing in Taiwan.”

Chef Wil Yee, who has assisted Ran in the kitchen for the Ba Ba Lio pop-ups, sums up the results of this infused journey.

“I mean, who serves flame-kissed bottarga skewered with Washington apples? Simply exquisite,” exclaimed Chef Wil. “Her knowledge on her cuisine is unrivaled, and her mission to educate through her pop-ups is beautiful.”

Since the early days of serving a dozen diners at her initial pop-up, Ba Ba Lio has caught the attention of fans across the city craving heart-felt food and shared experiences.

“At the end of the day, it’s about prioritizing that opportunity for exchange and storytelling above other aspects of foodservice,” notes Ran

Ba Ba Lio pops up at Fair Isle Brewing in addition to other locations every other Wednesday. You can catch up with them on Instagram at @bb6twpopup.