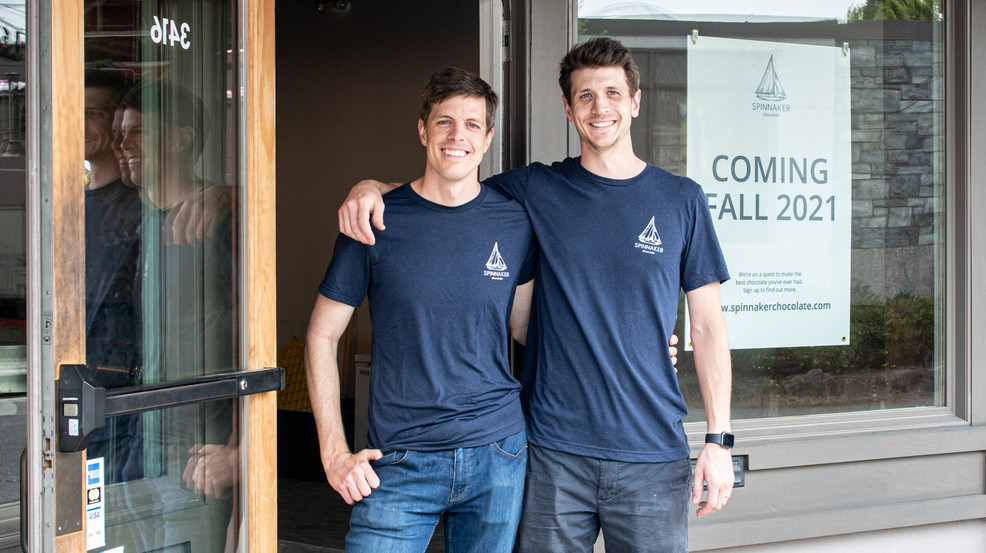 Few things have the near-universal appeal of chocolate.

"Everyone has their own relationship with chocolate. For example, my wife likes to sneak into the pantry and eat a little piece of chocolate. Other people like to sit down and share a bar," said Kelly Van Arsdale.

Van Arsdale would know. He co-founded Spinnaker Chocolate with a production facility and retail space in Seattle's Roosevelt neighborhood.

"We are a bean-to-bar chocolate maker, which just means we start with cocoa beans and process them all the way through to finished chocolate bars," explained Van Arsdale. "The main differentiator is we don't roast the whole beans. We just roast the nibs, which are the insides of the beans. That's something that gives us a lot more flavor and a lot more consistency from roast to roast and batch to batch."

Van Arsdale left behind a successful career in the tech industry to launch Spinnaker with his brother, Chris, who he described as the real chocoholic of the family.

"My brother started making chocolate as a hobby probably six or seven years ago and then he roped me into it," explained Van Arsdale with a smile. "We made a lot of chocolate for a long time, but started to get better and better and we noticed a lot of tweaks. We were very scientific about our process. So, we did a lot of tests, a lot of experimentation. We obviously spent years doing it until we got to what we have now, which we think is a pretty fun process."

Visitors to Spinnaker Chocolate can literally see the chocolate-making process firsthand. The retail area of the space has an open view to the production area.

"This is our shaker table. The basic concept is it helps us do a broad initial sort of the chocolate," said Van Arsdale as he gave me a tour of the space. "By the way, if it looks funny it's because we built it ourselves."

Some of Spinnaker's equipment may be homemade, but their approach to chocolate is both time-consuming and technical. It's designed to highlight the distinct flavor of each different variety of single-origin cacao they use.

"It's very much a cross between a wine-making approach and a coffee-making approach. Chocolate sits in this interesting middle ground between those two worlds," explained Van Arsdale.

"We're taking cacao from a bigger form down to a really small form. So we're basically taking then big whole beans, we're cracking them, taking the shells off. We have the nibs inside. We're roasting the nibs and then we grind the nibs up (to really small granules). A nice smooth, creamy chocolate is what we're shooting for."

Grinding the beans alone takes 48 hours. Then, the chocolate sits in massive blocks until it's ready to be tempered and made into bars.

"We have this big vat of melted, spinning chocolate. What we do from here is take one of our molds, then we can catch the chocolate on the mold and put it on the vibration table. That fills the mold, gets into all the cracks. Then, we put it in the fridge and it'll harden up into a chocolate bar."

Some of Spinnaker's bars are full chocolate. Others get additions like cacao nibs, sea salt or puffed quinoa.

"By far and way, most popular is our bourbon bar. People love the bourbon bar. My favorite is the Madagascar with sea salt and then if you like milk chocolate we have our dark milk bar," said Van Arsdale of the three bars he recommends to new customers.

The result? Each chocolate Spinnaker makes boasts a distinct flavor, though all are delicious, whether you enjoy a bar amongst friends or pop into the pantry to grab a little bite.

"It's super gratifying to give somebody a chocolate bar and see them taste it and enjoy it and love it. That's so cool to see that process."