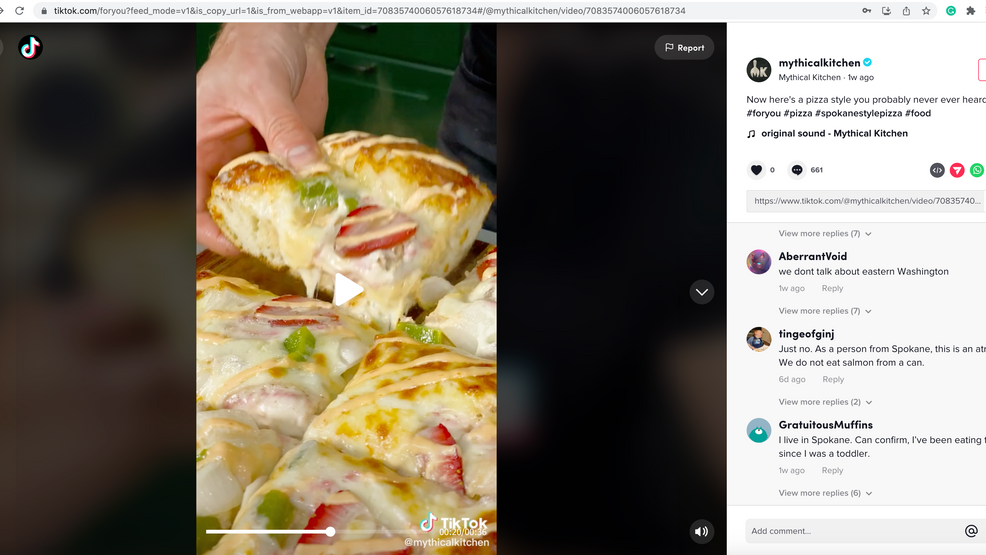 SPOKANE, Wash. (TND) — Some felt pineapples and ham seemed like an unpopular choice for pizza toppings. But one TikToker is taking it to the next level, leaving locals in one Washington state city confused.

Mythical Chef for Good Mythical Morning, John Sherer, has been known to push the envelope when it comes to wacky food trends on TikTok.

GMM is an American comedy, talk and variety show that originally started as a YouTube series by well-known social media talents Rhett McLaughlin and Link Neal.

Sherer regularly cooks for the show, but he took to TikTok last week to share a new recipe called "Spokane-style pizza."

He starts off the recipe with a casserole dish and throws a pie crust on top. He squirts on "fry sauce" — which he refers to as a "local [Spokane] delicacy" — and adds canned salmon, bell peppers and onions.

Sherer tops off the creation with mozzarella cheese and sliced strawberries. He tells viewers to cook the pizza "Detroit style" to get the crispy crust.

Sherer pours more "fry sauce" across the pizza and cuts the pizza up into rectangles. He tastes the food and comments on the unique blending of Washington salmon, creamy "fry sauce" and a little hint of sweetness and acid from the strawberries.

However, many commenters are disagreeing that this is an actual recipe. TikTok user @owendodd2176 commented "as a citizen of Spokane, this is not a thing."

Other Spokane locals jumped in as well. TikTok user @tingeofginj commented "just no. As a person from Spokane, this is an atrocity. We do not eat salmon from a can."

TikTok user @gratituousmuffins had a differing opinion, writing "I live in Spokane. Can confirm, I’ve been eating this since I was a toddler."

Another TikToker @daveistrying agreed with the recipe having Spokane origins, writing "Hello I am Spokane, WA formerly Spokane Falls, WA and I eat this pizza every Father's Day which we invented thank you."

The trend continues to grow on Twitter, with over 2,500 likes.

Would you try this new pizza trend? Vote in the poll below or by clicking here.