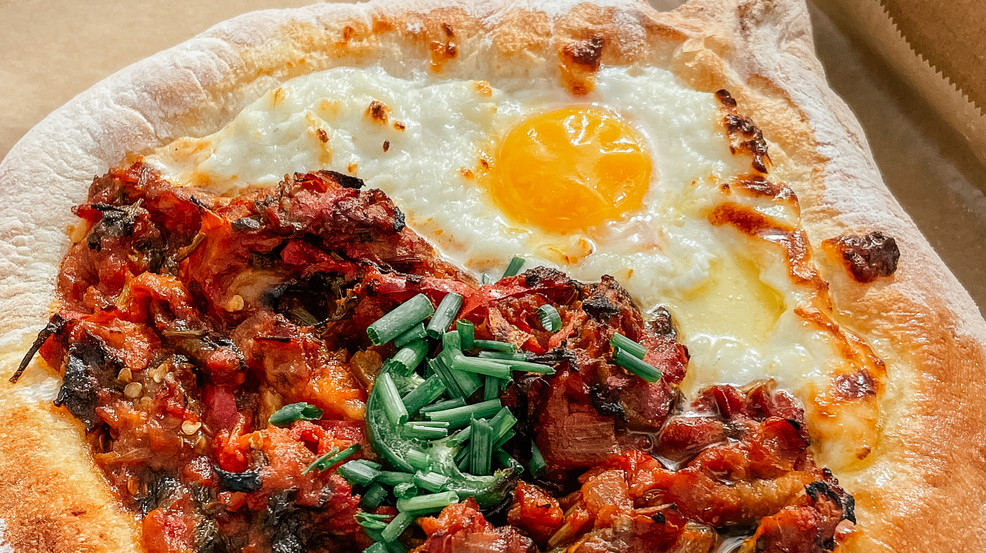 Back in the 1990s, there was a fancy Georgian restaurant on Queen Anne called Pirosmani. It was this writer’s first exposure to food from the southern part of the former USSR and it was love at first bite. There has been a vacancy for Georgian food since it closed, but now you can indulge in Georgian comfort food at Skalka, owned by Mariia Tarasova and her husband, Sergey Zdorovetskiy.

The cafe — its name is Russian for rolling pin — offers five iterations of a single food: Khachapuri, a bread boat traditionally filled with farm-fresh cheese and butter, then baked and topped with an egg yolk as it leaves the oven. Other flavors include a riff on stroganoff, one with vegetable staples of the southern European diet like eggplant, a chicken option, and one with red beans and bacon.

Originally from Russia, Tarasova and her husband moved to Seattle in 2014. While he worked at Amazon and she cared for their two small children, they hatched a plan to open a pastry shop. They baked in the evening, and she ran the shop during the day. It expanded to include simple breakfast sandwiches and the ever-present avocado toast, along with croissants and other patisserie staples.

In 2019, a Georgian woman came to the couple asking for a job. She wanted to make khachapuri and a traditional Georgian dumpling called khinkali for the lunch crowd. They added other Georgian dishes and planned to launch a Georgian dinner service, as well.

Then came the pandemic.

So the restaurant shifted to deliveries. "I worked the entire night at the restaurant to make sure we had enough honey cakes for our customers," Tarasova says. "Every day I packed our minivan with bags full of Georgian traditional food and was delivering these with my two kids in the back seat. One day I was so exhausted, that when I dropped off the last, I started to cry. It was so hard for me to change everything in the restaurant, make deliveries by myself, going from Auburn to Everett, when just a month before we were so happy with the new concept, and got so many loyal customers."

By 2021, they determined more change was necessary. "We decided to cut our menu," says Tarasova. "It was a very hard decision at first. But now I understand it was the best decision that we’ve ever made in our restaurant. If you focus on one product, you can make it to perfection."

And customers noticed. On a recent Saturday morning, there was a line out the door while every table in the light, airy space was full.

"Our khachapuri are simply unique. It reminds people of that home-cooked food from your grandma."

It’s more than flavor, Tarasova says. It's an experience. "When you open the door to our restaurant, you can smell fresh bread. It immediately makes you feel that comfort of home. Once you’ve got your khachapuri, you have that excitement like you’re opening a gift as a child. You need to rip off a chunk on the crust and scoop the filling. Oh, and don’t forget about the egg yolk — our guests love to pop the yolk! When you eat khachapuri, you forget about stress, bad thoughts, and gloomy weather. First, you focus on how to eat that bread boat, and then how to stop — because our khachapuri is very addictive."

Tarasova hopes they can open more locations, still focusing only on the khachapuri. Cities like Portland, San Francisco, and Spokane are on the radar.

"We are also dreaming about a fancy Georgian restaurant with all traditional dishes, but this is just a dream for now." One that customers can hope comes true.