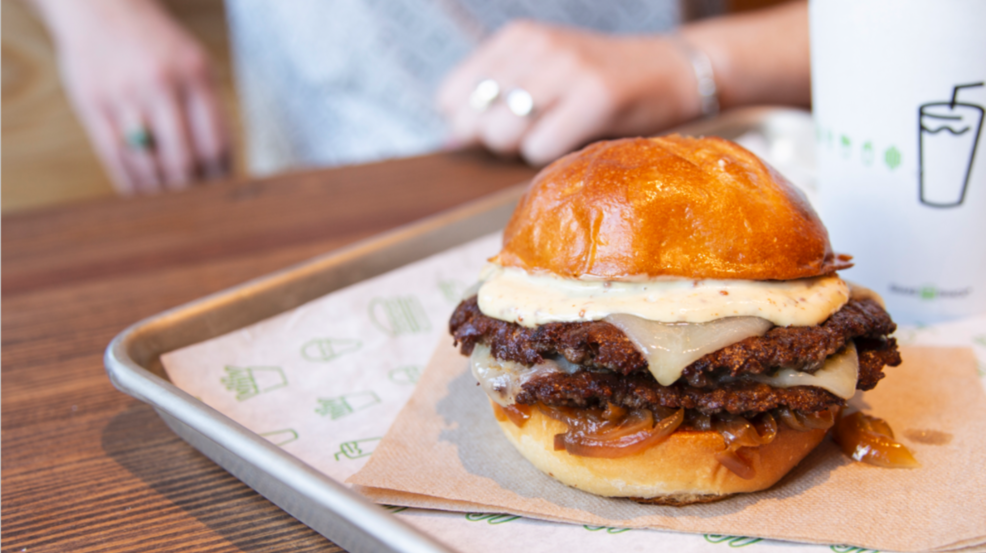 The Montlake Double Cut; a Seattle burger exclusive made of local ingredients like a bun from Macrina Bakery, cheese from Beecher's, and beef from Crowd Cow. (Image: Shake Shack)
SEE MORE

After announcing they would open their first Seattle burger joint in August of 2017, the wait is finally over; Shake Shack opens Saturday, October 6th. Yup, our patience has been rewarded and they'll open their doors to an awaiting public at 11 a.m.

We've waited breathlessly for this Shake Shack in South Lake Union to open. It'll be their first location in Seattle and it couldn't come soon enough. While Shake Shack's march to world domination has been steady, opening in the Pacific Northwest has been a slow go. Sure, there was the popup party at Canlis earlier this summer, but that was a teaser. Wait no more as they'll be slinging their burgers, crinkle cut fries, shakes, and more in a few short days.

Now about those burgers.

Shake Shack calls themselves a 'modern roadside burger stand' and their burgers are my platonic ideal of a burger. Smashed beef patty plus American cheese and a squishy bun equals burger bliss. But what's cool about this Seattle Shake Shack is their special Seattle-exclusive burger, the Montlake Double Cut. Loaded with local ingredients like a Macrina Bakery bun and Beecher's 'Just Jack' cheese, the beef is supplied by Seattle's own Crowd Cow with beef from local ranchers, Gebbers Cattle and Hutterian Farm. The Montlake Double Cut will be available in limited quantities daily.

Opening in the burgeoning South Lake Union neighborhood, this Shake Shack features local art from Jesse Brown, reclaimed bowling alley lanes for counter tops, and other sustainable touches throughout their space. And when our weather warrants it, their outdoor patio beckons. During this soft opening period by Shake Shack, they're making a donation to Youth Care, so you can get your burger on and know you're putting good vibes back into the *universe.*

There you have it, burger fans. Shake Shack is finally here. And for those that like camping, the first 100 in line get a free custom Seattle Shake Shack t-shirt. Get yourself down to Westlake Avenue to get your burger fix, and while you've been patient with waiting for them to open, be prepared to be patient once again as there will be lines. Hey, maybe try downloading and using their app to get a jump on the line.

See you at the Shack.

And p.s. - another thing cool about the Shake Shack menu; it's gluten-free friendly! That's right, they have gluten-free buns available.