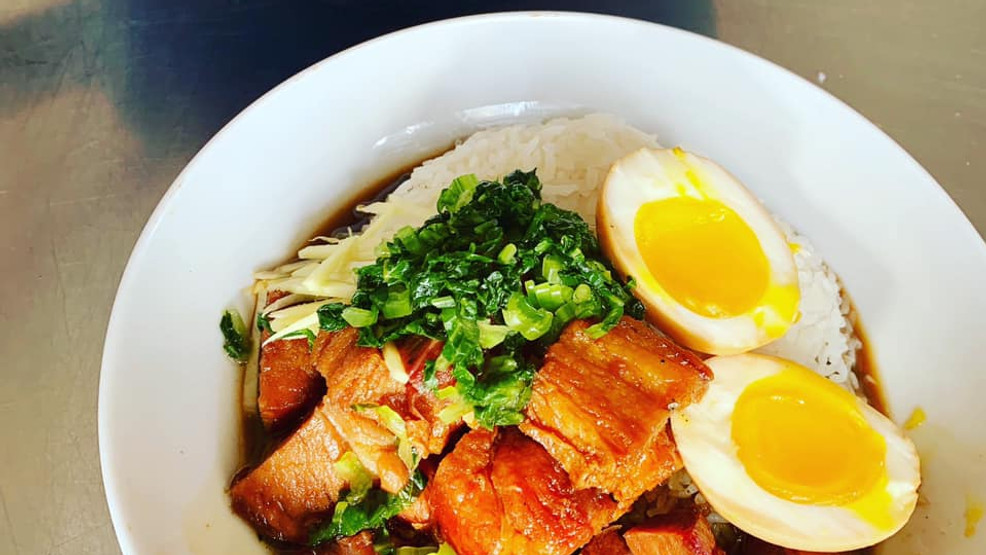 In a kitchen some 7,007 miles away from Seattle, someone is adding fresh mint, basil, or cilantro to the perfect family feast of Laotian dishes, all served with the cuisine’s signature sticky rice. Traveling over 7,000 miles for the best feast of your life takes some serious effort, but it’s absolutely worth it.

However, if you’re short on time and would rather not cross the Pacific Ocean, all you need to do is catch up with the Tuk Tuk Mobile Feast as it serves up incredible Lao food to Seattle.

Siri Martinet and Jacob Devaul are the team behind Seattle’s only Lao food truck. The two met while working together in the Seattle restaurant scene and eventually decided to branch off and start their own food truck.

Tuk Tuk Mobile Feast highlights Martinet’s heritage by focusing on recipes she grew up making with her family in Laos and then in Hawaii when they came to the U.S. as refugees in 1979.

“I had been thinking on this idea for a long time - to get a food truck going because there just isn’t enough Lao food in the Seattle area,” Martinet said. “I just want to bring that forward.”

Using local ingredients whenever possible, Martinet and Devaul aim to bring new flavors to Seattleites’ palates through Lao dishes, which utilize flavors that might not be typical in our everyday cuisine.

Martinet said she’d steer anyone new to Lao food to Laab Gai on Tuk Tuk’s menu. The word “laab” means luck, so the dish is typically eaten during auspicious holidays. Minced chicken gets tossed with lime, fish sauce, chilis, fresh herbs, galangal, and crispy toasted rice powder and is served atop jasmine rice. “It’s like a party in your mouth,” Martinet said. “It’s so full of flavor that it takes me back home.”

Tuk Tuk Mobile Feast’s menu has some menu items always served on the truck like the laab gai, Lao-style chicken wings with a sweet-spicy glaze, and Pad Gra Pao - chicken stir-fried with holy basil, garlic, chili, with a fried egg on top. While some menu items may seem simple, they’re as far from it as Seattle is far from Laos.

“It doesn’t look difficult to make, but it’s very time-consuming,” Martinet said. The complex elements of each dish are part of the reason Martinet often cooked with her entire family. Many hands make for light work.

“When everybody comes over is when you all lend a hand,” Martinet said. “It’s a communal thing when everyone comes together, and we cook.”

But as the seasons change, so do the special menu items at the Tuk Tuk Mobile Feast. Count yourself lucky if you can grab a plate of Nam Tok, also called the Beef Waterfall Salad. A refreshingly cold dish of marinated and grilled flank steak seasoned with a lime fish sauce dressing, lemongrass, chili, mint, coriander, fried shallots, and toasted rice powder.

Martinet goes back to Laos every few years to get new inspiration for the Tuk Tuk menu and visit family. “It’s almost like going back to learn new things and brush up on some things that I may have forgotten,” she said. “I just get immersed in the culture all over again.”

Those who are spicy-food adverse have no fear at Tuk Tuk. Martinet and Devaul aren’t into scorching customer’s taste buds. They make Lao dishes with the amount of spice they would like which perfectly compliments the other herbs.

“That’s one thing we don’t compromise on,” Martinet said. “We make it the way it’s supposed to be eaten and enjoyed. We don’t make it mind-blowingly hot. We just want it to be well-rounded.”

We couldn't be happier that Martinet brought her Lao cuisine expertise to us here in Seattle. Until we find the time to hop on a flight across the ocean, we’ll be hanging out at Tuk Tuk Mobile Feast.