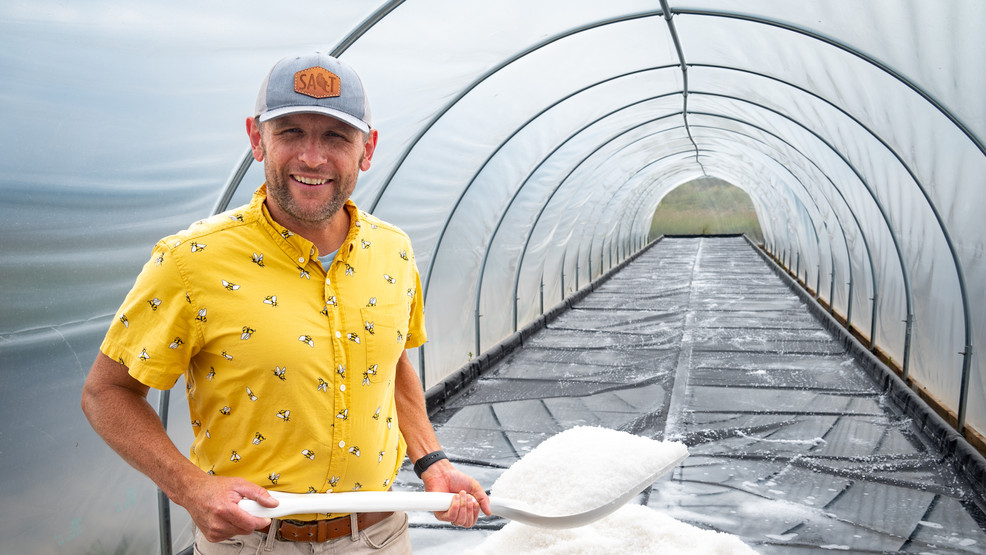 From the waters of the Salish Sea, straight to your table... think local with your seasoning. The founders of San Juan Island Sea Salt hope you'll sprinkle it on everything; salt, that is!

"We use only sunshine and seawater to make our salt, no fans, no heaters, no boiling," says Brady Ryan, founder and owner of San Juan Island Sea Salt. Their salt captures a wild and briny flavor due to this process. It stems from leaving in all the minerals the sea offers, or, as Ryan calls it, "the whole mineral spectrum." But this mineral-rich salt is only the beginning for San Juan Island Sea Salt, offering over 30 varieties of seasonings and salted caramels.

What began as homemade sea salt for Christmas gifts crystalized into an idea for Ryan.

It was 2012 and Ryan had been working on a large vegetable farm outside of Seattle. One of the skills he acquired on this job was building a greenhouse. Thinking back to the salt-making venture in his kitchen, he began to wonder if he could make salt in a better way, using structures like garden greenhouses. After a little research, he discovered it could be done! With encouragement from Leah Wymer (his then-girlfriend/now-wife), they decided to go for it. (Leah simultaneously owns Bloom San Juan, as well as helps out with the salt-making.)

Success came later that summer as they built their first evaporation house. Ryan explains it as, "Basically a greenhouse with an inside ocean."

Following the construction of their evaporation house came their first batch of sea salt. But the real test came when they took some jars to a farmers market and, to their surprise, the salt sold out. It was a hit!

Currently, they have 14 evaporation houses on their farm, producing 20,000 pounds of salt a year. And yes, they still sell out each year.

The Process of Making Salt

During the months of May through late September, the folks at San Juan Sea Salt can be found on the south end of the island gathering seawater from private beach access, loaned to them for this specific purpose.

Collected into ‘Fred’ the tanker truck, the seawater is then transported from the shores of San Juan Island back to the farm to be filtered and pumped into the evaporation houses.

They solar evaporate their seawater, as opposed to boiling it, as many other producers are inclined to do. By letting the natural process take place, they keep much of the mineral content in the salt, heightening that wild and briny flavor.

Each evaporation holds a seawater pond, which gets filled once a month or so during the summertime. It can get pretty hot and steamy inside these hoop tents!

A couple of weeks into the evaporation process, the real magic begins. Crystals begin to proliferate on the surface of the water. By the time the whole pond has evaporated, there is a thick layer of salt left in its place.

This raw form of salt comes in differing shapes and sizes, so the next step toward a finished product is to dry it, sift, grind, and sort it. The result is the flake salt, finishing salt, and grinder salt used in cooking products, and medium coarse salt used in their bath salts.

A final step in the creation process for the salt happens in the Spice Kitchen. Here, the salt marries with over 100 different organic herbs and spices, making the various seasonings San Juan Sea Salt offers.

And this is just the beginning for Tyler Ryan (big brother to Brady), as the "Master of Flavors" is constantly hard at work coming up with new recipes and combinations of tastes. His current favorite is the Madrone Smoked Pepper, a newer edition to the line-up. He qualifies it as "enchantingly rich yet, does not overpower the other flavors in a dish."

And what does San Juan Island Sea Salt do in the winter months? They process, jar, and label, of course! And they have a blast doing it. Sometimes, right in their living room.

It is a family affair with Brady, Leah and their two kids, plus Tyler, family members and friends all joining the work parties to bring you the highest quality sea salt possible, with maybe a little terroir of the San Juan archipelago. Bring back a jar from your next visit or, (if the cook in you can’t wait to try out all the fabulous flavors), check out their website for cooking inspirations and recipes. They are happy to ship their salt directly to you or help you find a retailer in your neighborhood.

MaryRose Denton is a freelance writer for Seattle Refined. While the products, services and/or accommodations in this story were provided without charge, the opinions within are those of the author and the Seattle refined editorial board.