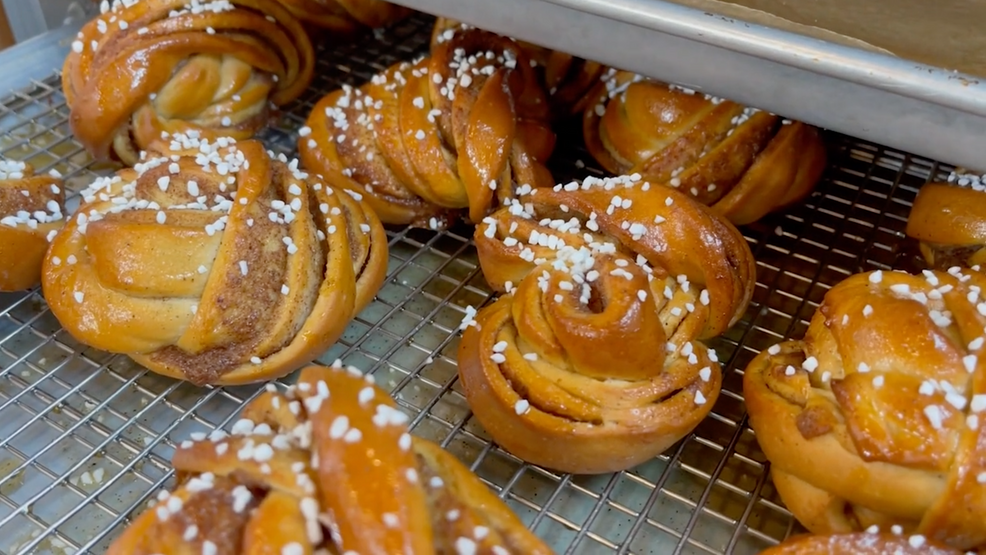 Saint Bread, a bustling bakery & café on site of a former 100-year-old boatyard

At Saint Bread, there is a belief that the act of feeding people is sacred.

"Saint Bread, it comes from two words, 'sandt brod,' which means true bread or bread made by hand. It's a Danish phrase," said Yasuaki Saito, co-owner of Saint Bread.

While the team here certainly feels their work is important, they don't take things too seriously.

Located on the Portage Bay waterfront near the University of Washington, Saint Bread sits on what was the site of a hundred-year-old boatyard. Now, it's a bustling all-day bakery and café.

The son of a German-Alsatian mother and northern Japanese father, Saito has worked in restaurants for more than 20 years. His partners in the project are something of a dream team, each with a distinct culinary perspective. Bread baker Michael Sanders grew up in the southeast United States, while pastry chef Randi Rachlow is an expert in Scandinavian pastry from Rhode Island.

"We wanted this to be nostalgic or sort of draw on all of our experiences," said Saito. "There is a lot of us bringing our history and heritage and have fun with that. So, you'll see things on the menu that maybe have a leg or foot in one of those worlds."

"Sometimes I think we miss the similarities between cultures and culinary traditions and those types of things. So, for me, when someone says, 'oh, I don't know what a kardemummabullar is,' well, it's just basically a cinnamon roll. It's got yeasted dough. It's got crispy edges. It's really delicious and rich on the inside. There are things you can have that will remind you of something but can also be entirely new or something you've never had before."

The menu is also designed with approachability in mind. That means you'll find Saint Bread spins on classic dishes like the breakfast sandwich and smash burger alongside an ever-changing array of freshly baked treats.

"We bake all of our own pastries and bread in house, of course, with a name like Saint Bread. So, we have pastries that we bake fresh every morning, everything from laminated pastries in the French tradition to Scandinavian things. We have things that are a little bit more Japanese leaning. We have sandwiches that are really simply prepared," said Saito. "And then, I guess, the whole thing is more about the experience. So, coming to the site and being here on the waterfront. Being in a place that we feel is open and comforting and hopefully welcoming."

Yes, while food may be at the forefront, serving people, caring for the community is central at Saint Bread. It is a focus on hospitality that matters deeply to everyone here.

"I think some people's heart is in it, and mine is entirely in it. I love caring for people. It really means a lot for me to be able to do that," said Saito. "Then also the people involved in [Saint Bread]. We have all grown up in this industry. We all have some portion of that in us to say we want to feed. We want to give. We want to create a space for the community to feel welcome."