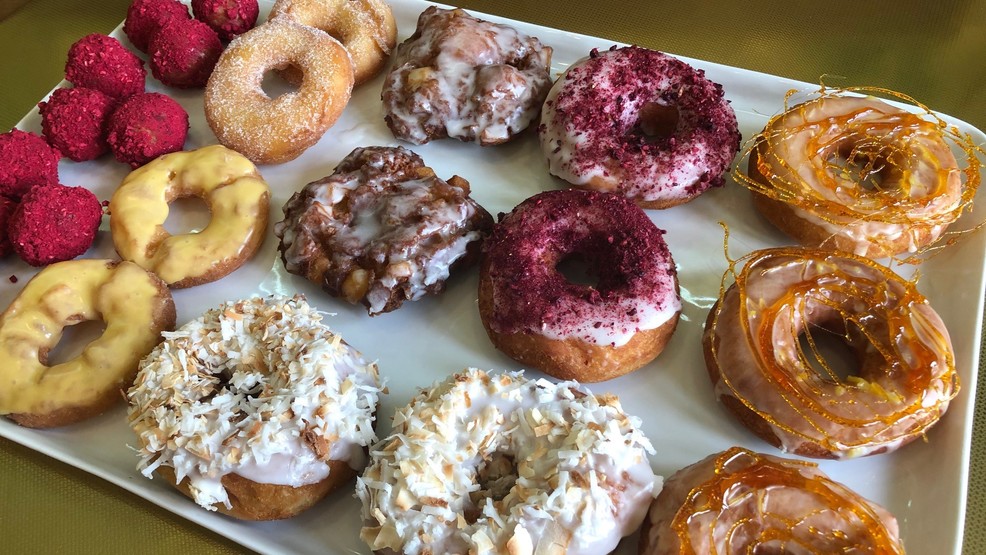 You could call her a cruller connoisseur and doyenne of dough. Sure, they have flavors you know and love...

"I always wanted to have a classic doughnut shop, so we have our Maple Bar, Plain Glazed, Apple Fritter, Chocolate Bar," said Kim. "And Raspberry Holes which are unique to us."

But they also have surprising seasonal-inspired offerings.

"The fun ones are the Mango Mochi, the Blackberry Chevre, Toasted Coconut and then Burnt Sugar and Orange," she explained.

Kim and her business partner Seattle restaurant owner and entrepreneur I-Miun Liu open Raised Doughnuts last June. But she got her first taste of the food biz as a kid, when her parents owned a little café in Sumner, WA.

They'd take her to work with them in the wee hours of the morning and always make a stop for doughnuts along the way.

"It's just like - the nostalgic memory," said Kim. "I love doughnuts."

She went to culinary school and spent ten years at Macrina Bakery. And then, one day, she was in California visiting some friends.

"I was like man, if I did a doughnut shop I think I'd call it Raised."

After doing some pop-ups, that's exactly what she did! Kim gave us the 411 on cooking up the perfect doughnut. She starts by mixing the dough, and within an hour it doubles in size. She rolls the dough a bit and then uses a cutter to create the doughnut shapes and holes. Remember - they're really known for their Raspberry Holes.

After cutting the doughnut shapes out, it's time to fry 'em up in oil. She lets one side get that golden brown color and the flips them over. Then they go on a tray.

Then the fun part - decorating! She makes glazes from scratch, dips the doughnuts and then adds her delectable toppings. Finally the most exciting part (for me at least) - a taste test!

"My favorite thing to do is watch people eat these {raspberry doughnut holes} because the first time they have it, they'll put it in their mouth and their eyes just pop," said Kim. "I think that's why it gives the wow factor."

Verdict: They are tart and sweet and off-the-charts delicious.

Verdict: Pure delight - like eating air with sugar on it.

Mi Kim and Raised Doughnuts - a combination that's a delicious recipe for success.

Raised Doughnuts is located in Seattle's Central District. They are open weekdays from 7 a.m. - 2 p.m. and weekends from 9 a.m. - 3 p.m. or until sold out.