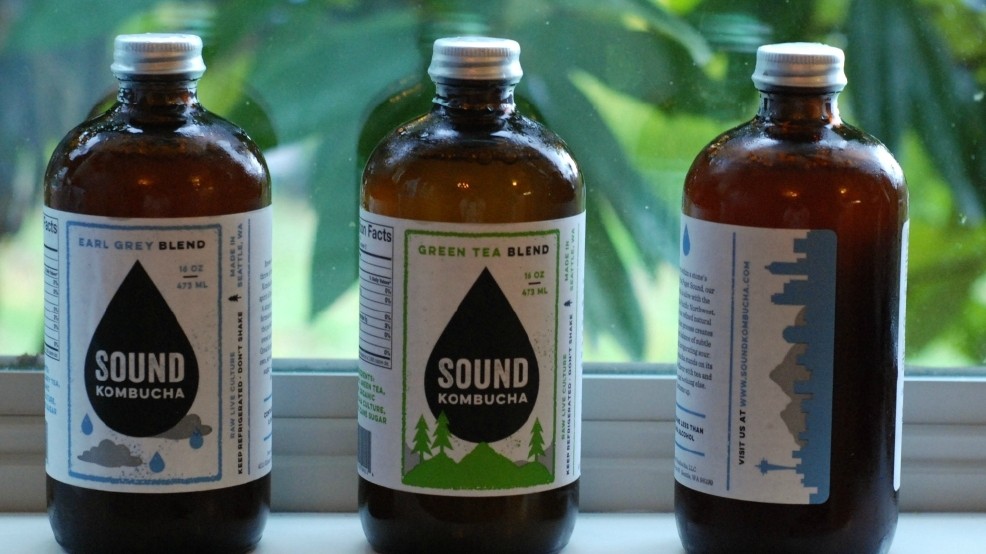 In an unassuming location in Magnolia, gallons of handcrafted brew are being fermented with a promise of health and the delight of unique flavor. Unlike beer which requires hops or distilled sprits which also use a fermented process, this brew requires a gelatinous mass called a SCOBY or a symbiotic culture of bacteria and yeast to work its magic. The brewing process takes about a week and during that time, the SCOBY transforms into a fermented tea called kombucha. For the past year, Daily Garnish blogger, Emily Malone and her husband, Casey Malone have been brewing their own craft drink under the brand name, The Puget Sound Kombucha Company.


The Puget Sound Kombucha Company began five years ago in the Malone's kitchen. They started brewing at home with a one gallon jug and recently decided to take the plunge to start their own kombucha company. "We love Seattle and wanted to contribute something new to Seattle. We saw an opportunity to make a unique kombucha," said Casey.


If you'd never had kombucha, it is a sweet-tart cider vinegar drink that is carbonated like beer but made of tea, sugar and a scoby. The scoby is a crucial part of the brewing process as it eats the sugar, tannic acids and caffeine in the tea and creates live microorganisms which many believe have beneficial properties.


A few weeks ago, Casey took time to show Seattle Refined around the brewing operation and shared how he was introduced to the drink. "The first time I tried kombucha was in Indiana at my parent's house," said Casey. "My Mom is really into fermented food and while hers was a bit sour for my taste, something about it just really intrigued me."


With that first taste, Casey was hooked and began making batches of kombucha at home. He spent time learning about how kombucha was made and began exploring different flavors for the Malone's home brew. He also looked to other Pacific Northwest kombucha brewers for motivation.


"Communitea was an inspiration to us as home brewers when we first started. We went in many different directions after experimenting with other tea flavors and different sweet, sour, and carbonation levels," said Casey. "Emily always shared her honest opinions on the experimental batches which helped a lot."


Even after all the experimenting and research, the Malones were happy to just make good kombucha to enjoy at home. "We went through hundreds of batches at home without ever considering starting this business." said Casey. "We just felt a strong desire to make it better every time. One day we realized how much we loved doing this, and wanted to try doing what we loved for a living."


The couple started researching business locations and learning about regulations for commercial kombucha brewing. The Malones also looked south to see what kind of kombucha was being brewed in the Portland region. "Oregon is ahead of Washington in commercial kombucha expansion, but we have our own style. Our style is more traditional, letting the tea and culture stand on their own," said Casey.


The Puget Sound Kombucha Company currently occupies a small space in Magnolia, packed full of fermenting tanks and a business plan that foresees them outgrowing their space in the near future. Casey shared that he hopes to hire 1-2 people in the coming months to help with the day to day operations. Nationally, kombucha popularity has been skyrocketing with sales of the drink coming in at $600 million to $1 billion a year with a forecast of $1.8 billion a year by the 2020, according to retail analysts at Markets and Markets.


Casey and Emily both tout the health benefits of kombucha. "For anyone who drinks soda, they should replace at least one soda with kombucha." suggested Casey. "You can get that carbonation craving taken care of while getting a better energy boost and contributing to your health."


For anyone worried about the alcohol content in kombucha, The Puget Sound Kombucha Company's brews are all well below the non-alcoholic standard of .5% which means you can share your brew with a little friend or hoard it all to yourself.


The company currently carries three flavors - Earl Grey (a delightful combination of kombucha sour with bergamot orange flavors from Earl Grey tea), Green Tea (a light and refreshing blend of imperial green tea with raw kombucha culture and organic cane sugar) and Black and White (a blend of English breakfast, peony white tea and kombucha fermentation). All of their ingredients are organic.