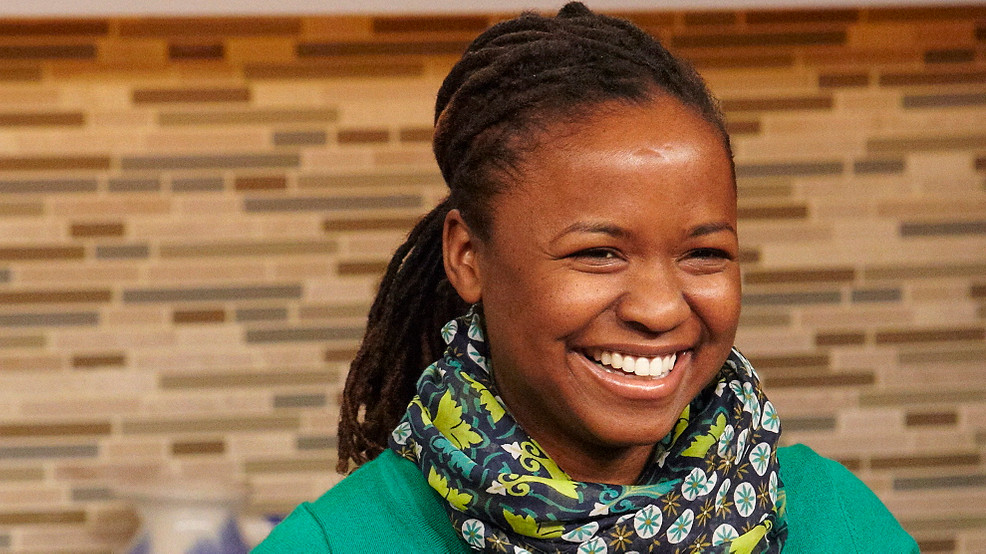 If Capitol Hill’s upscale vegan restaurant Plum Bistro were one of those “how it started, how it’s going now” memes, you’d see a photo of Chef Makini Howell driving around town in her parents’ Toyota minivan selling tofu sandwiches alongside an image of the many beloved establishments that make up the Plum empire today.

What began as a mother/daughter sandwich shop has evolved into several vegan food businesses under the same umbrella. For a fancy date night, hit up Plum Bistro. At lunchtime, visit the salad bar at Plum Chopped or the Plum Burgers food truck. Have a sweet tooth? Sugar Plum will fix that craving. Planning an event? Yes, Plum caters, too.

There’s also the Plum cookbook, oh and then there was that year Howell was hired as Stevie Wonder’s personal tour chef (!)

When Howell’s parents decided to become vegan after first going vegetarian nearly 50 years ago, they needed to figure out what to eat. At the time, the availability of vegan options were laughable, but her parents were committed to the lifestyle and figured out how to eat by preparing everything themselves.

Their kitchen experiments led to the creation of Hillside Quickies sandwiches, a line of seasoned tofu and seitan, a wholesale catering company, and Quickie Too, the family’s Tacoma diner, which opened in the 1990s and is still run by her mother, Niombi, today.

“My mother liked egg sandwiches as a vegetarian, so she started selling tofu sandwiches and went from there,” said Howell. “She showed people that you could do other things with tofu and really changed the natural food industry."

Born and raised in Tacoma, Howell moved across the country to New York City to pursue a career in graphic design and fashion. Food wasn’t at the forefront during those years because she knew how to cook, thanks to growing up working in the family business.

It wasn’t until she went out on a date with an attorney to a fancy restaurant when food suddenly mattered.

The idea to open a restaurant where vegans could enjoy a fine dining experience, like the nice places she ate in New York - started to play out in her head.

“I wanted to create something where people like me, young professionals who are cool and creative, could eat,” she said.

Ready for a change from New York, Howell made the decision to return to the Northwest in 2005 after her mom talked her into opening a sandwich shop. What was meant to just be a six month gig, led to the opening of one of Seattle’s most popular vegan restaurants.

Vegan before she was born, and having raised their children on organic, plant-based food, Howell credits her parents for laying the foundation for the Plum businesses today.

“My father created a plant-based product before many people gave diet much thought,” she said of her late father James, who passed away in February 2021. He followed a vegan diet for 46 years. “He was the spark that lit the flame that will help to guide us to a better way of interacting with food.”

Having made the conscious choice to remain vegan throughout her own life, Howell’s creations don’t try to imitate meat-based dishes or please the omnivorous crowd. She’s not in the business of telling people how to eat.

“I want veganism to be cultural American food,” said Howell.

What she does, and does well, is practice her craft so that when the people look for it, they know exactly where to go.

In June, Plum Bistro received a surge of attention during the Black Lives Matter protests. Located just outside of CHOP, the protester-occupied autonomous zone in Capitol Hill, the restaurant went from making $100 in a single day to bringing in over $10,000, figuring how to deal with the increase in demand on the fly.

With the shift toward plant-based eating growing more and more popular, Howell makes sure that she is always ready for the wave.

“Food is changing and there is a seismic shift happening in the food industry right now,” said Howell. “At the end of this pandemic, the number of restaurants that will be gone is going to completely reshape the industry.”

Howell has put a lot of thought into what Plum can do to navigate the pandemic.

When restaurants across Seattle put up tents, Howell went in search of an alternative, knowing that tents are temporary structures. Instead, they set up individual dining pods that are like mini greenhouses.

COVID mandates open-air dining, so the restaurant retrofitted a plexiglass see-through wall that kept out the cold air, but maintained airflow inside.

Howell also recognizes that in order to weather the storms, she must have a consistent team that will be there when she needs them.

Managerial salaries range from $70-100k. Before the pandemic, servers were paid $26.50 per hour. Currently, the lowest paid employee earns $18 per hour and gratuity is divided among all staff. Further, she offers health insurance to workers.

“I want to keep the folks I have through COVID,” she said. “The industry is built off camaraderie and it’s sad and lonely right now. You can’t ask people to keep going without paying them well.”

In a constantly evolving world, Howell’s plan is to always stay ready. “We won’t go back to packed restaurants any time soon, so we have to ask ourselves what we really have to offer,” said Howell. “My mom was a big proponent of practice. The notion of practice is what makes you ready and people will take notice of that.”

Want to support more small businesses like Plum Bistro? We're proud to collaborate with Intentionalist, an online guide that makes it easier for you to find/connect with diverse local businesses owned by women, people of color, veterans, members of the LGBTQ community, and people with disabilities.