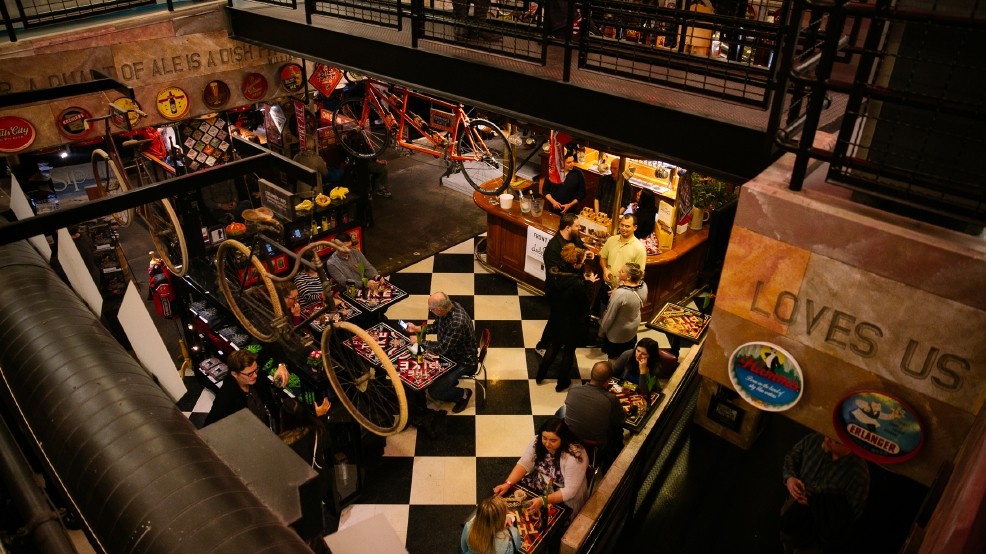 Pike Brewing's Chocofest brings beer and chocolate together at last

More than 700 chocolate lovers (and beer connoisseurs) united this past weekend to attend the 8th Annual Chocofest held at Pike Brewing Company on January 31. For $50 a ticket, the brewing company promised an evening filled with mouth-watering desserts from local chocolatiers, delicious bites from Seattle's best restaurants, and rare cask beers, whiskeys, and wine.

According to Zan McColloch-Lussier, Communications and Events Director at Pike Brewing Company, the event usually sells out in advance, and this year was no exception. An all year effort, Pike Brewing Company starts planning for the next Chocofest immediately after the last one ends. The brewery carefully decides who to feature at the event, paying attention to who is at the top of the Seattle food scene, and what new chocolatiers and breweries have opened up over the year.

As a relatively new Seattleite, this was my first Pacific Northwest food festival, and boy, did it deliver. Each person received 10 drink tickets, a glass to sample your beverage of choice, and unlimited tastes from the more than 65 vendors featured at the pre-Valentine's Day bash.

At first, I thought the price was a little steep, but after attending, I honestly think you get more than your money's worth. Sadly, I wasn't able to use all of my tickets (the pours for each drink were very generous), and when I tried to give them away at the end of the night, I found everyone else was in the same boat.

Best of all, you could spend your evening in a heavenly blur (I mean bliss) of chocolate and booze, and still feel good about yourself: the event benefitted Puget Soundkeeper, a non-profit dedicated to protecting and preserving the waters of Puget Sound.

Chocofest took over all three floors of the pub, and what first felt like a typical food sampling, soon took on a more party-like atmosphere between the melt-in-your-mouth desserts, seemingly boundless drink options, people of varying levels of intoxication, and live music from Lanford Black and Rouge.

Besides chocolate covered bacon (yes bacon), popcorn, truffles, mousse, gelato, cupcakes, and of course, chocolate flavored booze, there were savory bites offered for those who needed a sugar break. Participants could sample cheeses, bread, grilled cheese, and even barbecue pork before returning to their chocolate feast.

As a chocolate addict who eats it at least once a day, there was enough decadent goodness to satisfy even my sweet tooth, which isn't to say I didn't take some extra goodies to munch on later.

After sampling all the sweets, wine, and beer I could handle, I left Chocofest feeling satisfied and happy, my inner chocoholic glowing.

To join the party next year and satisfy your chocolate cravings, check pikebrewing.com to buy your tickets in advance.