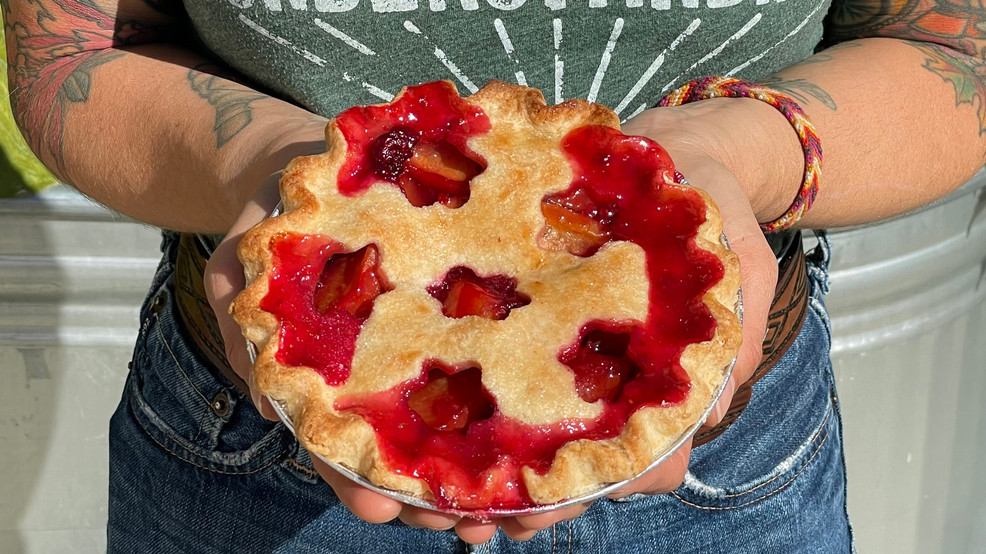 Vegan & gluten-free? Yes, you can have pies too

Ask any six-year-old what treat they’d like on their birthday, and you’re unlikely to hear a request for an olallieberry pie (an Oregon relative of the blackberry). You’ll probably hear cupcakes with sprinkles, confetti cake, or a chocolate cake in the shape of a volcano decorated with dinosaurs.

But Seattle chef Frankie Cannata-Bowman wasn’t interested in any of those options. From the time she was old enough to have a say in her birthday cake, her request was always an olallieberry pie.

What started as an affinity for this rare pie is now a one-woman operation at Piecraft Kitchen, where Cannata-Bowman is channeling her 15 years of high-end restaurant industry experience into the fine art of incredible pies.

Piecraft is hosting pop-ups all over Seattle with some of our favorite traditional pie flavors, as well as more adventurous combinations. To sweeten the deal, all pies from Piecraft Kitchen are undetectably vegan and gluten-free.

“I’m self-trained, so it’s been a series of learning on the job, taking up new skills, and keeping things interesting,” Cannata-Bowman said. “I started developing vegan and gluten-free pies, and while working on this gluten-free pastry crust, it just became a love of mine.”

At a recent pop-up at Distant World Coffeehouse, Piecraft Kitchen served two flavors: an apple cider pie with fall spices and vanilla, and a plum chai spice that took seasonal local plums and infused them with a Masala chai blend. An earlier pop-up included a collaboration with Fast Penny Spirits using their award-winning Amaro spirit in an apple cherry pie.

“Using seasonal ingredients is a big thing for me,” Cannata-Bowman said. “During the summer, people were asking about apple pie, and I was like, ‘No, you cannot have an apple pie until September! I’m sorry!’”

These fantastic flavor combinations come from what Cannata-Bowman calls her “Flavor Bible,” an Excel spreadsheet where she keeps notes and ideas of past and future flavors that play nicely together.

Did we mention these are all vegan and gluten-free and still result in a flakey, layered, tender, and crispy crust?

“When I first started with vegan and gluten-free pies, I found that the inclusivity really brought in a lot of customers,” Cannata-Bowman said. “There was appreciation, and people just got really excited about it. So many people are now owning their gluten-free and veganism.”

Cannata-Bowman counts herself lucky to have community support and encouragement from In The Shed, a maker’s market in Seattle’s Mt. Baker neighborhood, and Tougo Coffee, who helped her settle into a commissary kitchen.

“The response has just been amazing, and people are just blown away by having these options,” Cannata-Bowman said. “I really want to focus on throwing some love and care in these pies and taking the time to really develop these recipes.”

While the holiday shopping list may still have lingering items to acquire, we can sleep soundly knowing that Piecraft Kitchen has holiday desserts covered.

Piecraft Kitchen hosts pop-ups every weekend in Seattle with two flavors of 6-inch pies meant to serve four people. Check the schedule and pre-order pies on their website or find Piecraft Kitchen pies at Tougo Coffee located at 860 Yesler Way Tuesday through Saturday. Piecraft Kitchen is also open for custom orders, including those with gluten and non-vegan products.