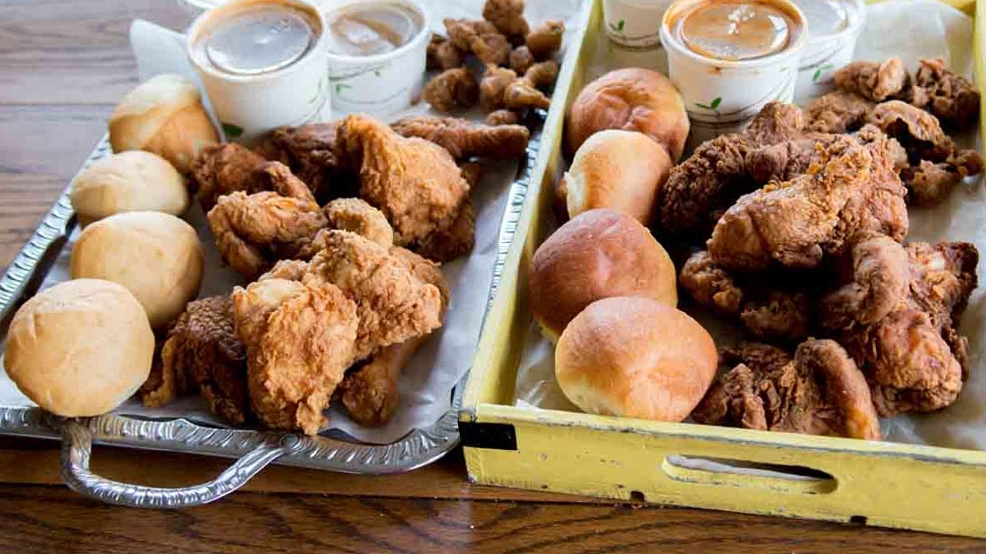 There are two top-notch fried chicken joints in this town now and only one can be the best. Gone are the glory days of Ezell's Famous Chicken, when Oprah flew it across the country and the aroma of chicken hitting oil wafted across 23rd Avenue, scenting the lunch of every Garfield High School student, no matter what they were eating. When he was forced out of his eponymous restaurant, Ezell Stephens set up shop as Heaven Sent Fried Chicken, and then there were two.

The value of the Ezell's name is not lost on either side. Lewis Rudd fought in court to keep the name when Stephens left the company, and across town, the words 'Heaven Sent' on the restaurant sign are smaller than "Owned and Operated by Ezell Stephens." At least as valuable as the name is the recipe, which, like the menu, is nearly identical at both places.

The difference between the two is execution. In a taste-off between Ezell's and Heaven Sent, there was a clear winner. To give each place a fair chance, the same order was picked up at about the same time from each place and driven to a central location, where it was laid out, photographed, and eaten.

The Order:
An eight-piece fried chicken dinner, half of it spicy and half original, which means a leg, breast, thigh, and wing of each preparation. It comes with two jumbo sides, which were baked beans and mashed potatoes with gravy, and four rolls. We added a side of gizzards at each place, too, because gizzards are great.

The Winners:
Visually, the Heaven Sent chicken was darker the original from HS was even darker than the spicy from Ezell's. That color translated to a slightly crispier coating, which was also slightly thicker, allowing more insulation to keep the chicken moist. Even that notoriously dry cut, the breast, was significantly juicier from Heaven Sent than from Ezell's.

Like any nostalgia-lover, I had wanted Ezell's to still be as good as I remembered it. And it almost was but Heaven Sent's chicken was better. In the original, the margin was small a slightly more flavorful batter, juicier meat but in the spicy version, it was magnified. It was clear that Heaven Sent had significantly more spice, without upsetting the flavor balance. Ezell's spicy chicken tasted watered down in comparison.

After judging the standard chicken, we assumed that the gizzards would follow along, but it turns out they're a different animal (pun intended). Gizzards have a tendency toward toughness and require precise timing to get right. Somebody at Ezell's had the magic touch on the timer, though, as they were tender as could be. Heaven Sent's were just a step behind, with a little too much chewthe better flavor couldn't overcome the textural obstacle.

On to the sides! The beans contest was over before it started. One glance at the Ezell's beans, sad sacks floating about in soup, and there wasn't much left to discuss. Heaven Sent's beans shimmered, suspended in a rich, viscous sauce, as they should be. The flavor followed the visual clues, too: a tangy, vinegar version from HS popped with sweetness, while Ezell's beans tasted as flat as they looked. This was the menu item with the widest divide, and the only one where the loser was actively bad, as opposed to just not being as good.

The mashed potatoes from both locations were unremarkable, but the gravy made a difference. Again, it was easy to pick a winner on looks. By the time the Heaven Sent gravy was opened, it had already started to separate. The Ezell's gravy was still together, and, moreover, tasted rich with chickeny-goodness. A quick stir improved the appearance of Heaven Sent's gravy, but there wasn't anything to be done about the flavoror lack thereof.

Whoever was manning the clock on the gizzards at Ezell's should, perhaps, be put in charge of the rolls too, because they were less well-timed. They looked as if they could have used another few minutes in the oven, coming to us quite pale. Though more time wouldn't have solved the other problem: they were excessively sweet. Heaven Sent stepped in here, demonstrating the beautiful golden color of a great roll, and with just the requisite sweetness to make it perfect for mopping up gravy (but maybe that could come from Ezell's).

Winner, Winner, Chicken Dinner: Sure, Ezell's won a few of the side dishes, but when it comes to a fried chicken dinner, fried chicken is what matters. So Heaven Sent is the winner, and Ezell Stephens proved which place deserves to carry the "Ezell's Famous Chicken" monikertoo bad the courts disagreed.