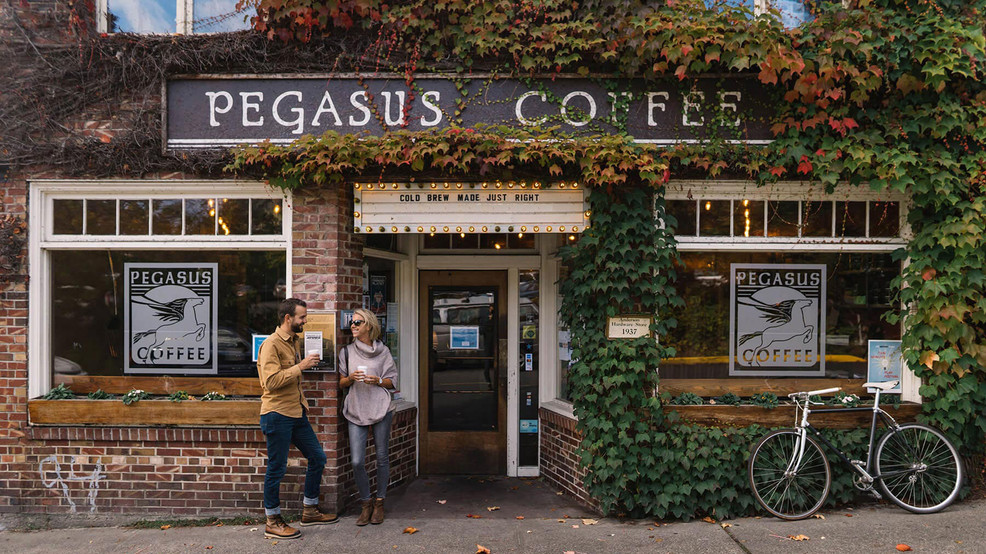 Pegasus Coffee House, where the history is as rich as the lattes

When it comes to Seattle coffee pioneers, a certain two-tailed mermaid leaps to mind. Yet few know that a small roastery and coffee house on Bainbridge Island has been serving up espresso drinks even longer. Pegasus Coffee Company and its new owner Matt Grady are eager to share that 42-year history - along with a passion for artisanal coffee — and prove this horse with wings is fit to fly.

Grady, who credits espresso for fueling his MBA degree, bought Pegasus Coffee Co. in 2019 following two years in strategy at Starbucks. Early this year, the New Hampshire native also took ownership of the charming and historic Pegasus Coffee House in Winslow, tucked cozily among the marinas and pubs along the harbor. The move reunites the roastery with the original retail business, which had a string of different owners in recent years, after more than 20 years apart. Two additional Pegasus coffee shops in downtown Seattle continue to license the name and serve the island-roasted, small-batch coffee but operate independently.

"To stumble upon Pegasus, it brought everything together for me," he said. "It's a historic company in a gorgeous building with ivy growing on it, and it's a coffee pioneer with its own firsts. That's what prompted me to get into the business."

That history began in 1979 when founder David Dessinger began selling espresso out of an old brick garage on Eagle Harbor where he roasted beans under the tutelage of Alfred Peet (of Peet's Coffee fame). A few months later, Dessinger opened a coffeehouse in that same 1937 building, which has housed the cherished cafe ever since. Starbucks opened its first cafe a few years later, Grady notes. Over the decades, Pegasus remains a favorite gathering place, drawing a cross-section of islanders from artists and liveaboards (Dessinger was once one of them) to remote workers on laptops.

Grady aims to honor that legacy while modernizing and refocusing on serving exceptional coffee. To that end, he has updated the Pegasus logo and packaging, which hadn't changed in 35 years, and simplified the menu. And while known for darker roasts, the roastery has broadened its bean selection to include medium roasts as well as single-origin beans. It also touts direct trade relationships with coffee farmers and farming cooperatives in Nicaragua and Guatemala that support ethical, sustainable practices.

"We source excellent coffee ethically, and we really care about our roasting process," Grady said. "I think that shows up in the cup."

The company will soon open a pop-up location on Winslow Way in the courtyard of the Orchard complex (across from Town & Country Market). It plans to sell espresso, drip coffee and pastries out of a mobile trailer there by June 10, Grady said. For home brewers, Pegasus Coffee is also now selling its beans, bean subscriptions and brewing equipment online while maintaining wholesale relationships with two dozen or so markets and restaurants around the Puget Sound.

While it's been fun to finetune the business, what Grady finds most gratifying about taking the reins at Pegasus is being part of island lore and so many personal stories.

"Almost anyone I meet in the area, we talk about Pegasus," he said. "And they go, oh, and start telling me a story about going there as a kid, or how their cousin used to work there, or how they were there when it started and could smell the coffee roasting."