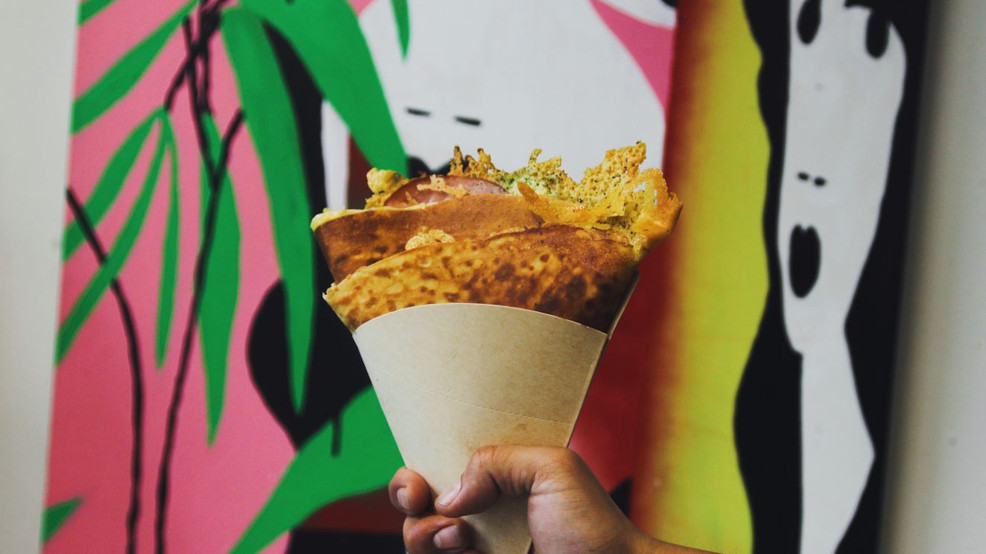 If you’ve ever wondered why stepping up to the window and ordering a crepe at La Rue Crêperie on Capitol Hill felt so European, all you need to do is follow the path of one of its owners, Alex Villa.

It was Villa’s post-college ventures to Spain, France, Italy and the Netherlands that served as his inspiration and nudged him to follow his passion for food. Villa wasn’t about hitting up the major metropolitan cities in these countries. Instead, his interests were much more geared toward the rural areas, working on goat farms, veggie farms and homesteads.

"All the farm-to-table cooking really inspired my mind and my belly," said Villa.

After a stint working at a vegan food truck near Amsterdam, Villa made his way to Seattle. That was back in 2016 when the Green Tortoise Hostel still had an outpost across from Pike Place Market.

Villa was able to arrange a little work-trade with them, where he received boarding in exchange for some work while he decided if he wanted to call Seattle home.

Fortunately for us, his answer was yes.

In the ensuing years, Villa went on to work for some Seattle food scene faves. He did some cheese mongering at Bottlehouse in Madrona and led catering for events in Bottlehouse’s "cute backyard." Villa also worked for another Madrona standout, Vendemmia, as well as the gastropub Quinn’s on Capitol Hill.

Along the way, Villa shared the kitchen with some "cool chefs and sous chefs" that taught him a lot in a short amount of time.

Fast forward to 2020 and Villa and his partner and co-owner, Danae Alexander, officially opened the doors (or rather, the takeaway window) to their petite, 300-square-foot creperie La Rue.

If you have yet to visit La Rue, you will find the charming duo taking orders, making delicious sweet and savory crepes and generally passing along positive vibes to the street scene that bustles by on E. Olive Way.

"What inspired us to open La Rue was being encouraged by our neighbor and friend Taylor Cheney who owns Yalla," said Alexander. "[Taylor] also introduced us to our landlord Adam Simon, the owner of The Reef pot shop. If it wasn't for both of them, we wouldn’t have La Rue."

At the time, Simon was looking for someone to build out a small eatery concept below the Reef in the extra space they had. Villa and Alexander wrote a business proposal for crepes and coffee, and were fortunate enough to get help from Caffe Vita for their coffee program. Later they took out a loan and started building the café in the summer of 2020.

"After that, we coordinated a pop-up at our friend’s Union Coffee café in the Central District," added Alexander. “We had a great response to our crepes in handheld cones. After getting a small following using Instagram, we opened the creperie in the midst of the pandemic in November of 2020.”

The last time we dropped by for a midday snack, a persistent Seattle drizzle had us in the mood for the 'Fun Guy' (pun intended), La Rue's take on a mushroom crepe with cheese, leek confit and an organic egg. And our sweet tooth did not allow us to leave before ordering 'The Nutella,' with bananas as the classic topping.

Given the limited kitchen space (they only have two crepe stones), they admit that it can be hard at times to keep up with demand. But it is also what allows them to deliver such an intentional product.

"We have a sentimental connection with the café since we built it out of a dusty storage space ourselves, so we naturally take pride in everything we do here," Villa said.

When you stop by La Rue, you may notice that music plays a big part in the experience. Named after a French jazz song by a group from the 70s called Cortex, La Rue also curates a series of events called "Crepes and Crates," where DJ @waxwitch spins French-themed vinyl from their takeaway window for all to enjoy.

Opening La Rue during the pandemic came with its own set of challenges and rewards.

"We have honestly learned more in this last year than we have in our entire lives," they shared. "The days where we are just constantly busy all day are always a big surprise and a reminder of how great our concept is and how lucky and privileged we are to own our business and work for ourselves."