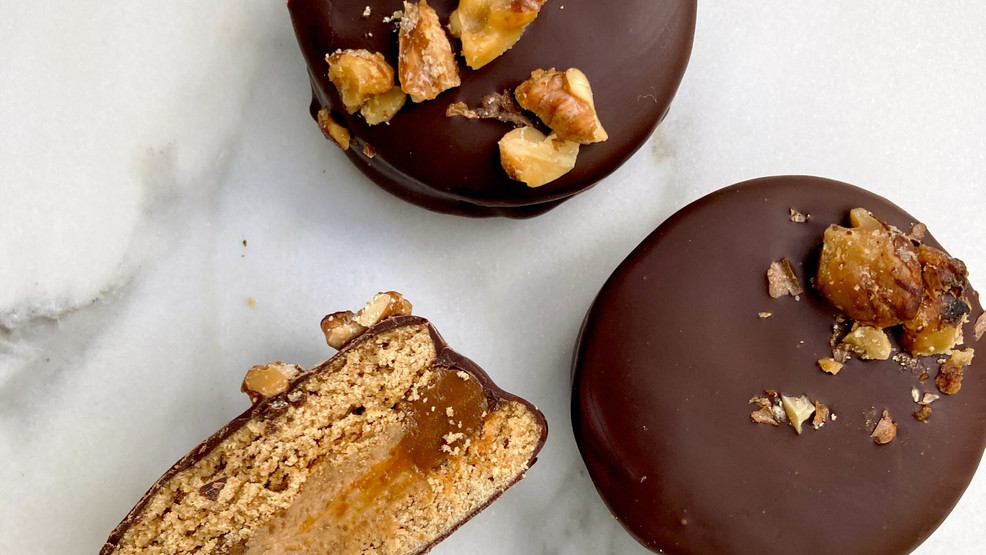 Oso Negro Baking Co. is a pastry pop-up born from the apartment kitchen of two chefs during the pandemic.

Aislinn McManigal and Sebastian Quintana met as cooks at Tom Douglas' Lola, where they fell in love on the line and later married. Today, the couple has launched a small business making alfajores, South American sandwich cookies that Quintana introduced McManigal to on a trip to Chile visiting his family.

"Every time we were eating them, I just kept having that thought process, which is definitely a chef thing to say, but I just kept thinking about how I could make them and make them better," said McManigal.

It wasn't until quarantine, when many turned to baking sourdough bread to ease pandemic anxiety, that McManigal and Quintana used the time to refine their alfajor recipe and launched Oso Negro Baking Co. The name, meaning black bear in Spanish, was also born from a quarantine conversation.

"When we were first working on the recipe, we went on a walk and were talking about what kind of spirit animals we would have, joking that we were both bears because we love eating and we love sleeping. We then started talking about Oso Negro as our business name, picking a black bear for the Northwest," said McManigal (a close look at their logo, and you'll see a black bear with a pot of dulce de leche replacing the typical honey pot).

Just as Oso Negro Baking Co. began through travel, alfajores have a history linked to migration.

They are believed to have originated in the Middle East, deriving their name from the Arabic word alajú, which means stuffed or filled. When the Moors traveled from the Middle East to Andalusia, Spain, they brought an early version of the alfajor with them. Alfajores are believed to be related to the popular Middle Eastern cookies ma'amoul, which have a similar buttery texture and are stuffed with date paste, not unlike the filling between the sandwich cookies.

The Spaniards would then bring the cookie to South America through colonization, where today the cookie is incredibly popular, particularly in Argentina, Peru and Uruguay. Two brand names tend to dominate the market, La Casa del Alfajor and Havanna, which you might find imported in South American markets in Seattle, coming wrapped in their signature foil, but it's rare to find these cookies made from scratch here.

Alfajores consist of two shortbread-like cookies sandwiched together with fillings. The classic alfajor de maicena is made with a combination of cornstarch and flour. The cornstarch lends the cookies their very delicate texture that makes them melt in your mouth. They are commonly filled with dulce de leche, a thick caramel-like sauce made by slowly cooking down sweetened milk, but there are many regional variations on fillings. Alfajores are also often served rolled in coconut or dipped in chocolate.

Oso Negro Baking Co. brings their own spin to the cookies, drawing inspirations from seasonal Pacific Northwest produce and their favorite flavor parings like espresso and chocolate or chocolate and peanut butter. Their dulce de leche is housemade, slow-cooked for 12 hours, and the nut butters and extracts used in the cookies are also all made in-house. Unlike the big brand alfajores, the couple sources higher quality ingredients from Valrhona chocolate to local flour from Cairnspring Mills or Small's Family Farm.

You can find both the classics and their seasonal flavors at the Burien Farmers Market on Thursday and the Fremont Farmers Market on Sunday. Their cookies also regularly pop up around the city, including this upcoming Mother's Day at Stoup Brewing or later in the month at Fast Penny Spirits.

While alfajores are their specialty, the couple hopes to expand into a brick and mortar where they could have a mercado or Latinx market filled with homemade South American treats both sweet and savory, meaning the Oso Negro Baking Co. has no plans to hibernate anytime soon.