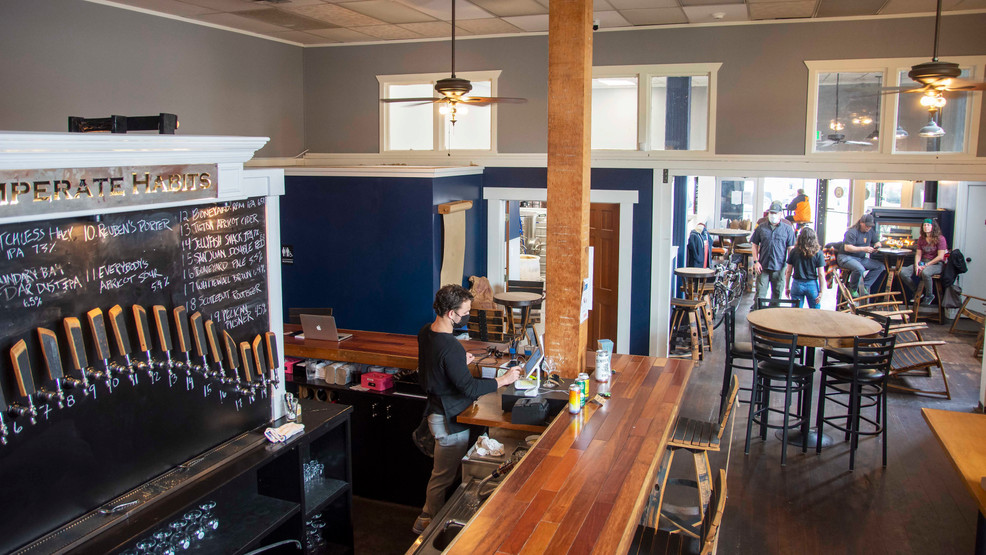 Temperate Habits: An old-fashioned, family-owned brewpub in the heart of Mt. Vernon

A cozy, family-owned brewpub in the heart of Mount Vernon makes one feel like family from the get-go. Kinda in the vein of “Cheers”, if you are old enough to remember the hit ‘80’s TV show.

Temperate Habits may be the newbie in town but they are fast becoming the destination for locals to kick back, hang out, and sip on a cold one.

Katie King and Brooke Bosserman have a few characteristics in common as owners of this brewpub. First, they are cousins who grew up together, played together, became best friends, and are now brewing beer together. Second, they are also both pharmacists and as such are expected to be “of good moral character and temperate habits”, or so states the literature of their profession. For over ten years they have been just that, making the decision on a name for their brewery an easy one.

A temperate habit may encompass a moderate or mild nature and include relaxing or meditative tasks. As Bosserman told me, “we just liked the phrase. Brewing is how we relax and our temperate habit.”

After spending some time in Germany, they became curious about beer and beer making. It was Bosserman who first purchased a “Mr. Beer Kit” as a gift for King and kicked off their brewing adventure.

“The first try was terrible but loads of fun,” says King. “We decided to go bigger and better and have another try.”

Their first real brew was a stout.

"It came out well giving us inspiration and the feeling ‘we can do this!'" she said. Their dream began to take shape.

Using friends and family as guinea pig taste testers, they began to create their own brews. Currently, they have 10-12 original recipes to the Temperate Habits name, taking the knowledge chemistry and applying it to the alchemy of making beer. A very unique feature hanging next to the fireplace in the brewery is what looks like a periodic table, which would list various chemical compounds, but listed on this graphic table are various styles of beer.

As a woman-owned business, they find the community of Skagit Valley warm and welcoming. There is a growing industry of craft brewers as well as women brewers in what is traditionally a more male-dominated field. King chuckles when there is still a slight surprise as a customer discovers the brewmaster is a woman.

All in all, King and Bosserman have remained calm with their temperate habits nature through a year of many starts, halts, and pauses. They purchased the brewpub in January of 2020, not knowing what the future held or about any global pandemic. It was not until August they officially opened their doors deciding it was now or never, only to be temporarily shuttered to indoor dining a few months later. As many restaurant businesses did, they pivoted their plan slightly, focusing on take-out, local delivery, and a small, designated area for outdoor dining. At times it felt like a scramble yet the support from the community offered King and Bosserman the reason to persevere.

Now, with lifted restrictions, business has returned to normal and appears to be booming!

King and Bosserman created a new brew for the Skagit Farm to Pint Fest called “Lightly Buzzed”. This ale is a Honey Lavender Blonde with a light lavender scent and mildly sweet finish. Perfect for a sunny evening enjoying the Skagit Valley. They are pairing it with a delicacy from their kitchen which also includes great takes on the standard pub fare like poutine, burgers, and mac n’ cheese.

The Skagit Farm to Pint Fest features 13 Skagit Valley Breweries and is going on now through April 30th, 2021.

Temperate Habits is open seven days a week with an intimate, home-like atmosphere. They even brew the ales right in the middle of the pub for a close-up view of the process. Both King and Bosserman may be found wandering around, chatting with customers, and filling orders in their easy, friendly way. Their hope is for everyone to come in, relax, and stay awhile.

“We are thankful people are embracing us into the community. We want to pay that forward,” says Bosserman.

As for the future dream, an expanded brewing capacity with a taproom is in the vision. Perhaps they will consider distribution at some point but for now, they are smitten with their neighborhood brewpub with the temperate habits..

You can find Temperate at 500 South 1st Street in Mount Vernon. Their hours of operation are 12 - 9 p.m. every day, with indoor and outdoor seating.