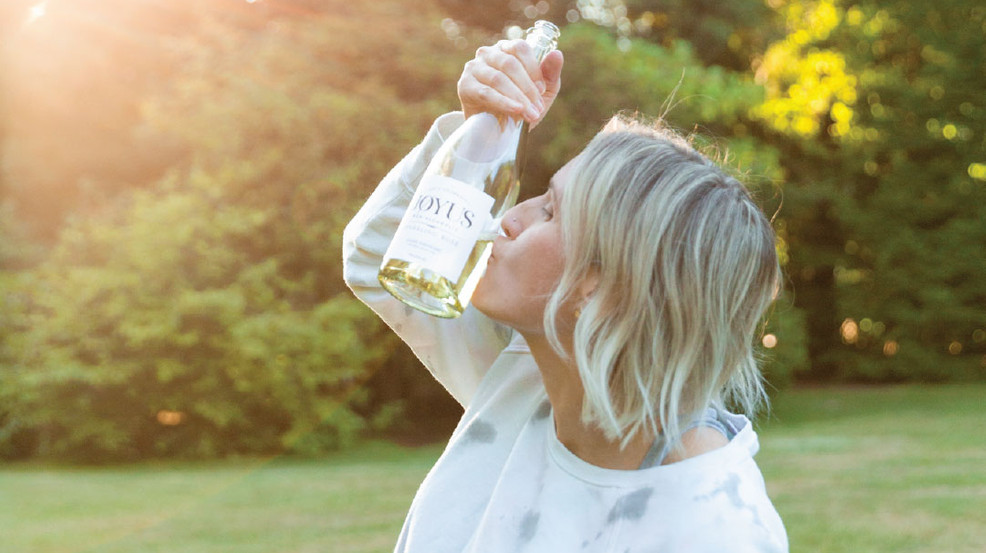 You’ve probably heard of the term “sober curious” by now.

Coined by journalist, author, and sober warrior Ruby Warrington, the “Sober Curious” movement has swept the nation, making women and men alike take a closer look at their relationship to alcohol.

I too have gone on my own sober curious journey of sorts.

During the summer I was incredibly sick of alcohol. It was everywhere, and involved in every single activity I was invited to. Going swimming? Bring some beers. Going for a walk? Wine in a Nalgene bottle, and the list goes on and on and on.

Sure, I’m in my mid-20’s and it’s a common activity amongst us 20-somethings but BOY was I tired of it.

I was, to put it bluntly, bored of spending my Sunday mornings and afternoons with a hangover. I was tired of feeling tired on Mondays and was noticing that I didn’t even feel like a normal human being until Tuesday evening around 7 p.m.

More than anything, I started to feel like my free time wasn’t all that free after all.

My free time was consumed with happy hours which led to nights out with friends and then recovering from it the next day. Even with a hangover I would lose a day to just being lazy and glued to couch scrolling through Netflix (and yes Netflix, I AM still watching).

Alas, my sober curious journey. I cut out alcohol completely, picked up some books to read about young women who had also quit alcohol as an experiment and I learned a lot.

I stopped drinking for about two months and to put it lightly - I never felt better.

For starters, I was SLEEPING, and I was sleeping hard. My skin cleared up, I trimmed down, I was exercising every day and my mood improved ten-fold.

In a world that is so adamant about promoting “self-care” this and “self-care” that how can we possibly keep up with it when getting happy hour and drunk every weekend is on the docket? It’s like we are actively working against ourselves.

It wasn't all sunshine and daisies, though. The thing I missed the most during my sober summer was the act of uncorking the wine bottle; hearing the glug, glug, glug sound the first pour made, the ritual, the communion, sitting down with the gals and spillin’ the hot goss.

Cue, Jøyus Wines, a non-alcoholic wine that looks and, wait for it, tastes like actual wine. Sign. Me. Up.

Jøyus Wines was created by Jessica Selander, a Washington native with 16 years of sobriety under her belt, who set out to create a non-alcoholic wine as an alternative to folks who are sober or are searching for a bit more balance.

“I set out to create non-alcoholic wines that tasted like the wines I missed," said Selander. "Wines that I would want to drink. So it was born out of necessity but it’s also a labor of love.”

The idea of Jøyus Wines was born after a friend’s bachelorette party. After drinking cran soda after cran soda, Selander’s interest in non-alcoholic wines was piqued.

“It was at one of my really good friend’s bachelorette parties, that I just hit my limit,” said Selander. “There were all these women all drinking wine, and I’m sitting there yet again with my fizzy water and I was tired of feeling left out.”

A friend went with Selander to the grocery store in search for a non-alcoholic wine. With so many options for no booze beer, there had to be zero proof wine, right?

“So we went and looked and there it was! I bought it, brought it back to the party, and it was awful. It was so so bad. But it changed everything,” said Selander. “It was nice to drink something that looked like what everyone else was drinking out of the same glasses they were. I didn’t feel like an outsider anymore.”

Even though the wine was available to her, she wanted something that tasted better. So after researching and trying to find a non-alcoholic wine, it was up to Selander to create her own.

“I started saving and researching. I talked to wine industry people. And the response I got at time was not great. There was this visceral negativity from the industry. I hit wall, after wall, after wall. Then— after many years of trying— I got pregnant with my second child and so I set the project down.”

Then after baby? COVID-19 happened, forcing Selander to reexamine her life. What did she want? What kind of impact could she make?

“Like a lot of people, I started reevaluating my life. The deep questions. I was like, 'If not now, then when?' So I dusted myself off, picked it back up and just went after it again as hard as I could. And things started working out. I found people who were not only receptive to the idea, but helpful.”

Things started clicking. Selander found wine folks who were not only interested and receptive to the idea of non-alcoholic wine but were helpful to the process.

Jøyus Wines, after many trails and tribulations, was born. Hallelujah!

“I was able to create two wines that I absolutely love, a non-alcoholic Sparkling Wine and a non-alcoholic Sparkling Rosé. The goal and the vision is to have a complete product line. But I started with the fun stuff. The celebratory stuff. Because when you get married, when you get a new job, you want to be able to celebrate and feel like an adult. I want that for people.”

The red varietal is currently being tested and created, but you guys - these non-alcoholic wines really taste like wine. I tried both of them and as someone who considers themselves to be a wine-o, I couldn’t tell you the difference. And it truly is about the experience in its entirety.

“I gave Jøyus non-alcoholic wines the same love, care and attention that’s normally given to full-alcohol products. The wines taste amazing, but people also want the experience,” said Selander. “With Jøyus they can pick up a heavy glass bottle with a beautiful label and pop a cork. It feels special. Everything about it is the same as a bottle of alcoholic sparkling, it just has the alcohol removed.”

So, is Jøyus wines for you?

“People buy them for many reasons. They’re sober curious or sober themselves. Or their partner is sober and they want to be supportive. Or they went through menopause and now alcohol makes them feel sweaty and weird, but with a glass of Jøyus, they can participate again with their girlfriends. As long as they’re happy, I’m happy,” said Selander.

With good flavor and even better intentions, Selander and Jøyus Wines are just getting started.

“My goal is a deep one. I’m not setting out to be the only premium non-alcoholic winery whose products actually taste like wine. I’m doing this to normalize non-drinking culturally. I dream of the day I can walk into any grocery store and pick up a couple of different bottles of great tasting non-alcoholic wines,” said Selander.

“I want to go to a party and find there’s already a bottle of non-alcoholic wine there. And that means people need variety. It also means making this available everywhere so adults have those options easily accessible to them.”

Jøyus Wines is currently on shelves at Wildwood Market in West Seattle, DeLaurenti Food & Wine in Pike Place Market, all Market of Choice grocery stores in Oregon, all Town & Country and Central Market stores in Washington and online.