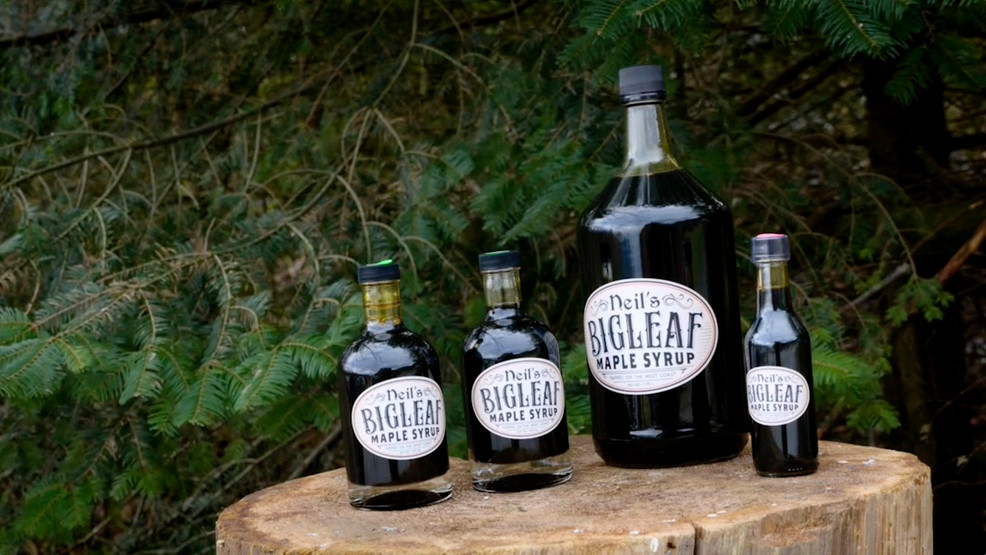 Acme, WA is home to the only syrup producer in the western U.S.

Two hours north of Seattle in Acme, Washington, one family is watching the weather forecast closely. It's below freezing now. Too cold. What they need is a typical late winter day in this area, cold overnight, just warm enough during the day to thaw everything out. When that happens, the sap starts running. Perfect conditions for making maple syrup.

At Neil's Bigleaf Maple Syrup, official titles aren't really a thing. McLeod was the one who first started making syrup, with help from his wife, Delight. Their son, Day, is the company's frontman handling, among other things, marketing and distribution.

If you're thinking to yourself, "wait, maple syrup can be made in Washington?", you're not alone. Most folks didn't think our region's weather patterns would support commercial syrup production, because it's generally much warmer during the winter than east coast syrup hot spots like Vermont and New Hampshire. That all changed when McLeod decided to give it a go about a decade ago.

"I always kept bees my whole life. Then the big hive collapse came and I lost all my bees," explained McLeod. "So the logical thing was I read an article on Bigleaf Maples from the 70's where the state said [making syrup] could be done, but financially it wasn't worth the effort."

"It intrigued Neil enough that he was like 'Heck, I'm going to give this a shot'. He went out with a drill and realized at the right time [the sap] does drip, got on Amazon, ordered some supplies and went from there," said Day.

"At first [Nei]) was just tapping trees and carrying all these jugs home and [making syrup] over a big fire," added Delight. "We were just giving it away as gifts."

McLeod started producing enough syrup for 40-50 bottles a year, handing them out to friends and family. But Day also runs a dynamic, multi-faceted farm, and has relationships with a number of restaurants in Seattle and on the west coast.

"I look them some samples and said 'Hey, you've got to try this'," said Day. "It was actually Canlis, we got to know them really well. The only response I got was like 'How much can you get me?' That was the only response. I was like 'Shoot, I don't know. I'll find out'."

That's when McLeod, Day and their small team got serious about the science of sap collection. In all, they've got 15-20 miles of sap collection lines running through four different sugar bush locations around the area.

"Okay, [the sap] runs through this line to an extractor, which is under vacuum. It runs in there, fills up, a pump comes on and pumps it over to my sap holding tank," McLeod explained to me at one of the sugar bush locations on the property. "From there it goes through reverse osmosis, into a concentrate tank and into my evaporator."

Since McLeod is making syrup in small batches, the flavor and color of the product changes throughout the four months of the year when he can collect sap. The syrup is lighter with more vanilla notes at the start of the run and darker with heavier caramel flavor towards the end.

"There's a night and day difference if you taste my syrup over east coast. I imagine on the east coast they won't like it as much. On the west coast it's doing well," said McLeod with a laugh.

Neil's may be the first commercial Bigleaf syrup producer on the west coast, but they certainly don't want to be the last, because if more people are making maple syrup it will actually benefit the environment.

"We've cut down our maples trees as firewood. They're considered junk trees. More is written about how to kill them than how to grow them," explained McLeod. "My idea is to start taking secondary farm land. If you planted that into maples and planted forests of maples, not only are you pulling carbon out of the air, there's no more irrigation, there's no more of this heavy equipment running over the ground. You're building canopies for birds and insects and you're going to take a high dollar crop. For the next hundred years you're going to be pulling sap [out of the trees]."

Turning sap into syrup. There's no doubt, it's a lot of work, but for the folks at Neil's Bigleaf Maple Syrup that's what makes it all extra sweet.

"There's a lot of words out there 'handcrafted', 'small batch'. You want to see handcrafted and small batch? Come hang out when we're cooking syrup," said Day. "From that standpoint it's very exciting and very proud to be making the actual finished product for sure."