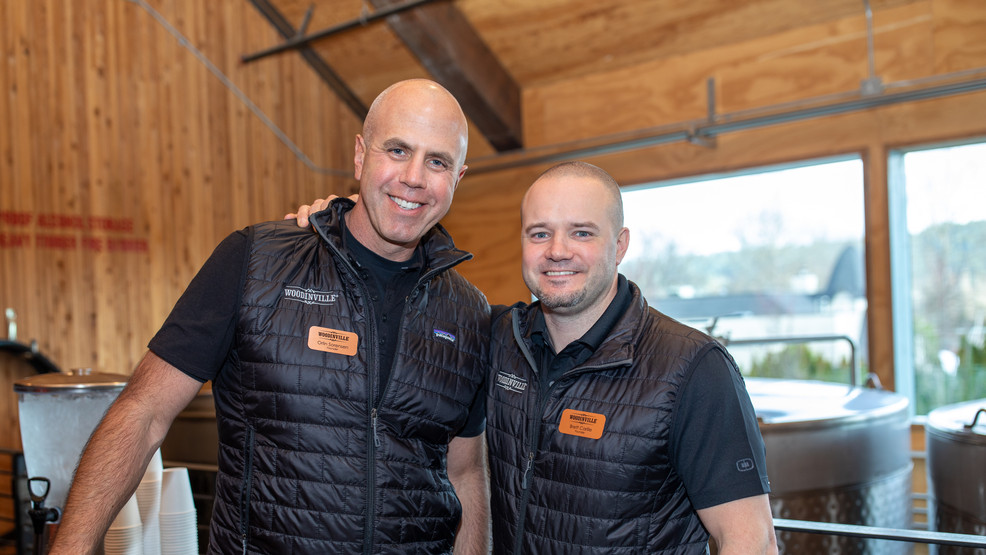 These two share the dream to make the greatest craft whiskey in the world by bringing the time-honored traditions of bourbon production into a craft environment. (Image: Woodinville Whiskey Co.)
SEE MORE

From best friends to business partners, Woodinville Whiskey Co. Founders Orlin Sorensen and Brett Carlile grew up together in the PNW.

"We went to Bothell High School together then we both ended up at Central Washington University,” said Orlin. "Our friendship really grew in college when we decided to become roommates.”

Out of college, Sorensen became a commercial pilot while Carlile worked in tech and then construction.

"We would have late-night conversations about our careers and true passions,” said Carlile. “Whiskey was something we both had a great interest for, so we decided to jump in headfirst.”

The duo started producing whiskey in 2010 with a smaller operation. They knew they needed a mentor and went to whiskey expert Dave Pickerell.

“I cold-called him,” said Sorensen. “When he didn’t get back to us, I actually flew to Chicago to attend one of his conventions and met him in person.”

"Dave agreed to mentor us, and this was the defining moment that helped lay the groundwork for the success we’ve received this far,” said Sorensen. “He taught us the ropes of the whiskey world and we are forever grateful.”

Sadly, Sorensen tells us Pickerell passed away unexpectedly in 2018, "He will always be a huge part of this legacy and every bottle of whiskey that leaves here, he's impacted.”

In 2015, Woodinville Whiskey Co. shared its flagship whiskey with the world and they haven’t looked back since.

“We started winning awards and getting recognition on a large scale,” said Carlile.

When the pandemic began in 2020, when so many businesses had to close shop, Woodinville Whiskey Co. thrived.

“After a couple months of chaos we shifted and made it work” said Sorensen. “We flourished and spirit sales were up by the end of 2020, growing over 100 percent.”

The company has grown from 8 employees to 35 over the past two years.

“10 years from now we’d like to see our whiskey sold in all 50 states,” said Carlile.

It’s been a friendship 25 years in the making that just keeps getting stronger.

"Being business partners and best friends just works for us” said Sorensen. “Even our wives and family are close, and we wouldn’t have it any other way."

Want to sample the goods? Visitors are invited to sample special releases in the tasting room in Woodinville, open seven days a week. You can also shop online at www.woodinvillewhiskeyco.com.