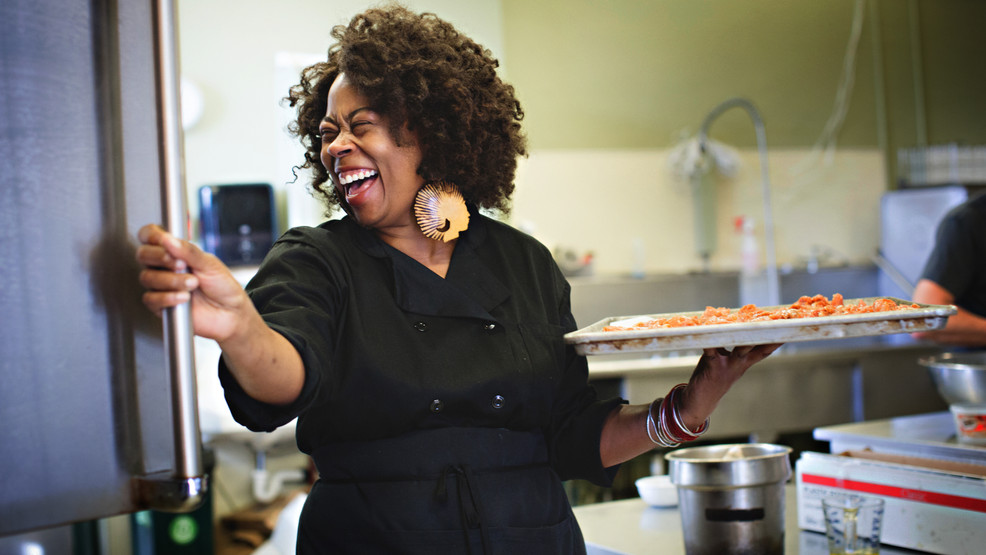 "Everybody's gotta eat!" — that's the mantra that chef Kristi Brown (Chef Goddess as she's fondly known), lives her life by and has been chanting since she was a young girl.

Communion, Brown's newly opened restaurant which she co-owns with her son, Damon Bomar, echoes this very mantra. The restaurant has a momentous home in the Central District's Liberty Bank building at 23rd and East Union Street, is a nod to the original Liberty Bank - the first Black-owned bank west of the Mississippi River, as well as an an ode to the neighborhood's rich Black heritage.

Brown spent a good part of this summer at Seattle Community Kitchen Collective, feeding whoever needed a hot meal. There were no questions asked, except how many plates were needed. Brown's love for eating is what fueled her love for cooking and feeding people. Savoring good food and being intrigued by it is the first step in learning how to cook.

"Pretty much my entire life has led to this moment, this path of me cooking," she said. "I love food. I've always loved food. When I was little, my dad used to make steaks on the fireplace grill, and I was always first in line with my plate in hand. It was that grill — all that fat sizzling on the grill, that mesmerized me. And I've been trying to duplicate that ever since."

What's her food like, and what is she inspired by? It is an amalgamation of her upbringing, Black roots and travels set against the Pacific Northwest's melting-pot culture and unique geographic bounty. One thing's sure; her food has a vibrant "Seattle soul."

"I'm from Kansas City," said Brown. "I've always loved Northwest fresh food because I grew up with a lot of vegetable eaters, and we're family, although we love meat as well. I have lived all over different parts of Seattle. And I take something from everywhere I live. My food reflects where I come from; there are a lot of collard greens, fried chicken and mashed potatoes. But there are sushi rolls as well. Some of the stuff is just me."

"That Brown Girl Cooks, my catering business was the second phase of my career; now I'm in phase three," she said. "It started because of the hummus; we needed a name to put in under. The black-eyed hummus got started as a way to honor where I came from, and also honor where I was at that time in my life. I was just starting my culinary career under a beautiful woman, Chef Tracy McCray. And I just wanted to impress her, to do my best. I really blossomed under her and found my own voice. I made the hummus there; we put in on sandwiches, on appetizer platters, on everything. I took it with me and found that opportunity to make it for catering."

The hummus has the comfort of a traditional chickpea-hummus but has an elevated kick from Ethiopian spices and a luxurious creaminess that black-eyed peas bring. In a way, her legendary hummus encapsulates the very essence of Brown's cooking — she makes the most comforting of comfort foods using the freshest Pacific Northwest produce and amps up the taste with robust seasonings and full-flavored spices.

"Pho. A bowl of steaming, hot pho is definitely my comfort food," she said. "I love different kinds of soups and broths. I found a lot of people don't order soup when it comes to catering menus, but there's [...] a lot of flavorful, comforting soup in my restaurant for sure."

Culture. Community. Cooking. These are all a part of Brown's culinary DNA and reflect in the food she cooks and how she serves it. Brown wanted to create a safe space that was inclusive, dynamic and served delicious food. A place where one would feel right at home.

"One of the biggest challenges, especially as a woman, is having access to capital," she said. "It clearly hasn't stopped me, but it took a colossal amount of effort. Having access to capital and being able to pay people what they're worth is a big deal. But the biggest reward is, you know, being a part of a community, having folks believe in you and trusting in the quality of what we're bringing to the table. Today, more than ever, it is important to know people individually and not put them in a box. That's the need of the hour."