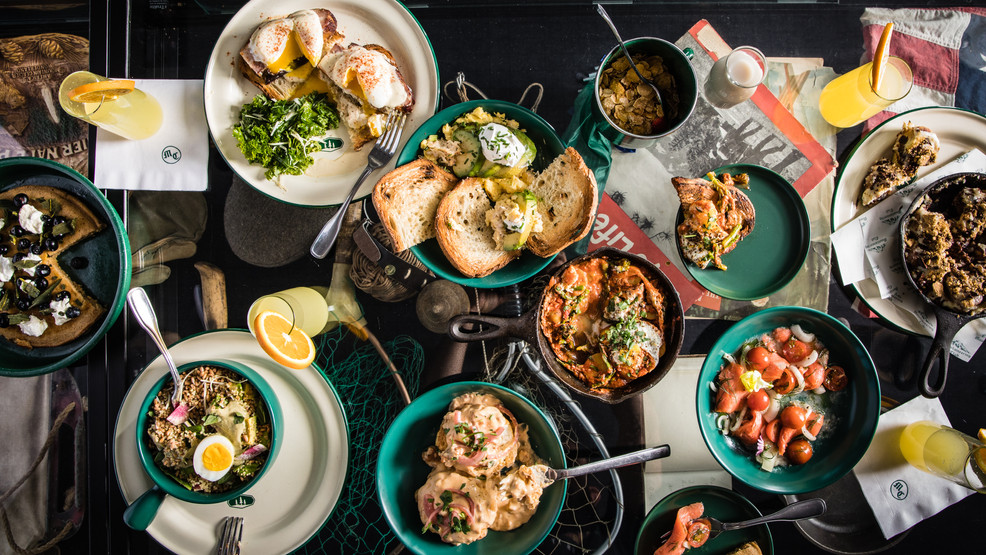 Mountaineering Club, a good-vibes-meets-even-better-views bar on top of the Graduate Seattle hotel, recently welcomed new bar lead Ricky Agustin. The Kent native just returned to the PNW after a seven-year stint in NYC, and can't wait to share his talents and Filipino culture with lucky guests at this University District oasis.

"Learning a little more every day is my favorite part of the job," he said.

He got into the business while completing his undergrad at UW, when he scored a "sweet" dishwashing job at Jamie Boudreau’s Canon on 12th Avenue.

"Not long after, a bartending position opened up at Eric Banh’s Ba Bar; I mentioned I was working down the street at Canon, and before I could tell him I was scraping plates and scrubbing restrooms, he hired me on to tend bar at the noodle shop a few days a week," he said. "They say you can’t teach hustle, but work with Eric for a year, and you can work damn near anywhere."

In May of 2013, he was recruited by Audrey Saunders to work at NYC's Pegu Club, where he spent seven years under the mentorship of "some of the finest artistic, technical and operational minds in the world," Augustin said. "It was truly a global hub for bartenders. I met some of my best friends there, and stretched the evenings into dawn with some of the best humans I’d ever met."

The arrival of COVID-19 changed everything.

"It went down for a ton of people," he said, "the world turned upside down. I’d found the end of a marriage, our livelihoods were on hold indefinitely, and my dad needed help navigating the symptoms of early-onset Alzheimer’s. The pandemic really distilled what I needed to do and where my attention was really needed. I came home."

The perks of being here are extensive.

"Do you know how nice it is being able to see farther than the next block? I work next to a body of water that is also an airport, and on a clear day, I can see all the way from the Cascade mountain range to the Olympics. It’s great for social distancing."

He adds that a change of scenery was so necessary for his own mental health.

"It was an option that a lot of people just didn't have," he said. "I was fortunate enough to have the opportunity to come home during a global pandemic and take care of my loved ones in any way I could."

When it comes to Agustin's connection to his Filipino heritage, that's constantly evolving.

"I’m what a lot of Filipinos call 'Bad Filipinos,'" he said. "I don’t speak Ilocano (my Mom is from Santa Maria, Ilocos Sur), I don’t speak Tagalog (my Grandmother’s from Manila), and I was raised in a white suburb. So, I’m learning how to be Filipino and probably will never stop. In my case, I’d been learning typical Filipino values and identity through my parents and grandparents."

He says it is too easy to sum up the culture by saying that Filipinos have huge families, a big emphasis on food, and everyone is your “auntie” or “uncle.”

"Being raised out here, I was taught survival meant assimilating and focusing on individualistic traits, like striking out on your own, self-determination, that sort of thing," he said. "But as I get older and the world changes, I’m finding myself leaning on the more Filipino collectivist values I was raised in but taught to eschew, like working together to support extended family, going to enormous lengths to provide comfort for our elderly and finding joy in the face of uncertainty."

Agustin's favorite parts of his culture? "Right after, 'Take off your shoes,' Filipino hospitality is defined in four words: 'Did you eat yet?'"

The ways in which he's honoring his upbringing in cocktail creations are "rather sneaky." He snuck in galangal — a sharp, spicier cousin of ginger— into the Evergreen Buck. The Meany Ski Hut is a spin on Phil’s (Ward, Death & Co) Cooper Union, using American malt whiskey and a Coconut Water-Rock Sugar syrup. There’s a single drop of jasmine essence scenting the foraged wildflowers on top of the Palm Springs of Washington.

"The ingredients on this menu that mean something to me are assimilated into the modern classic structure in ways that are, in every case, bittersweet," he said.

"Did you know that some of the best bartenders in the world were Filipinos?" Agustin said. "You’d never know it, because very few records were kept of the mostly Filipino bar teams on which famous tiki bars like Trader Vic’s were built. The proprietary mixes, the infusions, the execution were all entrusted to groups of Filipinos who were viewed as migrant workers."

He says if you look closely at nearly any Filipino dish, it's composed of elements with so many different preparations, you’d easily use every pot and pan in your house.

"You gotta use a million different techniques to get the variety of flavor and texture that characterizes Filipino cuisine," he said. "So we don't blink at getting to do a two-week maceration for a fragrant bay leaf tincture, because we are patient. We’re not put upon when juicing 24 pounds of strawberries, because we know how happy half an ounce of the dense and tangy syrup makes people. This is just a normal Tuesday."

For cocktail creations, for which they've more than doubled the menu size, Agustin admits to being "a sucker for Spectacle with a capital ‘S’. I get such a kick out of the Cherry Bomb [a smokeless sparkler-adorned gem], and watching people’s faces light up," he said. "It’s stupid fun. I can’t get enough of it."

"We make a giant Long Island Iced Tea, put all the booze in a keg, carbonate it, and serve it on draft. Instead of cola, we drop in a slug of this intensely floral and juicy Whidbey Island Blackberry Liqueur, which I don’t know why more people don’t know this, but it’s the most highly rated spirit of any kind ever produced in North America. And nobody talks about it! It’s made in our backyard! Then, since we’re at the tail end of the tiny Pacific trailing blackberry season, our forager Matt Nevitt [yes we have a forager] literally goes into the mountains and brings back wild Salal berries to garnish the Whidbey Island with. He also picks us wildflowers."

A section on the menu called “Avalanches” means boozy frozen mojitos and fruity frozen brambles served on the rooftop all night-long. Thankfully, Jenna Rosenbloom, who just moved up from New Orleans, happens to be a slushie machine expert.

Agustin's preferred part of this workplace? "Well for one, the view from the office doesn’t get old," he said. "But for me, it’s the amount of support devoted to the creative and interpretive artists on my team. If you really believe in a concept and we think it’s physically possible at scale, everyone’s skill sets and experience get leveraged into it. Everyone on my team is an expert in something."

"I suppose my favorite part of all this is that in a lot of instances, there have been times in the past where I might have said to my team, 'I think this recipe is fire, but we can’t put this drink on the menu because the production process takes too much time', or, 'I’m in love with this cocktail, but we can’t serve this drink because the preparation is too involved' — and that at every juncture, they’ve found ways to prove me wrong."