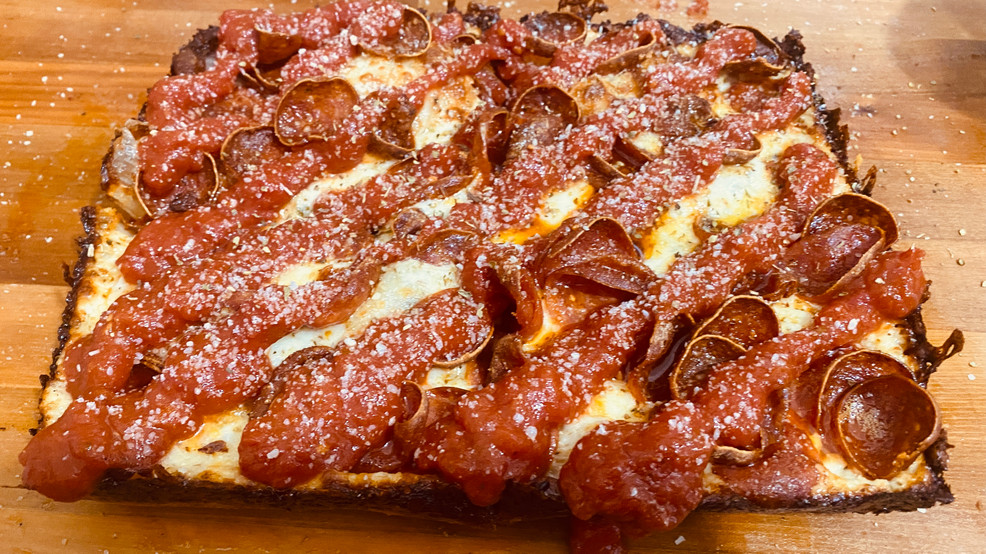 At some point in our lives, we've all considered going on a quest for the world's best pizza. While it's never a bad idea to visit the pizzerias of New York, Chicago, or Italy, your quest only requires one-stop now, to Moto Pizza in West Seattle, serving up Detroit-style pizza from an unassuming but whimsical location.

Lee Kindell and Nancy Gambin traveled the world over in search of what made the best pizza. It took six years of development, but Kindell and Gambin perfected their vision and opened Moto Pizza in February 2021. Each ingredient is thoughtfully sourced and then perfected, but Kindell's overall goal with Moto is more just high-quality ingredients to make great food. Moto is also about cultivating a positive feeling.

"My favorite thing is to share [is] love, hope, and pizza," he said. "My food is truly an expression of my travels and who I am."

Making each pizza by hand takes time, and Kindell and Gambin are keeping production to a manageable level, serving up between 120 and 150 pizzas each night.

"I'm so mindful about what I'm doing to each pizza that I don't want to go into this super machine production," Kindell said. "I want to be creative and artistic."

Moto Pizza's menu currently has five pizzas in the lineup, with the most popular being the Pig. With Philipino pork belly that takes over a day to make, this pizza also features calamansi (Philippine lime) chimichurri sauce, onions, sliced pork sausage and Kindell's homemade Mr. Pig sauce.

Soft-serve ice cream comes in eight rotating flavors, including butter pecan, mint, and pina colada. In another ode to the magic of dough, Moto's ice cream is served in a Moto Pipe Cone that comes from a Transylvanian recipe that dates back to 1782.

But there's another star on the team that makes Moto Pizza's so delicious. The business wouldn't exist without the help of Betty, a 100-year-old sourdough starter. Gambin hand makes all the dough each day, lets it rest at the ideal temperature and then bakes it at its prime — typically three to five days later. He said his arms are always sore these days from the kneading, but it's worth the extra effort.

"Hand mixing the dough creates a beautiful gluten structure that's different from what a machine does," he said. "It's a lot of work, but the dough is where the magic happens."

The backyard space of Moto will soon be sprouting some of the vegetables and herbs used on the pizzas. Gambin is transporting a bee box from his home to Moto's backyard for harvesting honey for the ice cream and the hot pepper-infused honey on the "Kissd" pizza. Any food scraps head for the composter in the yard, too.

Moto Pizza sells out quickly, and you may have to book a pickup slot for a few weeks out. But Kindell was willing to share an insider tip: he usually has about 20 extra dough balls each day that he's happy to turn into a Detroit-style pizza of perfection for some lucky customers. If you're in the mood for an incredible pizza but weren't able to book in advance, head to Moto's front yard at 4 p.m. sharp. By 4:30, Kindell says they're all spoken for.

Adding joy to people's lives is something Kindell hopes to do with Moto Pizza, and the additional 4 p.m. offering is a way to fulfill this desire.

"I just love that interaction and seeing people are excited right when we open up the door," he said. "It creates this really beautiful thing, and I'm so stoked to do that."

Moto Pizza is located at 4526 42nd Ave SW in West Seattle. Order for takeout through Moto's website with pickup slots available between 4 p.m. until 9 p.m. Wednesday through Saturday.