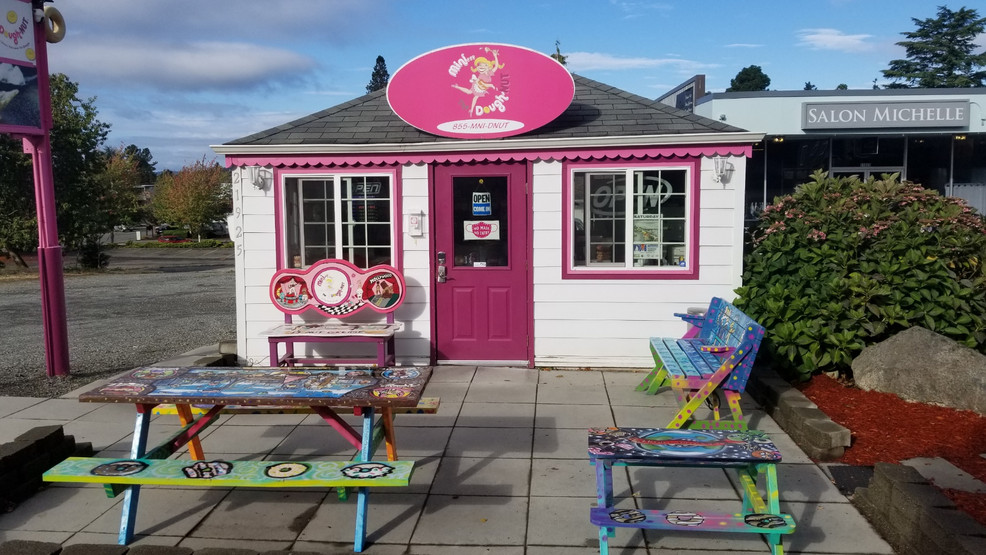 Demone Gore, 47, a Rainier Beach High School and University of Washington grad, opened the store seven years ago, around the time his daughter was born.

"I am a former actor, and a lot of my work required auditions, so I had a lot of menial jobs in between gigs," he said.

As his family grew, he knew he needed to make a more consistent living.

"This was a case of having an idea for the name of a business and then working out the specifics," he said.

At his shop, the donut is merely the strata for customer creativity. You can purchase a half dozen (or more) and then choose one of the flavors concocted by Gore — like the Donut E. Presley, a peanut butter and banana-chip topping — or make up their own topping creation. On a recent visit, we tried cream cheese and strawberry, as well as a more mundane version: cinnamon sugar. Other toppings include bacon, crushed cookies, various candies, caramel and hot fudge.

The donuts are made fresh, often before your very eyes, so that they never get old or stale. It's mesmerizing to watch the machine's arm flip the small rounds of dough and shuttle them to the end of the hot oil bath.

Gore says that a lot of the mini donuts he'd seen came from mom-and-pop shops.

"I wanted to create something that would eventually be franchisable," he said. "That's still years away. I'm sticking with what I have now. I'm not there yet. I'm still learning."

While there aren't seasonal offerings, there will be one coming up for this holiday season — Donut Be Eggin' My Noggin, which will feature an egg nog flavored glaze. Keeping regular flavors and not venturing into an ever-rotating menu is in part due to the fact that the shop is family-run. Trying a new flavor out at home, ensuring it is something that is both shelf-stable and tasty, is labor-intensive for a family with a school-aged daughter (currently home-schooled) and aging parents.

That said, being the daughter of parents who own a donut shop is a pretty cool thing.

"She's pretty thrilled with donuts. I take her to work occasionally, and she always wants some," he said. "But if we go to a party and there are donuts and other pastries, the other pastry wins."

Personally, Gore likes the Donut Judge Me Bro, a concoction of hot fudge, chocolate and Nutella. He enjoys coming up with punny names. He thought up Donut Be Mad Bro as a flavor that could be spicy. He made it a fudge-topped donut sprinkled with cocoa and cayenne.

He is also building on an online store that will feature all things donut. If you go into the shop, you'll see a selection of donut-themed items that are likely to populate the site. Think donut toys and donut-themed clothing.

While he has lots of plans, for now, Gore is content coming up with flavors associated with every pun he can think of. But he really doesn't want people to rely on his flavors only.

"I'm big on people coming up with their own creations," he said. "I want it to be like a pizza you customize and put on what you want."

Mini The Dough-Nut is open Wednesday through Sunday, from 9 a.m. to 5 p.m. They also do catering and parties.