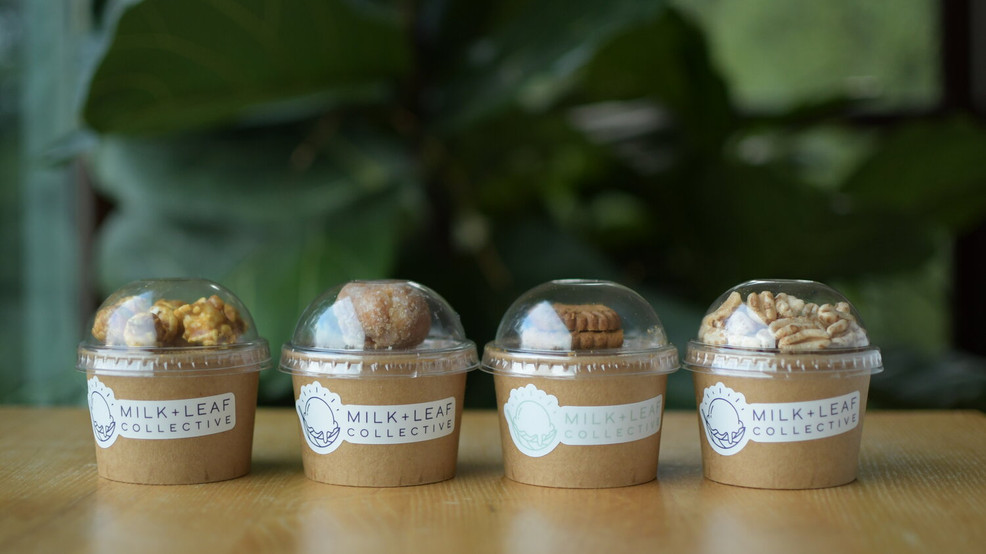 Seattle is synonymous with coffee. We live and breathe by the roasted beans, using it as a social glue to meet and catch up with friends. But Harrison Davis has a better idea. The genius behind Milk & Leaf, Davis prefers to meet up with friends and family over a bowl of ice cream. He’s taken this incredible idea and combined it with another social experience: sipping tea. Enter the Milk & Leaf lineup of tea-infused ice cream that we’ll be enjoying all summer.

Davis has never been sold on coffee and didn’t get into tea until later in life, but his love of ice cream started at a young age. Growing up in Oregon, he remembers bonding with his family over bowls of Tillamook ice cream, and as he grew up, he started catching up with friends over tea.

“Ice cream was always something my family would talk over,” he said. “It kind of felt like my tea growing up but instead we would go to ice cream shops to catch up. I just love those two social foods, so I thought I’ll bring them together.”

Milk & Leaf has two popups per month where Davis brings a lineup of four tea-infused ice cream flavors. One option will always be vegan, one is a new flavor, and one flavor comes from the popular vote on Milk & Leaf’s Instagram page.

So far Davis’ favorite flavor is Smacks Cereal. The ice cream base is genmaicha, a Japanese brown rice green tea. Milk & Leaf then tops it with puffed wheat which gives the whole experience one similar to eating a delicious bowl of Honey Smacks cereal.

The standout fan favorite has been Popcorn Oolong - a milk oolong (jin xuan) tea ice cream with a caramel popcorn topping. But we also really need to talk about the Chaice Cream which is masala chai ice cream with a topping of vanilla wafer cookies.

It would also be unfair to not mention Earl's Gone Vegan - a vegan earl-grey infused ice cream topped with a Biscoff cookie. We’re just not sure that cookies n cream can cut it after trying Milk & Leaf’s ice cream and cookie combos.

The phenomenal flavor pairs are thanks to Davis’ distinct research and development process.

“I usually drink tea at home and have this snack along with it,” he said. “I think, ‘this will work great!’ and then I'll try it as an ice cream and adjust accordingly. It’s not a very exact process.”

But Davis is not alone with developing tea-infused ice cream for Milk & Leaf. His family chimes in with recommendations and even has an Amazon wish list for toppings they hope to see used soon and their recommendations for flavor combos.

“We're all really close and we talk constantly,” Davis said. “When I'm coming up with a new flavor, they're always aware of it.”

Before the pandemic halted international travel, Davis went on a research trip to Japan, China, and India to learn more about the teas he was using for Milk & Leaf. His knowledge of tea and its flavor profiles is evident in the incredible ice cream flavors he’s able to make.

“I can now better understand the nuances of flavors, how I want to use them and how they might work,” Davis said. "It was an unbelievable experience, and I have so much gratitude for the extremely welcoming people in the tea world who I met along the way."

While we might not have the tea knowledge David has, we do know good ice cream when we taste it, and this is excellent ice cream.

Visit Milk & Leaf at its monthly popup at Distant Worlds Coffee on the third Sunday of each month in Roosevelt. Check out the current menu on Milk & Leaf’s website for pre-ordering and a calendar of where else to find the tea-infused ice cream each month. Each pop-up’s ordering goes live about one week prior, but a few walk-ins are available at each pop-up.