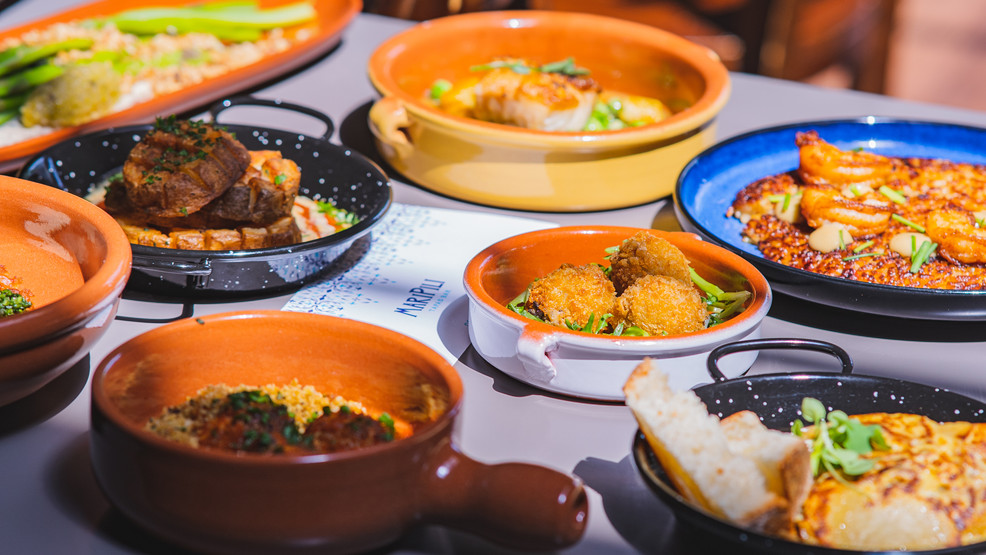 Grayson Corrales honed her craft in some of Seattle's top kitchens, but her approach to food has always been firmly rooted in family.

"My grandmother is the person who taught me how to cook," said Corrales, chef/owner of MariPili Tapas Bar. "Food was always so integral at (my grandparent's) house. Making sure that everyone was fed was number one. Not only that, but fed well and making sure there was a sense of community at the table was always really important to them."

So it only makes sense that Corrales' debut restaurant, MariPili Tapas Bar in Capitol Hill, celebrates her grandmother's impact on her cooking.

"My grandmother as a cook was always very meticulous and perfectionistic. I learned a lot from her in the sense of you can't cut corners, you can't make it go faster, you have to do each step in the right order and each step needs to be performed correctly and with care," explained Corrales. "That's something that I think is absolutely invaluable in my cooking that my grandmother instilled in me."

The restaurant is also a chance for Corrales to showcase the flavors of Galicia, the region in Spain where her grandmother was born and raised.

"Galician cuisine is Spanish cuisine, but some of the dishes that are most common in Galicia feature their incredibly fresh seafood and a little bit of cooler climate vegetables. That's another reason I was so excited about focusing on Galician cuisine, because we can draw so many parallels from the Pacific Northwest to the Atlantic northwest in Spain," said Corrales.

"One of the signature plates in Galician cuisine is Pulpo a la Gallega. It's really straightforward, but I think that's another hallmark of Galician cuisine. It's simple, it's peasant food, but it's always nutritious, warming and delicious," explained Corrales.

"Pulpo a la Gallega is boiled octopus. It's boiled with an onion and you serve it over boiled potatoes in chunks that are almost falling apart, a drizzle of beautiful olive oil and hot and sweet paprika over the top. We've kind of taken that dish apart and put it back together again."

Corrales' version of Pulpo a la Gallega features octopus, poached in orange and sliced, served with crispy potatoes, Spanish chili crisp and pickled onions. It's emblematic of the menu at MariPili, which is designed, as you might expect, around tapas.

Corrales tells me, in Spain, tapas are small dishes served specifically to be paired with wine and beer. At MariPili, the term 'tapas' refers to small plates (and a few entree-sized dishes) meant to be shared.

"We really encourage two, three, four, six, eight people to come in, order a variety of tapas and share absolutely everything. Most of our tapas are designed in a way where you can eat directly off the plate," explained Corrales. "We're really just trying to create a social setting where people can meet and enjoy themselves and the food they're sharing with other people."

Before opening MariPili, Corrales traveled to Spain, interning at Culler de Pau, the only 2 Michelin star restaurant in Galicia. She planned the entire Seattle concept, which is located in the former home of Cafe Presse, in her dorm room at the Spanish restaurant and collected most of the decor that now adorns the walls in duffel bags.

"It's really emotional for me, actually," said Corrales. "Seeing everything I collected over months have a home in this space, it's been really cool to see. I'm so grateful for my husband and my staff in helping me put all of this together in the way it needs to be because it's a dream."

That dream is now a reality. When guests step inside MariPili, Corrales' hope is they experience not just the flavors of Galicia, but also the joy of gathering around the table, just like her family did back at her grandparents' house.

"It means so much to me to be able to share some of my identity, my personal experience and the things my grandmother and my parents have shared with me my entire life," said Corrales.

"I think what's so cool about this space and the concept we've created here is that there's so much to taste and see and learn here, but in a really fun and inviting way."