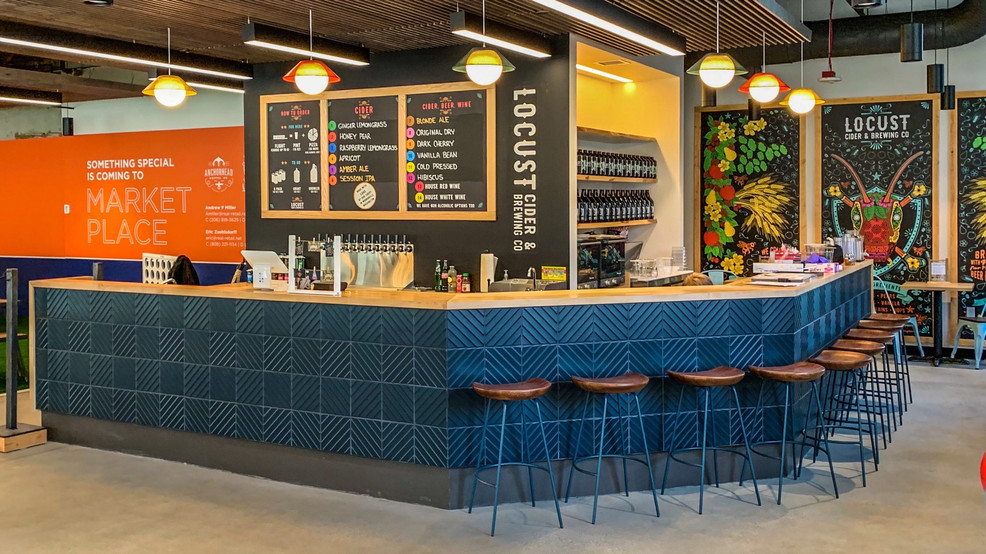 Family-owned Locust Cider grows from one garage to 16 taprooms

Washington-based Locust Cider is known for its bold, unique flavors — and for having more taprooms than any other cidery in the country. The brand currently has 16 venues in three states, where they use only natural ingredients to create delicious ciders, following unusual themes like Vanilla Bean, Honey Pear, Blackberry, plus rotating seasonal favorites like Chai and Dark Maple.

The family-owned company is headquartered in Gig Harbor; brothers Jason and Patrick Spears started Locust Cider out of Jason’s garage in 2015. Today, they have taprooms in Washington (Alki, Ballard, First Hill, Gig Harbor, Market Place, Olympia, Post Alley, Redmond, Spokane, Tacoma, Vancouver, Walla Walla and Woodinville, whew!); in Colorado (Fort Collins and Belmar); and in Fort Worth, Texas. With just under 100,000 cases a year, they're still considered a small-batch producer, yet their loyal fans have quickly helped build a strong community.

"I had been having a harder and harder time drinking beer," explains co-founder Jason Spears, "and came to realize I have an allergic reaction to hops. I learned about cider at a dinner with friends, tried one, and was immediately hooked." Dupont Reserve, still one of his favorites, is what hooked him.

As timing would have it, he was not happy with his work at the time and looking for a positive change, "So naturally I went all in with cider, learned how to make it by reading books and ultimately seeking out and learning from some of the best."

They found their initial space in Woodinville, "We didn't even have good cider recipes worked out the day I signed the lease, but it all came together by May 2015."

Spears said he originally intended a simple, fun and easy-to-run cider company, with him doing most of the hands-on cidermaking. But life took an unexpected twist, "My daughter Lucy was born just weeks before we started construction and was diagnosed with a brain condition, Hydrocephalus," he says. "She subsequently spent most of our first year as a company in the hospital. That meant I had to hire more people than planned to do the work so I could spend time with my family. More people means more money, which forced us to try to grow faster."

Since then, they've evolved in many ways, but Spears thinks the biggest way is in quality, "We are always learning, but the flavors and quality of our ciders is better now than it has ever been, and the quality of our customer experience in our taprooms is better than ever."

Starting a business with family — especially in light of his daughter's health issues — was extremely challenging. But then...

"But then, of course, 2020... Managing this company through COVID was, by far, the hardest business challenge I have ever faced," Spears said. "And that doesn't mean just hard business decisions, it means daily personal challenges, facing the prospect of the business going under and losing everything, laying off 90% of our staff, including friends, and never knowing what would happen next."

The timing made it extra difficult, too, since in early 2020, they had just opened a majority of the taprooms, "We had spent a lot of money and time, then the rug was pulled out. Fast," Spears says. "Getting through that was really, really hard. But now, being here on the other side (with a lot of scars), as a group of people who went through it all together, is extremely rewarding. I try to remind the team every time we meet, about what we've been through together. Doing something really hard with a great group of people is a special opportunity, and in the end can be very rewarding."

Spears considers having the country's most cider taprooms an amazing opportunity to reach so many people one on one, "It's because of our taprooms that we can share our passion for our ciders, or win someone over as a new cider drinker (my favorite!), or teach them about our cause, Hydrocephalus. These personal connections are what make the business meaningful to me."

Spears says what's coming next is "the BEST!" Now they're focusing on getting better. In partnership with the American Cider Association, they have nearly half of the company signed up to become certified cider professionals, and they're working on having more "Pommeliers" ( the cider equivalent of a sommelier) than any other company in the country. "And building on that, we want to be the leading source of cider knowledge and learning available, for our customers," he says. "So we're super focused on taking our people and cider and the taproom experience to a much higher level."

What makes Locust's ciders special? First, they say, it's the dynamic flavors and ingredient choices.

"Of course, things like Vanilla Bean and Dark Maple are good examples, but even our traditional style ciders will be bold in flavor."

Second, they believe their taprooms enable more exploration, thanks to daring cider-drinking customers who are ready to try new things, "So we can try unique apple blends or single varietals, barrel aging and crazy modern flavors (smoked blueberry!!!) without worrying about how the market will accept them."

Spears's personal favorite is constantly changing. "Right now, Blackberry is a perfect everyday cider for me, but I'm REALLY excited about our Juicy Peachd, which launches later this year in cans and just won a double gold medal from Sip Magazine," he shares.

Using PNW ingredients feels like a no-brainer for the brothers.

"Washington grows the most apples in the U.S.," Spears says, "and the agricultural heritage here is deep. We would (and occasionally do) source things from elsewhere if the PNW wasn't the best at it. But to be honest, I doubt I would have started this company if I was living somewhere else; I think being close to the fruit is a pre-requisite."

Spears says that, on a personal level, their cause is very special to him. "We raise thousands of dollars every year for the Hydrocephalus Association because of my daughter who was born with it. I'm not asking anyone to make a donation, I just want to teach people about the condition so it will over time get the mindshare it deserves, to help find a cure and better treatments."

The brothers also love challenging non-cider drinkers to visit a taproom so they can be converted. They feel lucky to have some great bar and restaurant partners in the Seattle area, and you can find select Locust flavors at Safeway, QFC, Costco, PCC and Trader Joes, too.