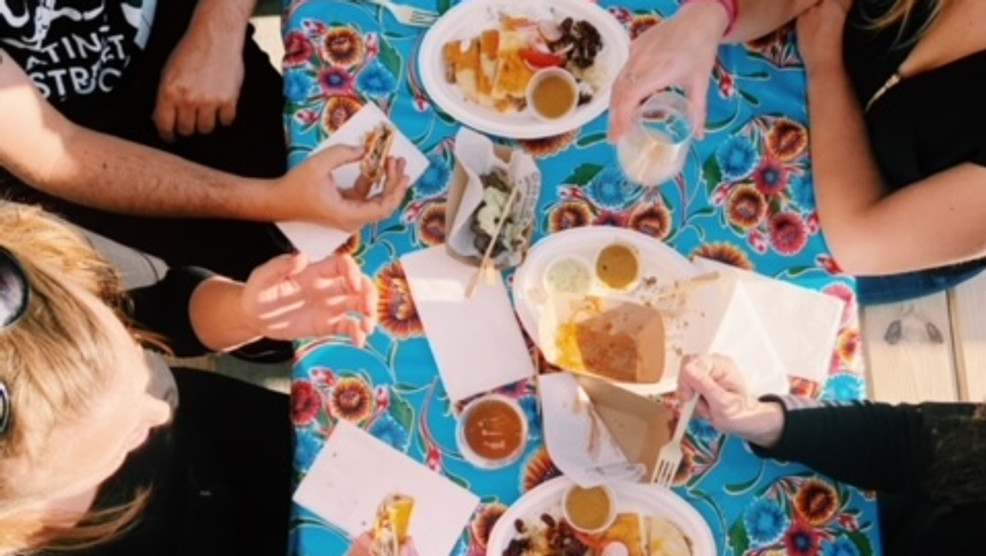 Food for Party People: Garzón is a taste of a night out in Buenos Aires

“We make food for party people,” says José Garzón, chef and owner of the Latinx street food pop-up, eponymously named Garzón. Popping up at breweries and distilleries all over the greater Seattle area, Garzón is a taste of a night out in Buenos Aires or Medellín. A playlist of dance hits from reggaetón to Earth, Wind & Fire accompanies a menu of delicious street food from twice-fried plantains to Columbian street dogs, to pinchos—or grilled meat skewers.

Hailing from Guayaquil, Ecuador, José left home and spent years as a traveling musician, which took him all around South America, and eventually to the United States. Touring also exposed the future chef to dishes and cuisines from all around the world, especially street foods and late-night eats, like Argentinian pizza.

Touring is also what brought him to the Pacific Northwest as the guitarist for Bremerton band, MXPX. In his downtime between tours, José took up kitchen jobs, flexible work that he could pick up in the interim, although eventually, he fell so in love with the kitchen that he attended culinary school and made cooking his career. With stints in fine dining across the city, including The Barking Frog, he started to realize that tweezers and tasting menus weren’t his calling, but also never thought street food would be taken seriously. After attending a local James Beard Taste America event, he met fellow Seattle chef Melissa Miranda, who was doing a pop-up for what would become Musang, and opened his eyes to what pop-ups could be.

He and co-founder Stefanie Hieber then launched Garzón with only a rice cooker and a crockpot, months before the pandemic when many out-of-work chefs would also turn to pop-ups. He began in Everett at Scuttlebutt Brewing, realizing how his street food was the perfect complement to breweries that don’t tend to have full kitchens or robust food options. He then did pop-ups at the former East Trading Company taking over the kitchen after 8 p.m. until the bar closed at 2 a.m. to provide late night-goers with food. A hallmark of his pop-ups, aside from the killer music, is the decor— colorful floral table cloths line tables at the venue, and to-go silverware is served out of repurposed Café Bustelo cans.

“In South America, you eat before and after you drink, this is food for after,” says Garzón. Ekéko’s menu includes a hamburger made with pork chorizo and Argentinian milenesa sandwiches—the kinds of fried, fast foods that people the world over crave when out drinking.

At first, he said, some customers didn’t understand Latinx street food, especially since Seattle doesn’t have many venues dedicated to it.

“Being a POC business owner is already hard, let alone with food people have never had,” says Garzón. “But you explain that it’s basically rice, beans, and pork chops, and everyone loves that.”

Today you’ll find the Garzón pop-up on Saturdays at The Growler Guys in Lake City and Ekéko on Thursdays at Fair Isle Brewing in Ballard. But like many pop-ups in the city, Garzón is making moves towards a brick and mortar, hoping that the creative passion projects that kitchenless chefs like himself have built will become permanent game-changers in the Seattle restaurant scene.