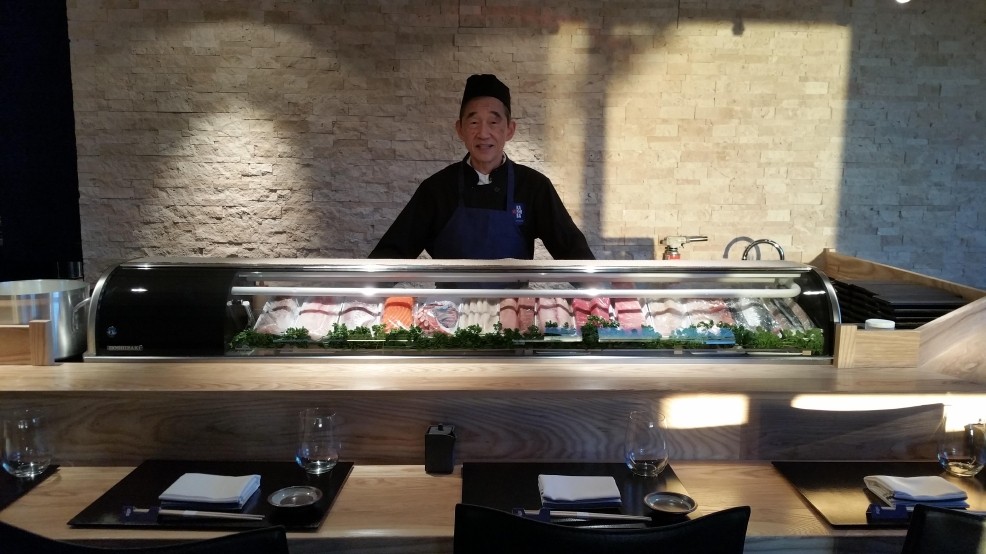 Seattle Refined: What inspired you to come out of retirement and open a new restaurant?

Shiro Kashiba: I retired once before, before I opened Shiro's, for two-and-a-half years. The first year I really enjoyed, but the other year and a half? Really boring. I was tired of it. I like to serve sushi. It's much more comfortable than retirement.

Why open in Pike Place Market?

I was looking for space in the Downtown area, and, fortunately, some of my customers introduced me to this space. Then I met the landlordthe owner of the Inn [at the Market, where Sushi Kashiba is located]. He had been my customer a long time ago at Nikko [Kashiba's restaurant prior to Shiro's, which he sold in 1992]! So they were happy to have me here.

What's your favorite part about being in Pike Place?

There is always activity around. Sushi has to have movement. It's very important.

What is the difference between opening a sushi restaurant in 1994 and opening one in 2015?

Most of the customers are the same. I think sushi lovers have increased, because of fusion style sushi. Everybody starts with that sushi. Then everybody likes to have real sushi. I think times are changing, real Japanese sushi is getting more and more popular.

How do you think Jiro Dreams of Sushi, the movie, was a part of that change?

That made a big difference for sushi. It was very big. And actually, I worked with Jiro in Japan. So I really am lucky. It was the same thing as the movie: the eggs, turning them over, how you make the eggsI did almost the same thing.

What is your favorite type of sushi?

Oh, I like geoduck and local spot prawns. The local things.

What's the most important thing you do every day?

Preparation is the most important, and the shopping. We don't buy a huge amount at a time, but every day we need fresh fish, we have to find it. We don't have a market like Tsukiji [Tokyo's fish market] here, we don't have anything similar. So we have to be looking for distributors. Then we pick good local fish. Still we have to import so many things, from Japan, from the east coast, from Florida. All over. Mackerel from Norway. All over the world.

Why is so much of the menu omakase (chef's choice/tasting menu)?

Customers don't know exactly what each fish is, it takes time to take an order, and not everybody can explain it exactly the right way. I think with omakase, we can take care of it ourselves. That's why omakase is a very good way to treat yourself somewhere.

Does everyone get the same menu in a night?

At the sushi bar, we always ask if you can't eat something or allergy, and if so we eliminate it. But then we do other good stuff. There are still lots of customers who like to challenge themselves, to try new seafood. I really like to serve them. People who have never had a sea urchin. When they sit at the sushi counter, I try to introduce new things to the customer.

What besides sea urchin are interesting to introduce people to?

Geoduck. Especially in this location: there are lots of visitors from other states, other countries, they've never seen geoduck. Of course, we serve the geoduck still moving. They're very excited that we serve them live, moving geoduck. I'm excited too, to serve those customers, to make them happy!

What would you want to tell people in Seattle who haven't been in yet about your restaurant?

There are more than 100 sushi restaurants in Seattle, but only maybe less then 10% of Japanese restaurants serve real, traditional sushi. I like to show how fresh seafood is, clean and tasty. There's still so many people that are scared of raw fish. But at my place, I think most of the customers change their opinion, are very happy. And next time, those customers take their friends and introduce them to sushi.

Are there things people do at the counter that you wish they wouldn't do?

There is a kind of a manner, a custom at the sushi counter. And new customers, they don't always appreciate that the food and the culture is completely different than French restaurants. I always explain, right away and easiest way and tastiest way. So then they try that. If I go to a French restaurant, I don't know how to order, I don't know how to eat. I don't know the manner. So we have to give just a little information, helps the customer to get comfortable.

What would you tell someone who asked what's the most polite way to eat sushi?

They may use chopsticks, or even fingers are a good way to eat sushi. Most of the customers don't know how much salt and sugar we put in the sushi rice already. We serve soy on the side of the set, and the customer pours the soy sauce into the small dish and they dip and they put too much. So I give them warningwe put lots of salt in the rice. We make a nigiri sauce, then we brush it on it. The customer, we tell them not to use the soy sauce. That is the kind of thing I explain before they eat. Otherwise there is too much salt.

Anything else you want to tell people?

If you like sushi in the United States, then you have to visit Japan and have real sushi.