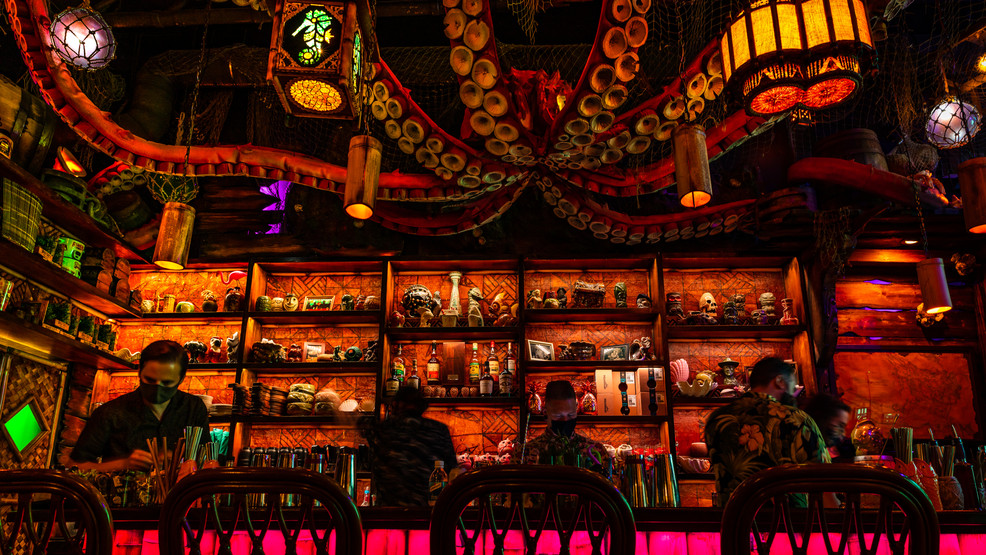 Ahoy! This Capitol Hill bar is the gateway to an underwater abyss

Inside Capitol Hill hotspot Rumba, a nondescript door is the gateway to an underwater abyss where a giant sea creature lurks hoping to lure you in with some seriously creative cocktails.

Rosenthal had his eyes on the Inside Passage space since he opened Rumba back in 2012. After finally securing the lease, he and his team spent more than a year turning it into a stunning undersea oasis.

"We took some inspiration from Don the Beachcomber, which was an original immersion bar that opened up in the 1930's in Los Angeles," said Rosenthal. "We wanted to create this Pacific Northwest, underwater, sunken ship, tropical bar with a crazy sea creature hanging above. That's what we went for."

"I just love sitting at the end of the bar and watching people step inside for the first time. Watching their eyes light up and look around the space. We've said it's not the best first date spot because you get here and you're looking around the entire time."

All the details in the decor may draw folks in, but the cocktails themselves are the real showstoppers.

"You give the Rumba team 15 months to come up with ten cocktails and they're just going to be over-the-top," said Rosenthal with a smile. "My favorite is probably the '62 Panorama Punch. It's actually served in glassware they sold at the 1962 Seattle World's Fair to tourists...and it's presented on a round menu/map they would give you at the top of the Space Needle."

While the Panorama Punch pays tribute to Seattle's history, Inside Passage's most popular cocktail is an homage to the Pacific Northwest's 'most famous' pirate.

"The One-Eyed Willy is kind of a tropical version of an old fashioned," explained Jen Akin, general manager of Inside Passage. "Also, Goonies fans, obviously a lot of people order it just because of the presentation and the name of it. If you're not familiar with Goonies, why? Everyone who lives up here has to be familiar with Goonies."

Made with a blend of rums, vanilla, banana, cinnamon, bitters and a hint of lime, the One-Eyed Willy is a carefully crafted, spirit forward cocktail presented with theatrical flair. It's served inside a treasure chest, complete with gold coins a key and, upon opening, plenty of spooky looking smoke (created by carefully placed dry ice).

It's no surprise, with its menu of signature Inside Passage cocktails and tropical favorites, scoring one of the 35 or so seats in this bar can be tough, but there is a secret to ensuring you snag a table.

And stepping through the Inside Passage, into Kiki's home, is a chance to enjoy a delicious drink while immersing yourself, even briefly, in a whole new world.

"I just want (our guests) to get away a little bit and be in a different place. Forget about your worries...and celebrate these cocktails that are coming out and enjoy them."