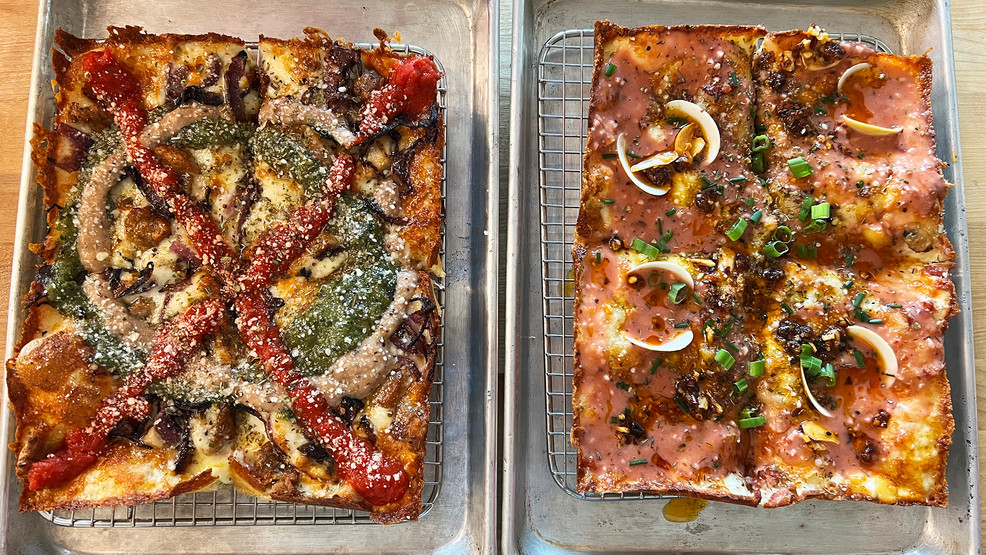 It looks like the house from the movie "Up." At first glance, out of place on a busy West Seattle block — but as it turns out, MOTO Pizza is exactly where it's supposed to be.

"We do craft pizza. A lot of people call it Detroit, but I like to call it 'odd pizza' because it's a mix of all of the pizza I've experienced in my lifetime," said Lee Kindell, co-owner of MOTO Pizza.

Kindell, a self-described enthusiastic pizza craftsman, makes one of the most sought-after pies in the area. MOTO's online pre-orders sell out literally months in advance.

"I think what makes my pizza special is it's really like no pizza you've ever had," said Kindell. "It takes you on a journey, is what I like to say. It tells a story."

For Kindell, the story of MOTO Pizza begins long before the restaurant opened. A passionate home pizza maker, he was experimenting with different varieties when he discovered Detroit-style.

"I had no idea was a Detroit pizza was. So, I was online, and I was like, 'What is Detroit pizza?' I became a little bit obsessed, and I finally [made] one, and I did it right, and I was blown away," said Kindell. "It had everything. I call it FATT: flavor, appearance, taste and texture. It hit on all of those. I was like, 'This is the pie I will spend the rest of my life mastering.'"

Kindell spent six years dialing in his take on the Detroit-style pizza, all the while running a traveler's hostel in Seattle with his wife, Nancy. Then, when COVID hit, they decided to sell the business and change course.

"I said, 'Hey, I have a great idea. Let's open a restaurant in the middle of a pandemic and start selling my pizza.' So, we just jumped off the cliff and went for it," said Kindell with a big smile. "It's been an amazing ride."

The pizza at MOTO bears many of the hallmarks of Detroit-style. It's cooked in a rectangular deep-dish pan, a mix of cheese, including traditional Wisconsin Brick, pushed all the way to the edges, so it gets cartelized and crispy. But, there's a reason Kindell calls it "Franken-style" pizza — there are distinct differences, starting with the dough itself, made almost entirely by hand using a hundred-year-old sourdough starter named Betty.

"This dough gets a lot of love," said Kindell. "I chop it, grind it, roll it, pan it, everything by hand as much as I can. That's where the love and the passion come from. And it ferments for three days. It just adds so much flavor. It becomes super light, super bubbly. Just loads of fun."

That dough provides the canvas for all manner of traditional and experimental flavor combinations.

"I try everything. I throw everything at the wall and see what sticks," said Kindell of how he develops his unique pizzas. "My number one seller, and that's a nod to my mother, a nod to my culture, is the Mr. Pig. It's a pork belly that's done Filipino-style [...] then I use a spicy sausage. I make my own sauce. It's a lime calamansi, which is a lime that's from the Philippines. It's really bitter and deep in flavor. I make my own chimichurri out of that [...] So, you have this crazy sweet, salt, acid going on. It's just a beautiful combination. So, that's kind of my pride and joy."

Another pizza he offers is the Clam Chowdah — chopped clams, smoked bacon and onions topped with clam chowder sauce and Kindell's black garlic chili oil crunch. That chili crunch packs a punch of flavor on just about anything, including, yes, housemade soft-serve ice cream.

If you're skeptical, well, so was Seattle Refined assistant editor Abby Luschei, so we asked her to do a taste test. I can confirm she happily finished the entire bowl (pro tip: soft serve is available every day, no online pre-order required, with eight rotating flavors available in a cup or housemade MOTO pipe cone).

Yes, at MOTO Pizza, the flavors can be, at times, unexpected — even odd — but somehow they just work. Maybe that's because Kindell does seemingly everything with a sense of joy. He's having fun doing what he loves. He's right where he's supposed to be.

"It's like a tidal wave of everything hitting us. I couldn't be happier. I found my niche," he said. "I found my magic and how to express that magic and how to share that love. It comes through the food, and that's what everybody gets."