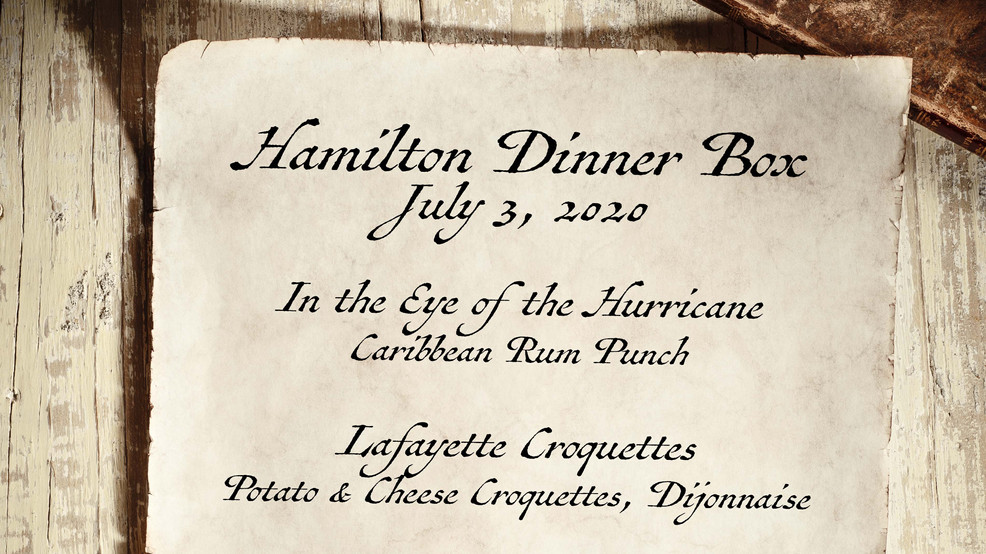 "Look around at how lucky we are," because the Broadway musical sensation "Hamilton" will finally be on the small screen this week!

If you've been living under a rock, "Hamilton" is a musical telling the story of politician and founding father Alexander Hamilton with music, lyrics and book by Lin-Manuel Miranda, who also played Hamilton in the original cast. Easily one of the hottest tickets in theater, this musical has one of the most insane and incredible soundtracks, probably ever? The musical won 11 Tony Awards and a Pulitzer Prize, among many other accolades.

Five years after it's debut, we are now being blessed with a movie — filmed in 2016 with the original cast performing the show in its entirety at the Richard Rodgers Theatre. "Hamilton" will be available on Disney+ Friday (July 3).

If you're planning to watch the movie Friday, elevate your viewing with a "Hamilton" Dinner Box from Tom Douglas Seattle Kitchen. Staff are big fans of the musical and decided to honor the movie's release with this fun, themed-dinner box!

"When I was playing congressman Samuel Chase in our high school rendition of the Broadway show '1776,' my job was to eat fried chicken (yes, he was a big man, and I was typecast) while on stage — all the while singing loudly in the chorus of the first continental congress," said Douglas. "To this day, I love the music, verse, dance and pomp of the genre. It's a dream to create a menu that reflects the grand occasion of 'Hamilton' coming to your home tv."

And talk about a perfect menu for this film! For $65, each box has a "four corsets dinner" for two and includes:

Preorders must be placed by 3 p.m. Wednesday (July 1), and boxes can be picked up between noon and 3 p.m. Friday (July 3) at Ballard Warehouse Kitchen (home to Serious TakeOut) - 5118 14th Avenue NW, Seattle.