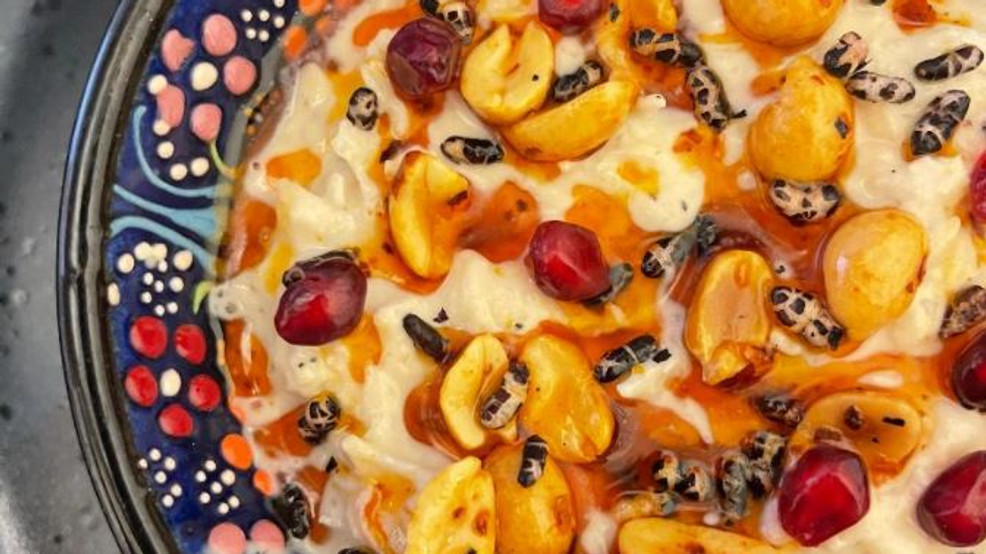 For some Turkish ex-pats living in Seattle, the quest to taste dishes reminiscent of their hometown lasted more than 25 years. That was, until Chef Berk Güldal and Katrina Schult rolled into town, bringing with them charcoal-grilled kebabs cooked on an open coal fire, along with their freshly baked lavash and other dishes representing different parts of Turkey. It's all on their pop-up menu at Hamdi.

Originally from Istanbul, Chef Güldal worked at one of the oldest Ottoman restaurants in Turkey before making his way to the U.S. to put in time at some culinary meccas, including Café Boulud and Eleven Madison Park in New York. After his stint on the East Coast, Chef Güldal headed west, where he was the sous chef at the 3 Michelin-starred SingleThread Farm Restaurant and Inn in Healdsburg, California.

Schult was also on the East to West Coast trajectory after leaving Lake George, NY for California. In Napa, Schult spent three years at the famed French Laundry before heading about an hour north to Healdsburg to be part of the opening team at SingleThread.

It's there where Güldal and Schult crossed paths. And it's there where the story of their Hamdi (named after the chef's beloved grandfather) pop-up begins.

"What inspired both of us on the culinary side is our love for great-tasting food with quality ingredients and being able to get creative with dishes," said Schult. "Of course, we both have a deep love for Turkish cuisine. Mine is more recent of a realization, with the simplicity of the flavors, the old-school cooking techniques, and the real ingredients that are gathered through Turkey."

While still living in California, Güldal and Schult visited Bainbridge Island this past March at the invitation of Grant Rico. He was a chef at SingleThread before taking the reins as Chef de Cuisine at Hitchcock Restaurant. While guest chefs at the Hitchcock pop-up, Güldal and Schult could feel they were on to something.

"At this first pop-up, we fed over 1,800 people in three days," Schult noted. "There was so much support and love for our food. We started to think of the possibilities."

Knowing there is a fairly large Turkish community around Puget Sound, they went back down to California and talked over the idea of moving up to Seattle and taking a chance. They started packing and moved to Seattle just three months after their pop-up on Bainbridge.

This was very good news for one repeat customer.

Semih Tareen is originally from Turkey but has been living in Seattle for 26 years.

"Almost all my experiences of Turkish food in Seattle and the U.S. has been poor or average," noted Tareen. "What I loved about my first and subsequent experiences at their pop-up was that the menu items were unique, diverse, and very tasty. You get to see the delicious kebabs cooked on a coal fire in front of you, and the fresh juices end up on the lavash bread."

Another plus for Tareen were the offerings by Hamdi that are rarely seen at other Turkish restaurants, let alone food trucks or pop-ups. Tareen points to "çli Köfte" as an example, a kind of deep-fried meatball made with bulgur wheat herbs and spices. Another was Kokoreç, a juicy sandwich made of lamb intestines and sweetbread mixed with herbs and spices.

"I was most happy to find a menu item that is my personal favorite Turkish fast food in Turkey, but that I had yet to see here," Tareen exclaimed. "To top all these off, they had a creamy hummus with their homemade chips, and a special ceviche dish made with a unique kind of a Turkish Salad called Gavurda Salata, made by finely chopping tomatoes, peppers, onions and so on."

Clearly, these dishes are inspired by Güldal's Turkish roots. One dish they have fallen in love with, and hope to someday offer, is the aged duck.

"I can guarantee that Berk's preparation and spices he uses for the duck is by far the best, and he is very excited to somehow fit that into the menu of our future restaurant," boasted Schult.

When pressed to name a favorite ingredient that they like to use on their dishes, Schult gives a nod to a sumac they found in a very small village named Vakifli in the Hatay Province of Turkey.

"The flavor is insane compared to other sumacs, and the combination of its bright, sour, and acidic taste really makes our dishes shine even more. It's crazy just one small change in ingredients makes such a difference."

To gain inspiration and source the sumac and other ingredients, Güldal and Schult took an extended trip to Turkey. Their overall goal for the trip was to help them both learn more so they could build a strong foundation for their pop-ups and for their future restaurant. Although Güldal grew up in Istanbul, this was Schult's first trip to Turkey.

"When we traveled Turkey, every new area we went there was something special to eat and we were constantly inspired by new flavors," recalled Schult. "I already had a love for the food after Berk and I met, and he showed me the flavors and techniques, and this trip intensified all the ideas and plans."

Güldal and Schult continue to work on their plans to open a brick-and-mortar restaurant in the future (they're eyeing you, Ballard). But in the meantime, diners can experience these ingredients, flavors and hospitality at the Hamdi pop-ups every Sunday through January at Fair Isle Brewing.

"If there is one thing we know well and one thing we want to portray, it is how important teamwork and family is," added Schult. "In the hospitality industry, it is like a big family, and truthfully we see our guests the same way, the regulars that keep coming back are part of the family as well, and we cannot wait to invite them into our restaurant one day and show them what we have been working so hard for."