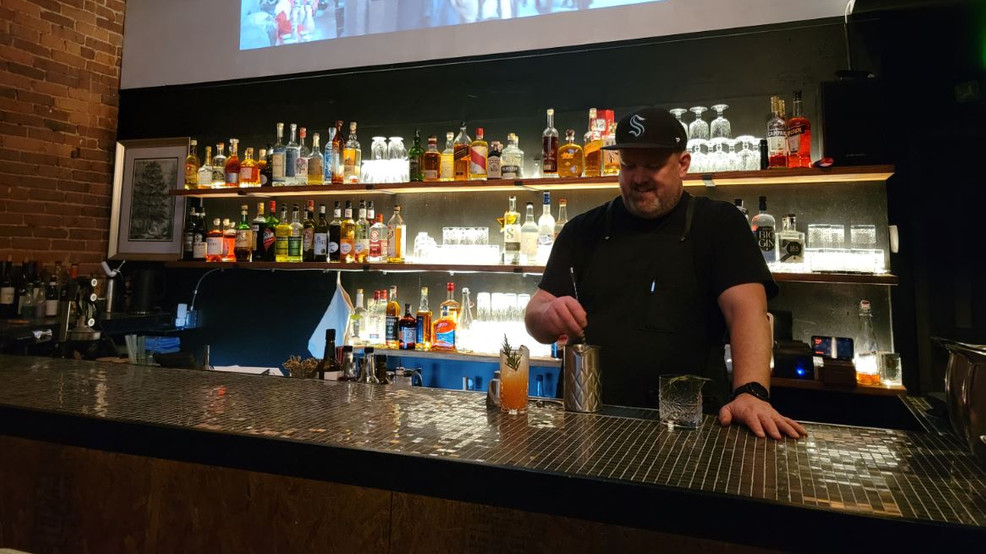 Ease up to Seattle speakeasy The Marble Room

Seattle is no stranger to speakeasies. They’ve been a hidden staple in these parts ever since Prohibition in the early 1900s. In fact, it could be argued that Pioneer Square was ground zero for Seattleites looking to lift their spirits when alcohol was outlawed.

Today, speakeasies in Seattle still flourish — with the added benefit of being legal. And if you know the right alley doorbell to ring, you can find yourself in a comfy, dimly lit cocktail den known as The Marble Room.

For nearly four years, D&E has amassed quite a following of hungry souls looking for a savory breakfast, fried chicken, freshly-shucked oysters, or other hearty Pacific Northwest fare.

Now, thanks to D&E owner Jonathan Fleming, you can tuck into the newly-appointed back-bar for some craft cocktails and moody conversations.

When we first chatted with Fleming, as he was in between completing tasks on his pre-opening punch list, we learned that he was rolling out a new bar program with cocktails that are more craft-oriented than D&E typically serves up front.

At the time, he hinted at the creation of a White Manhattan, with Westland Colere Single Malt Whiskey, Dolin White Vermouth, and a dash of orange bitters. Sign us up!

Fleming is mixing it up a bit with his food offerings, as well.

"The space seats about 30 and food is also available in the Marble Room," Fleming said at the time. "Although the menu will have a little crossover from the fare offered in the restaurant, you can expect new items exclusive to the space."

One thing that is exclusive to The Marble Room is its cocktail Omakase menu. Given the proliferation of artisan distillers in our region, the Omakase menu leans heavily on cocktails that show off the fine spirits being produced in the area. Put your palates in the skilled hands of the bartenders and chefs as three cocktails are coursed with three small plates, which also represent seasonal ingredients from the Pacific Northwest.

Small and intimate, The Marble Room can also accommodate large format dinners, if scheduled ahead of time. Groups of 8 to 14 guests can choose from several dinner menus, served family style, ranging from $50 to $85 per person.

Seasonality is the name of the game, so the Farmer’s Market Menu, which embodies the ‘best of the best’ of Seattle’s markets, is certainly on our recommendation list. A quick look at the sample menu suggests seared scallops with roasted fennel, citrus and Castelvetrano olives.

To add to the speakeasy ambiance, The Marble Room also has a couple of TV screens that flicker with black and white movies to enjoy in between sips of your Old Fashioned. There are plenty of gangster films from that era — perhaps the ghost of James Cagney will visit to help set the mood.

Access to The Marble Room is from the alleyway behind D&E, located at 314 2nd Ave S.

Jenise Silva is a freelance writer for Seattle Refined. Follow more of her work here.