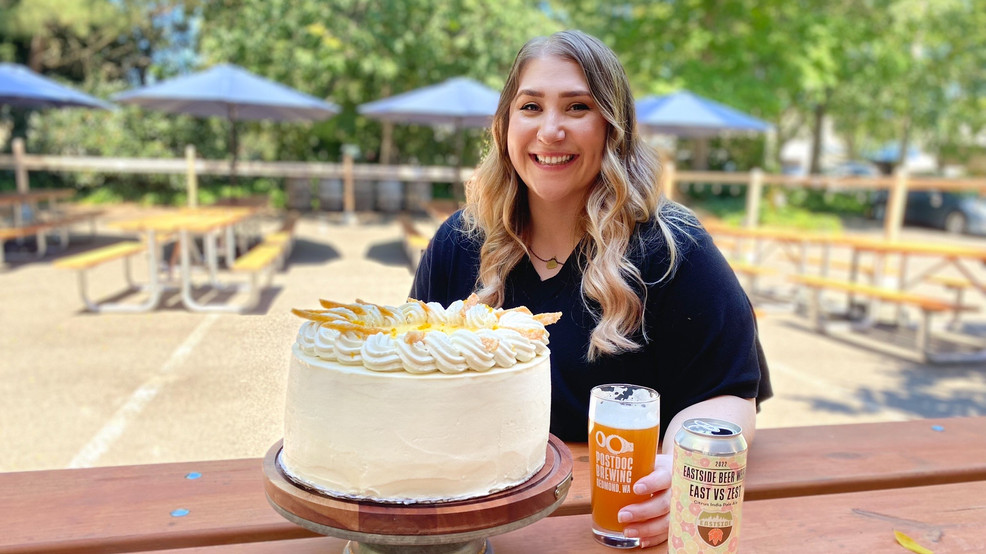 Jess Golka and her husband have counted the number of Washington state breweries they’ve been to together. The running total sits at 309. Golka is a big fan of craft beer. She also loves to bake. So Golka combined her two loves into a business called the Craft Beer Bakery.

Golka takes some of her favorite beers and infuses them into cakes, brownies, marshmallows and beyond. She attended culinary school 10 years ago, where the idea of pairing beer with sweet treats was born.

"We were told we needed to make marshmallows, and I said, 'OK, I’m gonna put beer in mine.'"

Her capstone culinary school project incorporated beer into every dish. Eventually, Golka launched Craft Beer Bakery. How does she work beer into her bakes? Thoughtfully, of course, with a pinch of experimentation and a few dashes of expertise.

"I go with whatever speaks to me and what I would want to eat myself," Golka said. "Some pairings take a little more to figure out the best way to incorporate the beer. Sometimes, it’s in the filling instead of the cake itself or a jam or a lemon curd. Those things can help me elevate the flavors that are already in the beer."

"That was the first recipe I developed, and it has the most beer in it," she said. "People are expecting it to be really heavy and dense and impossible to eat, but then they try it and realize the flavors are so balanced and they work really well together. It's a great breakfast cake, too."

If chocolate isn't your jam, go for the raspberry funfetti gose. A funfetti vanilla cake that features sour raspberry gose jam and a cream cheese frosting. If you’re feeling a bit tart, the IPA lemon bar could be the best match. And there’s always room for a Craft Beermallow toasted atop a dark beer or some hot chocolate.

Not a fan of cake at all? A rice crispy treat made with Beermallows will do the trick. One of the coolest parts of all the treats from Craft Beer Bakery is they’re safe for all ages and those who don’t drink. Golka said the alcohol content is removed during the baking process. So you’re safe to share these treats with humans of all ages.

Golka currently pops up at local breweries with her treats highlighting the resident beers or featuring a newly-released beer. She hopes to soon expand into weddings and celebrations to provide beers on tap and the cake to match. She’ll also bring another special treat to the event - cookie fries. These shortbread cookies appear as a french fry but are instead delicious late-night sweet treats that come with dipping sauces like a raspberry gose jam.

"The slightly sour dipping sauce with the sweetness of the shortbread cookie is a super nice pairing and it kind of makes you feel like you're eating ketchup with your french fries," she said.

There’s no easy path to scout out the perfect beer to incorporate into a cake, but Golka’s up to the task. In addition to baking, she works at a local brewery and said the community is a great place to hang out.

"I just love to find new places, even if I have to drive six hours out of my way," Golka said. "Sometimes I find this little gem that I never would have otherwise gone to and that's been really fun."

Craft Beer Bakery also takes custom orders if you have a favorite beer you’d like to compliment in a cake form. A recent pairing turned out to be one of Golka’s favorite cakes - a brown sugar Pop Tart base sits below a chocolate stout cake with cinnamon and brown sugar cream cheese frosting.

"Yeah, that one was life-changing," she said.

To experience the life-altering magic of beer in bakes, check the Craft Beer Bakery website for the upcoming pop-up schedule. Place an order for a whole cake on the website or get in touch about custom orders.