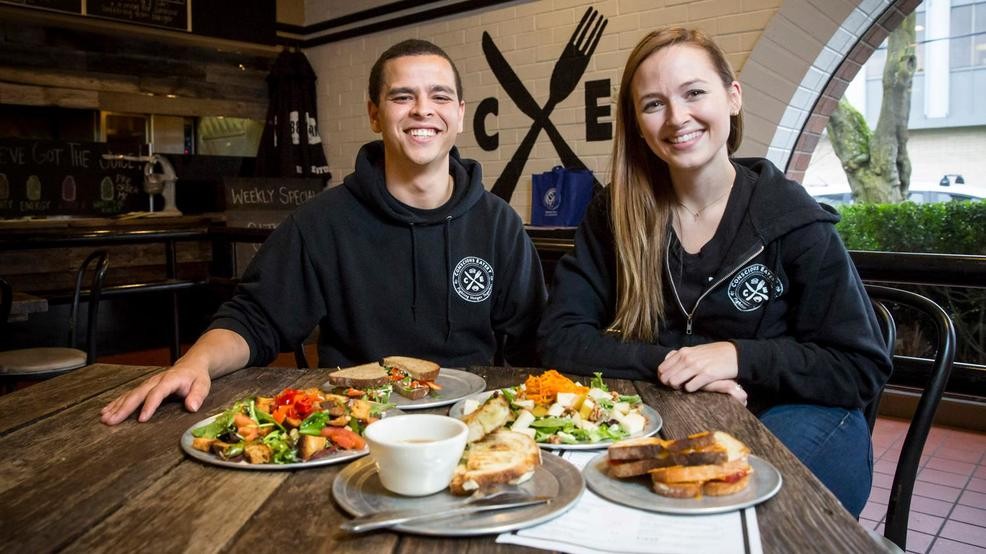 Chaz Rowlan and Cierra Laub, owners of Conscious Eatery, donate one meal to the homeless for every meal ordered at their restaurant in Georgetown. Founded in 2016, the restaurant has donated an average of 547 meals a month through partnerships with local non-profits such as Mary’s Place, White Center Food Bank, and Roots Young Adult Shelter. (Sy Bean / Seattle Refined)
SEE MORE

Conscious Eatery serves customers, and the homeless, with a smile

Fresh food served with a smile is always on the menu at Conscious Eatery in Georgetown. They make artisan sandwiches, fresh pressed juices salads and scratch soups. Customers delight in devouring their delicious offerings and cuddling with official cafe dog, Zander.

Cierra Laub and business partner Chaz Rowlan first met a decade ago when Chaz showed Cierra the ways of waitressing.

"Cierra was a vibrant, energetic nineteen year old when I met her," said Rowlan. "I was a lackluster crazy rambunctious guy - we most definitely hit it off."

The friends stayed in touch, their paths crisscrossing through the years. Together they brainstormed the idea for Conscious Eatery.

"We started it actually as just a conversation. It was something we realized the Seattle area really needed to help supplement what the non profits were going through because they were so strapped because the homeless epidemic is getting up to record levels," said Rowlan.

Conscious Eatery is much more than a regular restaurant. They do "magic math" here too. When customers "make it a meal", one lunch turns into two. The second meal goes to the homeless. They're so hungry to help others because homelessness has had a major impact on both them.

"There's been times in my life where I've had dips in and out of not having a home myself," said Rowlan. "As well as befriending a lot of people who suffered from homelessness."

"Homelessness has affected my family personally," said Laub. "My father and my siblings were homeless when I was in high school."

They savor the chance to hand out their sandwiches to people who need nourishment.

"In the last year we've donated just over 6,000 [meals]," said Laub. "We have 500 to donate this month to St. Vincent de Paul! It's the best part of the job really. It's great to help those in need to see a smile on other people's faces just because they know that that was made with love."

By the way, love is an important ingredient in everything they do here. While both were committed to fighting hunger - Laub and Rowlan realized they were also committed to each other.

Rowlan remembers the special moment when they knew.

"One day we were hanging out talking about the business," he said. "We were actually with a mutual friend - had a great night, probably one of the best nights I'd say of both of our lives - and it easily led to one kiss and that led to the process that started as love."

"I didn't expect it," laughs Laub. "I always knew that Chaz was amazing. I'm just one of those people where I keep my friends really close to me and he was very special to me, always has been. When it happened it was just like automatically I knew immediately like - I've been waiting forever for this person."

"Hospitality and love is number one here," says Laub with a smile.