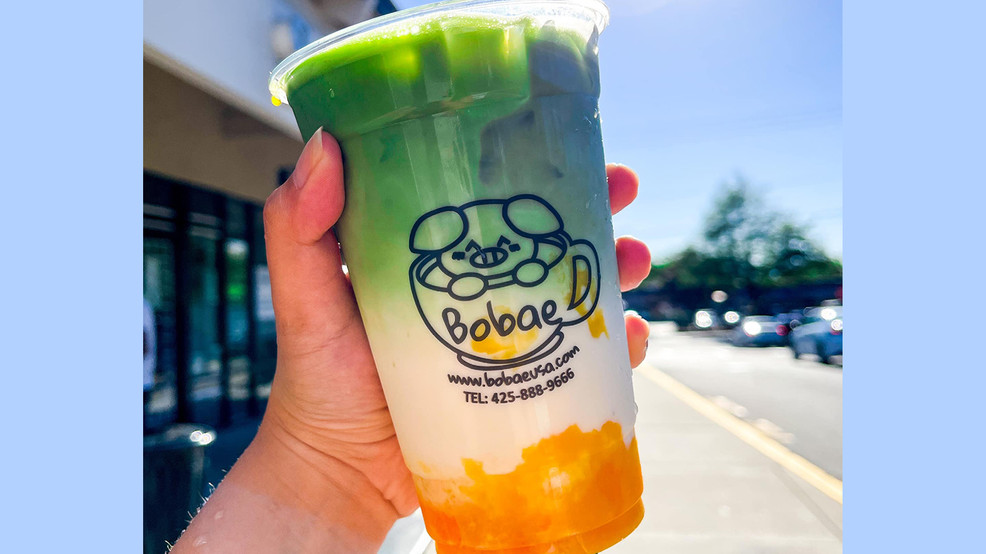 Bobae: A one stop shop for your coffee & boba needs

Walking into Bobae Coffee and Tea in Woodinville for the first time, I immediately noticed a difference. Instead of the usual espresso choices listed on the wall, I found options like Nitro Jasmine Silver Tip Milk Tea, Lavender White Chocolate Milk Tea and Japanese Ceremonial Matcha Lemonade. Before I could even feel overwhelmed, I was greeted by Erica, who was ready and willing to answer any questions that I might have. I went with a Caramel Nitro Cold Brew and was encouraged to try it with a topping called a coffee jelly. Why not?

Located in a former Starbucks location, Bobae serves up beverages made with high quality ingredients, and all of their syrups are made in-house with real cane sugar, organic agave nectar or in the case of their keto line, monk fruit. No chemicals are allowed. They serve fair trade coffee that is roasted by nearby coffee partners. They offer lactose-free milk as well as milk alternatives like oat and almond milk. Even so, Bobae is a little difficult to describe.

“We’re kind of the awkward turtle between a coffee shop and boba shop because we do both,” says owner Karma Lee. “We’re more of a creative café because I change the menu monthly which allows people to be adventurous.”

Karma, a first generation immigrant from Macau in China, opened Bobae with her husband Joey in October 2019, just nine months after they got married. He considers Bobae to be more of an experience café.

“We really like to get to know everybody by their name,” said Joey. “We get to know you as a person and then usually on the second or third time, we know your palate and we know what best pairs with you.”

If you were to ask him what the shop’s best drink is, he’ll counter that with a bunch of questions.

“Do you like sweet? Floral? Fruity? We deep dive into your palate and from there we make two or three recommendations and I think that is why we have such a high success rate of finding the right drink for you because we care.”

The couple agree that no question is a stupid one and they understand that ordering at Bobae might be intimidating at first for some.

“Just be open-minded and allow yourself to be a little uncomfortable,” says Karma. "Just ask your questions, we’re here to answer them. Questions are okay.”

The Lees bring a delightful energy to this place that is already light, bright and definitely pink. On one wall, there is a letter written to themselves that begins with, “We took a journey on this frail and unused path, and here we are at Bobae. Remember how we got here and the people who helped us learn more about ourselves. We are more than just a café, we are a living memory of our past, current, and future handmade into every drink.”

If you look up high, you’ll see three little figurines known as wise men. One is symbol of good karma, one is for wealth and one is a schooler. They are put there to remind the Lees to build good karma by always caring for others. Just below that sits a small Christmas tree, leftover from Christmas. Since all other employees there love the holiday and it’s pink, it stays. On the back wall hangs a glowing neon pig logo designed by Karma herself.

“To me, we are the piggies bringing treasure, luck and wealth of culture to our community,” says Karma. "The name Bobae means treasure or precious in both Cantonese and Mandarin. In the Korean bible, it can also mean faith."

This is fitting since opening the café has been a leap of faith for the couple.

Just then, my order comes in.

“Here’s your Caramel Nitro Cold Brew with our house-made cold brew,” says a Bobae employee with my drink. She continues. “It’s steeped for 24 hours so it’s really infused in there. With the nitro, it makes it really smooth and creamy. We added a splash of half and half in there and some coffee jelly. You’ll want to stir it really good to make sure that it gets mixed in.”

“What you just experienced, we do with every single customer, whether they are six years old or 70,” says Joey, who feels that it is important to present each beverage with a short speech. “I think that just imparting that story to you and that learning lesson brings some value to want you are about to drink.”

When the shop first opened, some customers were thrown off and surprised that the place was no longer a Starbucks. There were more harmful issues, as well.

“We had some incidents where I would make a latte for someone and they will not take it from my hand, but if I had my employee, who looks different than me, hand them their drink, they would just take it," said Joey. "They were being introduced to something that they weren’t used to and some of those people weren’t very receptive to it. But we battled that by killing them with kindness and stellar customer service.”

Bobae was only open for a few months before COVID-19 hit and like so many other businesses, they were hit hard. Sales were down about 90% and they felt a great responsibility to take care of their employees. So, they made a commitment to each other.

“It was one of those late nights that Karma and I were going over the finances and said, ‘What are we going do?’” Joey remembers. “It was awful. So, we took a risk to invest into our employees and we told ourselves that no matter what, we’re not going to let finances be the reason why we have to let anybody go.”

The Lees knew that some of their employees had parents who had been furloughed from their jobs.

“For us, it just didn’t feel right for [us to let go of] the only person bringing money back home because we were struggling.”

It is very important to these two that each drink that they serve contain a little piece of them in it as well. It is sort of a way of letting others experience the Lee’s life stories. For instance, their Mango Sticky Rice drink was inspired by one of Joey’s favorite desserts growing up. He also like to go a little crazy every now and then.

“We did one drink a while back where we took a flaming marshmallow and then dunked into the drink and some customers would record that and post the video on social media. Others would see it and say ‘I want that too!’”

Karma can get a little crazy too. Her latest endeavor is trying to come up with a sriracha-flavored drink, but so far it hasn’t worked out.

“I think it’s the garlic in it,” she says. “I like to come up with things that make people say, ‘How the heck did she think up with that?’” But when it comes to the business, she says that the human connection is the most important. “Joey and I are suckers for the relationship part.”

The Lee’s tell me that some kids want to have their birthday parties here and that they have an older woman who comes in and orders something different every day.

“Somebody left review recently that said, ‘I come here all the time and each time I do, it feels like I’m seeing an old friend and I haven’t in a while,’” says Joey.

“We had a customer say, ‘I’ve gone through some the deepest, darkest times lately – they lost their parents and grandparents all in the span of a year – and I can’t believe that I found a place like this that just makes me feel okay,’” adds Karma.

That’s what they live for. Building human connections.

Want to support more small businesses like Bobae? We're proud to collaborate with Intentionalist, an online guide that makes it easier for you to find/connect with diverse local businesses owned by women, people of color, veterans, members of the LGBTQ community, and people with disabilities.